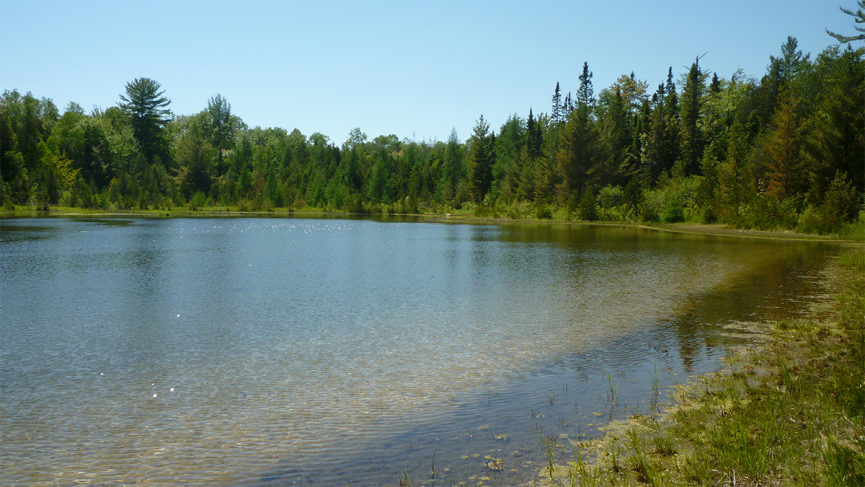 I checked and rechecked my backpack so many times, my wife thought the Velcro and zippers would be wore out. With bow and bait, Gary and I started the mile walk into the Mackinac Wilderness. Our destination was a strategically placed ladder stand, 25 yards from the bait sight.

My first contact with ELO and Gary Morgan was from a laptop at the dinner table of a friend in AZ.in early 2014. I remembered Mike Avery speaking of ELO, and thought this was a place to start my quest for the first hunt in the Newberry unit. A 45 minute phone call to Gary followed, getting his ideas and expertise, and I’m sure he was getting info on my hunting experience. Hunters don’t come with references. Unfortunately six points was not enough to hunt that year. 2015 brought better luck and put a first hunt permit in my pocket.

Arrived in camp a day early to set up the ladder stand and get acquainted with the mile walk and area. I could see that this was definitely bear country.

2015 bear camp was rather unique. The other three hunters in camp lived within 15 miles of each other here in the Thumb. Tom Lounsbury, hunting with a big bore revolver, hails from the Cass City area. Franz Wilding, a fellow bow hunter, lives within three miles of me. We have probably passed on the road many times. We were three strangers coming together to pursue our hunting passion. A passion that Gary and his friend and assistant, Ross Chambers, illustrated by their dedication to walking miles a day, establishing and baiting sites. All manner of weaponry is welcome and the sites are set up for your choice. Gary or Ross would escort and haul bait to your spot in an effort to keep the hunters scent off the bait.

Opening morning found gray skies and pouring rain, but Mother Nature saw to it that the skies cleared early in the afternoon. The day time temperature was in the mid to high 60’s and would continue for the five days that I hunted. The temperatures made it necessary to wear just a tee shirt for the walk to try to keep excess perspiration in check.

That first afternoon, as Gary and I started our hike into the wilderness, it was hard to slow the pace in anticipation of the hunt. The first ¾ of a mile was a relatively straight walk on an old cut trail that over the years had grown back in. At the fork in the trail we made a hard left and worked our way through some trees and tag alder. This section would definitely need the use of “bright eyes” to assist in navigating out in the dark. Emerging out of the tag alders, brought us to the north shore of a small lake. After about 200 yards we worked our way back into the woods. As we approached the bait site, Gary went toward the bait and I went to the ladder stand. I put on my camo shirt and safety harness and climbed into my perch. Thumbs up were exchanged as Gary left me for a six hour sit.

I started this first sit evaluating approach routes and the shear enormity of the “big woods”. This was a lot different than hunting fence rows and small wood lots back home. Within a half hour I spotted movement at the right of the bait. Having watched Richard P. Smith’s DVD, FIELD JUDGING BLACK BEARS, I knew this was a small boar

He moved the logs around to sample the bait and walked off. I thought he was gone but he soon returned. After checking the bait again, he went over to a small pine tree and marked it by rubbing on and walking over it. Then he left. The rest of the evening was uneventful except to enjoy the time in the woods. With flashlight in hand, I followed the, before mentioned, bright eyes out to the truck.

Day two did not bring a bear sighting but I did have a coyote run up to the base of my tree and scamper off. There was nothing in the bait it could have been interested in, but I did note various small rodents running in and around the bait. As night fell, I climbed down and prepared to leave. I only took about four steps and broke a branch under foot. At that moment, I heard a branch break about 25 yds. away, then the woods was silent once again.

Day three brought that same little boar back. He was very comfortable around the bait and only checked the area occasionally for danger.

Gary knew there were bigger bears in the area, so we added a portion of beaver carcass to the bait on day four. The little boar showed up again! This time he checked over the bait until he found the beaver, snatched it up and ran off. He was soon back looking for more. He then made 3-4 trips into the brush and back to the bait. If bears think, he must have thought, if he left and came back, there would be more beaver.

Upon arriving in camp that night, I found out that Tom had taken a shot at a good size bear. Five of us headed to the “gas can” in an effort to find it. Unfortunately, we could not find any sign. Even a day light search turned up nothing.

Day five, my last day to hunt: It was an uneventful evening until just before sunset. From out of the growing shadows came the same little boar. Before he got to the bait, he sat down and surveyed the surroundings. After a minute or so he went to the bait and started to move the logs around to get to it. As darkness fell, I looked for any sign in his body language that there may be other bears in the area. It was getting to the point, that if another bear showed up, it would be difficult to identify let alone make an ethical shot. I decided to break a dead branch from the tree I was in to scare him off. He did not run off but looked in my general direction. I was baffled. I broke another branch. This time he moved to the back side of the bait, laid down with his head between his paws, and looked at me again. At this point, I threw up my arms and called out “are you going to wait for me to leave”? He did not move.  By now it was time to leave so I began gathering my things. As I did so, he slowly melted into the darkness. I told Gary, the little boar, owned that site, at least for now.

A successful hunt?? ABSOLUTELY!! The long walk to and from the stand made it an adventure. The observation and “interaction” with the young boar – PRICELESS.