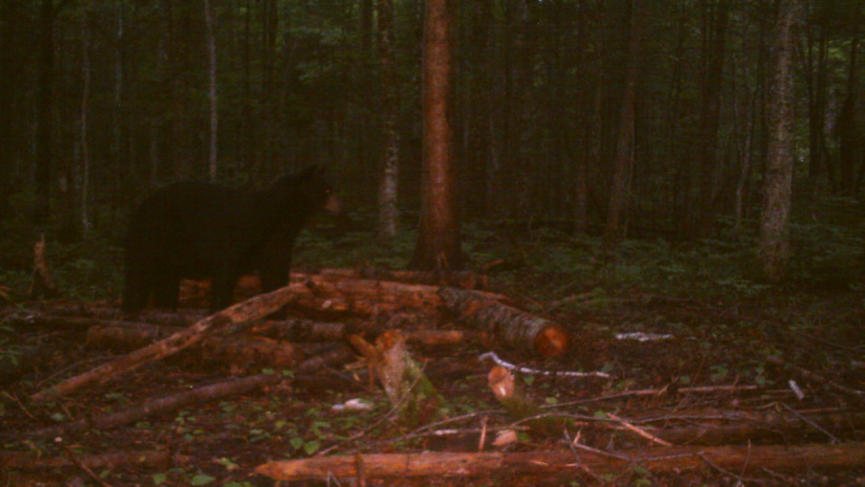 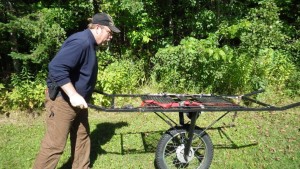 Staring out a window slit for several hours until dark may sound like a boring aspect to some folks, but I’ve never been bored waiting for a bear to show up, which can happen at any time and it is truly amazing how an animal so big can suddenly materialize without making a sound. Unlike deer with hooves, bears move about on soft foot pads, and their dense fur glides silently through the brush. I spend my time admiring the flora and any critters that may appear, and stay focused. I even named a pair of ravens that were constant visitors “Heckle and Jeckle”.

Part of my time was spent applying layers of clothing to my upper torso as the sun slipped down and the temperature dropped. Due to the lengthy walk in at a brisk pace, I was dressed down to avoid overheating and sweating. My extra layers were carried in a Browning “Bear Dry-Pack” (www.browningpacks.com) that is not only waterproof but can keep contents compressed (it has an air valve for releasing air) and scent-free as well, an important factor to me in this environment (this pack is going to be great for waterfowl hunting as well). Also in the pack were my (made in the U.P.) hunter orange Stormy Kromer cap and Rapid River Redi-Axe/Skinning Knife combo set, not to mention my binocular, spare flashlights, folding saw, water, snacks and survival necessities.

I was seated in a comfortable plastic deck-chair and nothing happened until just before dark that first night, and right after a brisk rainstorm. A horde of raccoons showed up and hit the bait, and were having a high old time. Suddenly they all stopped what they were doing and stared intently off to my right, the direction Gary Morgan had said the bear would probably come from, and the raccoons quickly vacated while I went on full alert. However no bear came into view and soon it was a very dark, moonless night when I unzipped the blind, which in the dead still atmosphere, sounded like a brass band, and then I had to re-zip. My instincts told me this unusual sound might clue the big bear in that something might be amiss, but it is what it is, and I’d stick with it, because it was a marvelous site, and for some reason I thought I could feel the big bear’s presence close by.

I was thankful for a good headlamp that allowed me to keep my hands free while I made the long walk out and I was very appreciative of the reflective tacks that kept me on the trail and accurately guided me on the faint foot trail through the dense foliage to my Jeep. The next couple of evenings were uneventful, except for what I believe was possibly a wolf that “wuffed” in a canine fashion suddenly near my blind and then snuffled up close around the back of it, but I never saw whatever critter it was. It was on my last evening of the hunt that matters finally came to fruition.

About two hours before dark, a small (100 – 150 pound) black bear streaked past the bait, and suddenly I could see “Gas Can’s” big head and blonde snout appearing from the right and staring after the fleeing smaller bear. Gas Can then turned his head and stared hard at my window slit for several seconds, and then he vanished. In a matter of minutes, I spotted another bear running straight away and Gas Can appeared in hot pursuit, then stopped and intensely stared back over his shoulder once again at my blind’s window slit. Then he banked to the right and disappeared. Nothing would happen again until into the final hour.

It was clear Gas Can making an appearance was only to keep the other bears out of the goodies until he could feed in his normal pattern after dark. I had just figured he was history when another bear went streaking past the bait and Gas Can lumbered into view and stopped behind the trees at the bait. Only his head was showing while he stared after the fleeing bear, and this time he was close enough that I could hear him clicking his jaws in agitation. He then turned his head and stared at my window slit, and then backed out of sight behind the tree-trunks. Needless to say, Gary Morgan had placed me in the vicinity of a passel of bears, and that worked fine for me!

Suddenly Gas Can popped out again like magic and threw his front paws up on the logs covering the bait and stared right at my window slit while still popping his jaws (a real distinct sound, trust me), and then he performed a backward lunge that caused him to disappear completely behind the tree trunks. He then repeated the same move and both times I wasn’t offered what I felt was a proper shot with my revolver. The third time however had him completely leaping out and on top of the bait logs with his head lowered and staring hard in my direction. He was slightly quartering toward me but offered a good enough angle if I hit him in the leading edge of his right shoulder with the bullet heading through both lungs for the center of the ribcage on the off side, and I had complete faith in the (325 grain) Cor-Bon ammo in doing its part.

As soon as the crosshairs of my scope were locked on the right spot, I touched the trigger, and at the shot, Gas Can was a blur as he dove off backwards and disappeared to my right. I waited a bit and didn’t hear the “death-moan” bears sometimes make just before dying. With darkness creeping in, I went to the bait and checked for blood, but there wasn’t any, which isn’t all that unusual with bears that are covered in body fat and coated with thick fur. I knew I needed help in sorting matters out and I made the usual 30 minute hike out in only 15. Besides my two guides, Gary Muska and Franz Wilding also came along without hesitation to lend a hand in the search, for which I am very indebted to them. We were bear camp buddies (and “Thumbkins” as we were called up there) to the bone.

It is an interesting matter looking for a possibly shot bear in the middle of nowhere with flashlights providing the only light on a dark, moonless night, and there is nothing boring about it at all. Gary Morgan directed a fine grid-type search while a Coleman lantern was resting on the bait as a beacon to effectively work our efforts out from. No blood was found or a bear. A daylight search first thing in the morning proved the same, that it was a complete miss. Personally I’ll take a clean miss over a bad hit any day, and I was relieved that we didn’t find a dead bear after daylight that might already be spoiling due to balmy weather.

My only excuse is that I believe Gas Can may have been doing his sudden backward lunge just as I touched the trigger. It is after all hunting, and I will never know for sure what happened, but just the same, I had a great bear hunting adventure that will never be forgotten. I also made some new friends I’d share the field with again anytime.