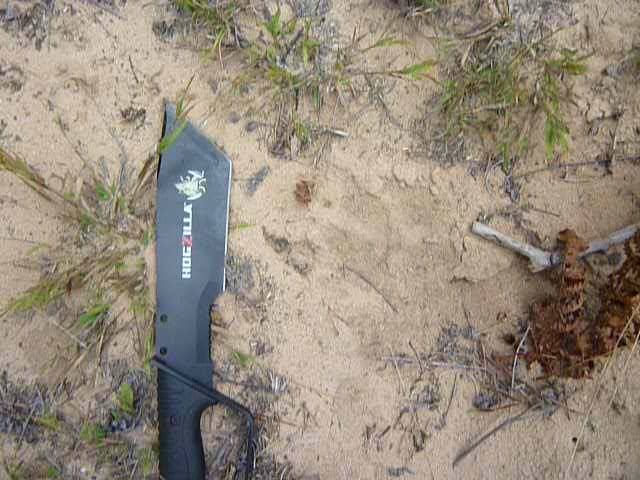 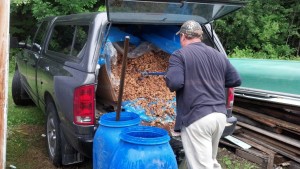 The spreadsheet showed a busy schedule just around the corner as several small groups of hunters booked with us for the upcoming season.  The other spreadsheet showed what was behind us – year-round scouting results.  Our scouting in Michigan’s Upper Peninsula usually begins in early May.  You see, we wait until the snow melts in the heavy timber, but not too late to allow for a full blown black fly and mosquito hatch.  After ‘the hatch,’ the next tolerable field work depends on weather patterns, usually sometime in the later part of July.  I remember a number of years ago when I completed scouting according to my schedule and not ‘the call of the wild.’  I swear I can still feel a black fly gnawing at my eye brow.  Wait a bit longer and the black flies make way to the wood ticks.  Oh joy!  Anyway, our scouting results get cataloged on a spreadsheet.  This tabulation has proved very valuable throughout the years.  After all, Sergeant Friday would approve of our method….“Just the facts…”

As I made my third trek down what could be the start of a foot path, I knew this bear hunt spot would be a dandy.  It had all the makings of success: far away from any human activity, a nice water source on one side, a swale on the other and a beautiful down-wind approach for the hunter.  As I approached my potential hunting spot, I could see that the bait was hit.  I emptied the bait from the small bucket into the crevasse under the large log pile.  The logs were repositioned.  Then off came the backpack.  It was time for a scent reapplication and then a realization that I should’ve checked the trail cam beforehand.  I resisted handling the trail cam, making a mental note of reversing my order of application the following day.  Absent of a picture giving me affirmation of a good spot, I noticed fresh bear scat again.   Good enough.  The next trip back I would add a portable blind to my carry.  I meandered my way out through a rough marked trail from the bait to a pipeline.  I decided to exit from the wooded terrain onto the pipeline about twenty yards south of the entrance.  I skirted a small raspberry hedge and noticed more bear scat.  This sign was probably a few weeks earlier since the berries had been absent that same time period.  My thoughts were, “Cool! I’ll pick up where Mother Nature left off.”  With a hefty baiting schedule ahead of me, I began my trek back to the vehicle.  I was no more than a couple hundred yards from that has-been berry patch and noticed a fresh lay of canine scat…right in my newfound foot trail.  My senses went quickly from looking around to see what (not who) was watching.  With a ‘coast is clear’ lift from my shoulders and the hair relaxing on the back of my neck, I flicked the scat a few yards off my trail and continued with my brisk walk.   Down the pipeline I continued, making a mental note of what I carried in my backpack.  I remembered from last year the ramifications of not hydrating myself often enough during the bear baiting, so retrieving a water bottle was in order.  Besides, my glasses were just about glazed over from sweat and needed a fresh rinsing, not to mention I didn’t need to give my brother any reason to question my ability to recognize the difference between wolf and coyote scat.

The sun in the sky coincided with the clock in my pickup and about a dozen miles later I was back at camp.  A long look out over the lake proved a better day to be fishing than carrying bear bait to all those spots on the spreadsheet.  The neighbor had it right.  He was filleting a mess of fish caught earlier that day.  He knew what my question would be so he quickly asked, “Did you notice the two pair of nesting swans out front?”  Damn if he wasn’t rubbing salt in the blisters on my feet.  Then he suggested I stunk.  I smiled against his compliment and left to change out my baiting clothes before they became adulterated with late summertime camp smells.  Running the small boat and outboard out to the hotspot would have to wait.  I once ran the idea past my brother of baiting up a remote spot across the lake.  I told him I could troll for dinner on the way over and back, but he didn’t seem to think I could separate the two outdoor activities from each other.  (Fishing and bear baiting!)  He mentioned the time I brought the famous Pocket Fisherman on a deer hunting trip.  The idea was to tie a weighted cloth on the end of the line, saturating it with buck lure and casting it out to a nearby scrape line. You know the rest of the story.

The next day arrived in style and without an alarm.  I guess keeping myself hydrated while watching Detroit Tigers baseball has its delayed downfall.  After changing back to my bear baiting formal wear and loading the pickup with containers of Mother Nature’s replacement, I was off and running.  One thing I’ve learned from others is that bear baiting is an individualized sport.  Most everyone has a common base of what works best and then customization from that point.  I guess I’m no different.  Changing the order of which spots get baited first, etc., is something that I like to do to mix it up a bit.  My baiting timeline remains relatively the same, with me eating first, of course.   As I drove two miles to the end of a two-track, I noticed no other tire tracks but my own.  As I backed my pickup into the same spot, aligning my mirror with the small hemlock tree, I began to think about the posturing taking place back on the pipeline.  Like it was scripted, I found another canine scat pile in the same place as the day before.  I was determined to defeat the competition, therefore, I kicked the pile aside and one upped him, leaving my own scat behind, in the exact same spot.  As the entry into the woods became more apparent each day, I found a spot about a hundred yards away from the bait that gave me a heads up of that area.  Again, the bait site was disturbed.   I approached to find the morsels completely gone.  My memory bank told me to swap out the SD card in the trail cam first.  I again baited and “in-scent-ivized” the immediate area.  Heading east, I stopped to brush in the popup blind.  I knew the next day I would be baiting and carrying in a portable chair.  Never waste a trip.

As I arrived where the woods meet the pipeline, I stopped to catch a glance of the open area.  Something said, “You are not alone.”  I looked and looked, but nothing.  My next move was to step over a small mud hole, remembering that I stepped in it on my way into the woods.  I looked down and saw a fresh imprint inside my own boot print from not more than half an hour earlier.  I thought to myself, “Where there is one…”   By the time I arrived back to my vehicle I had developed a game plan for this particular bear bait.  It was almost like I was trying to see if the local bear would help me get rid of the gang-stas.   After supper and during the Tiger game I remembered to check the swapped out SD cards.  What was thought to be a great bear hunting spot proved otherwise.  As I viewed all of the pics at the spot I called “Pipeline” it was obvious I was losing the posturing battle.  Mr. Black Bear wasn’t helping either.  We were both giving in to the neighborhood bullies.  The following day, it was scat for scat as my own was displaced, advantage canine. I continued my baiting routine two more times.  That last day I retrieved my popup blind and chair.  On my walk back to the vehicle, there it was again in the same spot. More scat!  ‘Checkmate’ – they win. When I returned to my vehicle, I sat there with the printout of my scouting spreadsheet.  My eyes scrolled down to the “Pipeline” hunt spot.  I noticed plenty of data pointing to a beautiful hunting spot, noting a nice natural shooting lane, nice downwind approach, etc.  However, my scouting data noted otherwise.  In the spirit of “just the facts,” I drew a line through Pipeline.  Hunter: 0, Canis lupus (wolf): 1.