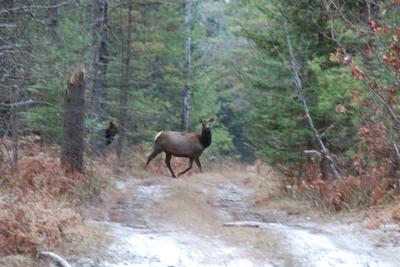 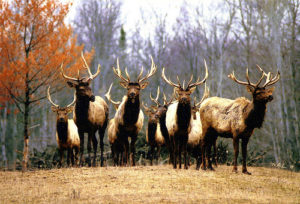 One of my bucket list dreams has been to get lucky on the draw for a Michigan elk license. I have been faithfully applying each year since 1984, and getting long in the tooth, it was my hope to receive a Michigan elk license while I could still put one foot in front of the other. Needless to say, folks, I was euphoric to the core when I went online in early July and discovered my dream had finally come true. At the time, I didn’t know whether I had a bull or antlerless tag (I had applied for “any elk”), or whether I had the early or late elk season. A large envelope from the Gaylord MDNR arrived the following week which solved the mystery. I was successfully drawn for being able to receive an antlerless elk tag in “Area X” during the early Michigan elk season, which would open on September 1st.

Of course, I would have to jump through some hoops before receiving the actual elk tag, and due to the ongoing Covid-19 Pandemic, a whole lot has changed for this year’s elk season. One of the things I would have truly enjoyed was the pre-hunt seminar successful elk hunting applicants had to attend the day before the hunt began, in order to receive their elk tag. It was always a festive affair, even with a MC on hand, and where elk hunters could meet each other. It was even attended by folks who weren’t successful on the draw, who were simply there to enjoy the atmosphere, filled with anticipation for this very unique hunt.

Due to the social distancing factor, I had to go online to do the seminar and watch a half dozen videos explaining all aspects of the hunt. They were very well done and informative, and I did enjoy watching them, but when compared to the old (festive) seminar, I found it to be a bit impersonal, and yep, folks, it sort of popped my bubble, so to speak. I also discovered during all this, the famous “Elk Pole” where elk had to be brought and checked in, and folks enjoyed viewing everything, isn’t happening this year due to social distancing. Bummer! Instead, a MDNR team would have to be notified, and they would come to the kill site to check the elk.

After watching all the videos, I then had to fill out an online affidavit, stating that I had watched and fully understood all. I would like to add here, that I had a few questions, well, maybe more than a few, to make sure I was doing everything right. The Gaylord MDNR employees (most of whom are working from home) were really great to work with and always returned email and/or phone calls, to which I am very grateful.

One of the things I had to fill out on the affidavit was the description and caliber of the gun I was going to use on my elk hunt. My original choice was my “pet”  T/C G2 Contender rifle using a scoped barrel in the wildcat .375 JDJ caliber, which is a heavy-hitter firing a 270 grain Hornady bullet. It is a combination I have used for some time now and am very familiar with. However, during practice on the shooting range, I encountered a misfire, with the primer having only a slight dent in it. It didn’t happen again, but once was enough for me, and I sense a possible firing pin issue that will have to be thoroughly checked, but with time running out, I would have to select a different rifle. The last thing I need is a misfire on possibly my only opportunity to ever successfully bag a Michigan elk.

The rifle I now will be using is a Ruger American bolt-action in the relatively new (developed in 2007) 6.5 Creedmoor caliber. Designed originally for long range target shooting (including 1000 yards), it is a very flat-shooting round which offers a mild recoil. Due to a long and slender .264 diameter bullet, it offers a great ballistic coefficient, and has gained a dependable reputation in the hunting field for everything from varmints to deer and even, of course, elk. For any doubters about this caliber for elk, I will point out the 6.5 x 55 Swede (developed in 1894), which is basically a ballistic twin to the 6.5 Creedmoor (but using a longer cartridge case than the 6.5 Creedmoor) happens to be the favorite hunting round in Sweden and Norway for not only harvesting reindeer, but moose as well. With proper bullets designed for hunting, the 6.5’s will get the job done, especially with proper shot placement (which is a point of fact for any caliber).

The ammunition I have selected for my 6.5 Creedmoor, is the Hornady ELD-X, 143 grain “Precision Hunter”. The rifle is topped with a 3-9X Leupold “VX Freedom” scope, featuring the real handy and durable Leupold magnetic scope-lens covers. When it comes to shooting optics, Leupold has long been my favorite. I have also equipped the rifle with a Slogan Outdoors rubber sling, and this is the only  gun sling I have used for many years because it is tough, weatherproof and doesn’t slip off the shoulder when least expected (I won it in a raffle, and it has never worn out, despite hard use).

A very important shooting aid I also count on for an in-the-field stabile shooting rest is Primos “Trigger-Sticks”, and I have and use all three types – monopod, bipod and tripod, and I will have all three available for my elk hunt, to meet the need. I have discovered that the older (and wiser) I get, is the importance of having a stabile shooting rest, such as “shooting-sticks”, on hand for making an accurate shot, especially from a standing position.

Now that my “elk rifle” is sighted in, my shooting practice no longer requires a shooting bench, because such isn’t usually available while hunting. My goal now is to duplicate shooting applications that could be encountered during my hunt. This includes offhand, kneeling, sitting, prone and using the shooting-sticks.

My present primary practice tool to tune up my shooting eye is actually a .22 rimfire rifle topped with a 3-9X scope (very similar to the elk hunting arm), and my favorite “plinking” target is a Birchwood-Casey steel plate affair that spins when hit. I learned a long time ago, that when I can dependably hit my mark with a .22 rimfire (which is more economical to shoot), I’m assured that I can basically do the same with the bigger bores.

Other pre-hunt preparations I’ve done is reserving a very knowledgeable elk hunting guide, John Jones of Atlanta (Michigan Bear-N-Elk Hunting Adventures). Guides typically know the lay of the land, including property boundaries, and where the elk are likely to be. They are also readily able to assist in getting an elk, which on average, will weigh as much as five whitetail deer combined, loaded up and out of the woods. A good guide is well worth the investment in this arena, trust me, folks.

Also very important, is having a proper place featuring a cooler to get the elk carcass into right away, as well as being processed in a timely fashion. This is very important during Michigan’s early elk season, which usually features balmy weather, and elk being large animals, will quickly heat up and then readily spoil if special steps are not taken. Due to the ongoing pandemic, a majority of Michigan meat processors have an overabundance of custom slaughter animals coming in, and many processors have backlogs of customers they have had to schedule for a later date. Fortunately, Northern Deer Processing of Atlanta, has assured me that they can handle my elk, if I am fortunate in bagging one (it is, after all, known as “hunting”, and with no guarantees).

My goal is to bag a plump cow elk, and I’m real excited about experiencing this very unique Michigan adventure.

While I may not be bringing any antlers home, if I am successful, I am truly looking forward to the elk meat, which happens to be one of the finest from a big game animal you can ever dine on. I do plan on allowing the elk head to be taken from the kill site by the MDNR team for testing, but not before I remove the “ivories” from the upper jaw, which are truly ivory. Elk at one time, way back when, had tusks, and the “ivories” are related to this fact and both cows and bulls have them, and they can be used as fine items for jewelry, and I fancy bolo ties!

Last week, I received a thick envelope in the mail from the Gaylord MDNR Office, and it contained my antlerless elk tag, as well as marking tape for the kill site.

That is when reality of this very special elk hunt about to be, really set in for me. Yep folks, I am ready and waiting!