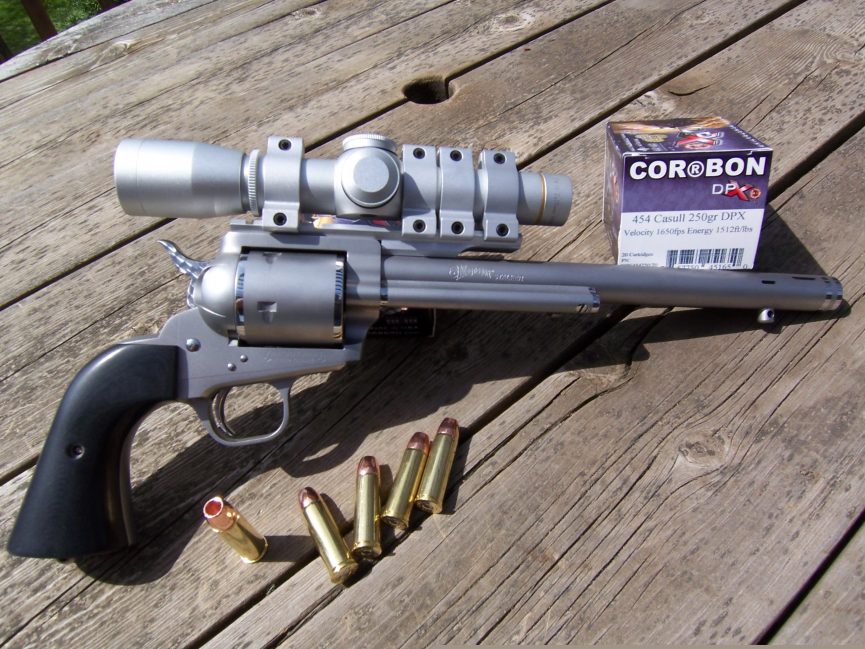 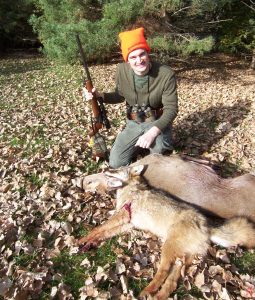 The older I get; the more time seems to fly because it doesn’t seem like it was 14 years ago when I finally got my “bucket list” gun and couldn’t wait to use it during the local firearms deer season. When I ordered my Freedom Arms .454 Casull revolver, I had to wait 9 weeks for it to be built, because Freedom Arms builds them only one at a time. Once I received the revolver it was then taken to Ken Kelly of Mag-Na-Port to be ported for recoil, as well as be fully customized, including a trigger-job (Ken Kelly is an award-winning gunsmith who does fantastic work). With a 10-inch barrel which is topped with a 2X Leupold handgun scope, it proved to be a superbly accurate piece which truly packs a punch. Legendary handgun hunter Larry Kelly (Ken’s late father) used a revolver and scope identical to mine to take lions, Cape buffalo and even elephants in Africa. Putting whitetails down for the count with this big bore is obviously a no-brainer, that is, if you can accurately hit what you are aiming at. In my opinion, the Freedom Arms revolver is one of the best built handguns in the world.

Memories in the field are often about successes, but sometimes they are not. Whenever you watch a hunt put nicely together for a DVD or outdoor television series, or read about it in an article, the hunter featured usually bags the quarry in an efficient manner. Often left out are the human error flubs and other challenges en route to the successful ending.

Take the opening morning of that ’09 firearms deer season I had been counting the days off for, to give my new revolver a thorough workout. Daylight was just brightening up the day when I heard my son Josh fire his single-shot T/C Encore 20ga. This was abruptly followed by another shot, and I began to ponder what was up. Josh is a crack shot, and I was certain he had something down, but that second shot had me wondering. There is that old saying – “one shot means probably, two shots mean maybe.”

Half an hour later, curiosity was killing me. Even though your kids are grownups, you still wonder if they need your help, especially after those two shots, and I was soon climbing down out of my ladder-stand to check matters out. Experience has taught me not to stride right over as if I’m on a walk in the park. Instead, I began constructively still-hunting, a favorite hunting technique of mine, where you use your eyes more than your feet, and take every step very carefully. I had covered about half the distance to Josh in his ladder-stand when during one of my long pauses I noticed the motion of a white throat patch, then the eyes, and then the large rack came into focus through a hole in the brush. The buck had no idea I was about as he gazed in the direction of some shots echoing in the distance. I used my binocular to determine the standing buck was facing directly away, and it wasn’t a shot to take. I slowly dropped to one knee like a mime performing a slow-motion act and brought out my doe in-heat-bleat can, which I used to send out a long blat. That is when the doe I didn’t know was just laying behind the buck, jumped up and started coming towards me. The buck, in a perplexed attitude, started to follow her.

Well folks, I’ll state right here, that when it comes to encountering bucks, especially very big bucks, I’m not the calmest cookie in the jar. My pulse picked up while my focus became intense, not unlike a cougar ready to pounce upon its prey. I’ve been there before many times, and it gives you an inkling of being a predator.

Then the doe glanced in the direction of Josh’s ladder-stand, and I knew my son was probably on the move. The doe abruptly turned, and the large buck instinctively clued in. He didn’t get that big by not catching on when a doe’s reaction meant something was out of place. He had learned that early on from his mother, and this buck was no fool because he led the way out of there.

And wouldn’t you know it, right back toward where I had just left.

I had some distance to cover on an angle to intercept the deer and I moved out to a handy lane and took off on a sprint which included hurdling over a downed dead elm tree. Not a very big dead elm, mind you, but big enough that it took some effort for somebody that is a bit long in the tooth, as well as being a bit, well, “husky”. Doing a 150-yard sprint in a bent over position just below a handy hedge, is an interesting proposition. Adrenaline helps a lot, especially when you remember you had to hold your breath that morning to tie your boots and got a little dizzy in the process.

I ended up right back at my ladder-stand when the shot came into being. The buck had just arrived and was standing directly broadside 50 yards away. A honeysuckle bush between us made him appear like a black-formed ghost in my dreams. Had I remained in my stand, I would have had a shot without the honeysuckle bush. I also would not have been wheezing like a racehorse just passing across the finish line. By understanding the body language of deer, I knew I had to respond quickly, because the buck was only briefly stopping before deciding his next move.

I used the tree-trunk my ladder-stand was attached to for a more stabile brace for my revolver and placed the crosshairs of the scope right on the buck’s shoulder through the honeysuckle bush, held my sharply wheezing breath for a brief second, and lightly touched the trigger.

The buck abruptly whirled around at the shot, and disappeared into the thick cover, and I was left with that great mystery as to whether my shot had been true. I then returned to my original objective, which was seeing if my son needed assistance. The buck I had just shot at would require some patient waiting time before a follow-up tracking job anyway.

I soon discovered Josh was doing just fine. His first successful shot had been at a coyote which had been directly underneath his ladder-stand. At the sound of his shot, a large doe stood up nearby and Josh successfully downed her, as well. Josh was in the process of tagging and field-dressing the doe when I arrived.

After helping my son get the coyote and doe out of the woods, I placed Josh at the “backdoor” while I went into the heavy cover to locate the large buck I had shot at. My vanity said I would find him lying there. Reality, however, let me know the facts would speak for themselves.

There was absolutely no blood or hair to be found at the site where I hoped the buck would be lying nearby. A thorough grid-search revealed nothing as well, and Josh didn’t see anything trying to sneak out the backdoor either. It was clearly a clean miss, maybe due to trying to push the bullet through a screen of brush, or the fact that I was wheezing when I locked on with the crosshairs. One thing is for certain, it wasn’t the fault of my fine hunting revolver.

The next day I spotted that buck in the distance with my binocular, and he was doing fine. I doubt if I had any effect on his busy dating itinerary, and as before, the present doe was following him, instead of the other way around. He was obviously quite the Romeo!

One thing I’ve come to know after many years of hunting, no matter how well the firearm and ammunition, and the practice entailed in getting to know the combination, everything doesn’t always fall into place like a written script. Misses occur, even those fantastic and unforgettable misses. Yep, folks, such are also included in those fine hunting memories.

When it comes to missing, I’ve been there and done that and no doubt will do it again. That is why it is called hunting, and I do love it so, no matter what.