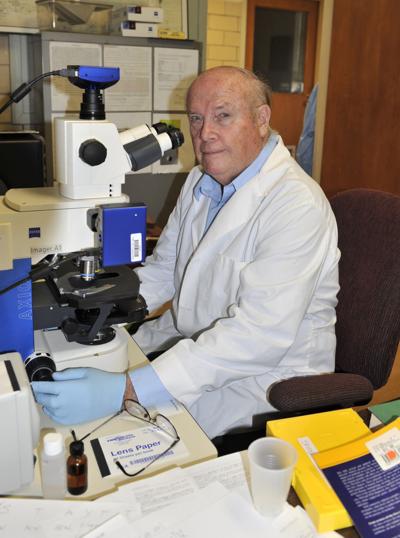 Unified Sportsmen of Pennsylvania (Unified or USP) and Louisiana State University (LSU) have recently entered into a mutually beneficial agreement to raise research funds for Dr. Frank Bastian toward eradicating chronic wasting disease (CWD) from Pennsylvania and throughout America and protecting human health. Unified has taken the national leadership role on The CWD Project. (Visit www.gousp.org to join the partnership.)
Impacts of CWD. CWD is a fatal neurological disease of deer, elk, moose, and other members of the cervid family of wildlife. It is rapidly expanding throughout America, killing these animals in its wake. CWD now exists in at least 25 states and some provinces of Canada and is beginning to spread worldwide. CWD was first identified in Pennsylvania in 2012. Since then, it has continued to spread within the state and is now on the edge of the Pennsylvania elk range. Both deer and elk are vulnerable in Pennsylvania, and long-term studies in other states indicate that if there is not a dramatic change to our current CWD disease management approach, we will face the effective extinction of deer and elk in Pennsylvania – lasting for generations and likely a century.
Once infected, deer can appear healthy in an incubation period for 10-18 months with no visible signs of illness.  In late stages, symptoms from brain lesions quickly manifest into aimless wandering, falling, drooping ears, and excessive salivating. Death soon follows. Our spectacular elk area and visitor center may soon stand empty of elk and visitors. The tradition of sport hunting as we have known it will end, placing at risk our Second Amendment. The impacts to outdoor recreation, tourism, and the outdoor industry will be staggering. Economic impacts across the state and within rural communities will be measured in the tens-of-billions-of-dollars, and across America it the trillions-of-dollars.
CWD Scientific Breakthrough. For decades, the mainstream theory has claimed that CWD is caused by a
malformed protein called a prion, and that there is no cure for such a prion disease. This theory became
mainstream when it was discovered that prions are always found to be present in infected animals. However, after decades of intensive research, Dr. Frank Bastian, an M.D. and neurological scientist at LSU, has discovered that prions are not the cause of CWD. The disease is caused by a previously unknown, tiny, wall-less bacterium called a spiroplasma. Prions are simply a by-product of bacterial action by the primary vector – the bacterium.  Unified’s CWD Project. This breakthrough discovery is a game-changer, in that it is now possible to develop a vaccine – an antibiotic – to prevent and cure CWD. Unified Sportsmen have begun a funding initiative toward raising $100,000 in each of three years that will permit Dr. Bastian to solve the disease in three steps:
1st. A diagnostic Hunter Test Kit will be developed for testing in Pennsylvania within a year – permitting hunters to immediately test their deer in the field at the point of harvest. If a hunter wishes, the test kit will also work in testing humans for the presence of CWD infection. This Test Kit is important in preventing hunters from eating infected deer and for protecting human health.
2nd. An injectable vaccine will be developed to protect captive herds of deer and elk – a possible last stand in saving the deer-farming industry.
3rd. A second oral/nasal vaccine will be developed for administering to wild herds of deer and elk.
Upon Unified’s successful testing of these CWD-preventative products in Pennsylvania, we will distribute them and train other state agencies throughout America, thus making Unified’s CWD Project a National Demonstration Project that will place Pennsylvania as the leader in stopping this dreaded disease.
End CWD now or endure the consequences. With Dr. Bastian’s discovery and on-going research, we now are set on a path to end this disease and pending nightmare. Without his breakthrough research, the on-going threat to deer and elk in Pennsylvania and North America is a catastrophe in the making. The resulting impacts to natural ecosystems and our environment from the removal of our dominant herbivores is incalculable.
As catastrophic as are these CWD impacts, without Dr. Bastian’s continuing research things will get worse — much worse. Dr. Bastian has discovered this CWD bacterium in domestic sheep and cattle (Mad Cow Disease), and CWD-related diseases have appeared in other wild animals including mink, camels, and big cats — placing lions and tigers in the cross-hairs. This is not likely the end of the list of animals that are at risk and, if not now contained, the bacterium could spell disaster for worldwide natural ecosystems as we know them.

Now let’s throw gasoline on the fire — humans may be at risk. Scientists have found that some species of monkeys, our close primate relatives, are susceptible to CWD. Dr. Bastian has discovered this bacterium in association with other similar neurodegenerative diseases in humans, especially Creutzfeldt-Jakob Disease (CJD), and he is pursuing a linkage with Alzheimer’s Disease, Parkinson’s Disease, and ALS (Lou Gehrig’s Disease). Once CWD has been fully addressed, Dr. Bastian’s research will extend into this area of human health, and his discoveries will open the door toward pursuing cures for these and possibly other human neurodegenerative diseases.  CWD Partnership. Dr. Bastian’s discovery is historic and may be one of America’s most important conservation and human health achievements. Unified has created a private Sponsored Research Partnership to provide the opportunity for other concerned organizations and individuals to participate as partners in this historic effort. As such, Pennsylvania citizens now stand as a national firewall toward ending the disease. Please join the members of Unified in supporting Dr. Bastian’s potential Nobel-Prize-winning research. The future of deer, elk, and moosedepend on the research of Dr. Bastian, and his research may depend on the success of our Partnership.