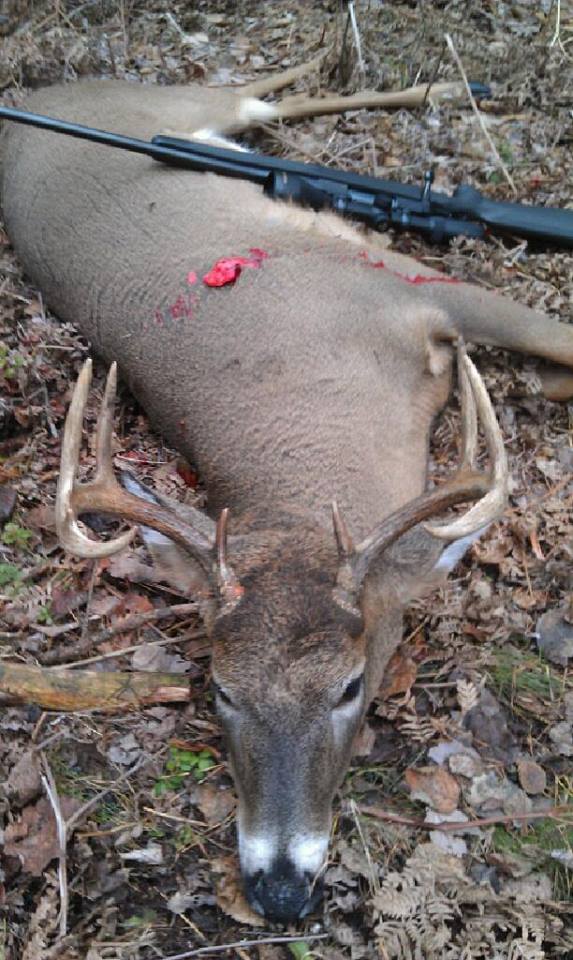 It all began with a phone call from a fella in Florida’s swamp land.  He identified himself as Chad, bearing that distinct southern accent that told me: “this guy ain’t from these parts”.  He wanted to know if this was East Lake Outfitters from Michigan.   I quickly learned he was inquiring on a guided deer hunt that his girlfriend found while searching online.   She apparently found a posting of a fundraising campaign in Michigan.  This fundraiser was put on by a local charity in my home town raising funds for youth activities, which East Lake Outfitters had donated towards the cause.    Chad explained that his girlfriend bid and won a hunt for a party of four hunters.  It was from that point that a friendship began to develop.

As the days closed in on hunting season, so did the frequency of calls from Chad.  I emphasized that once they arrive in camp he and his buddies would be taken care of…no exceptions.  They booked their flight to Michigan, rented their vehicle and eventually arrived for the second week of Michigan’s deer/gun season…U.P. style.  Of course, I knew they would have to be in the U.P. to fully take in what that reference honestly stood for.  On their arrival day Chad kept the East Lake Outfitters abreast of most every town they cruised by on the interstate as they embarked towards the Mighty Mac.  Once they cross over into the U.P. the trip was nearly complete…about “not quite an hour” before their arrival.   The Floridians from the swamp arrived just after darkness set in.   Our acquaintances at breakfast the next morning gave rise to possibly test firing the rifles for accuracy.  After a lengthy discussion of the pro and con we decided to see if the baggage handlers threw off any scopes.  Three of the four were spot on…it was the one that needed some tweaking that caused the delay…as Chad’s good buddy, Mike, said.   Of course, Chad whispered that the gun needing some tweaking belonged to Mike’s son, one of our guest hunters…’nough said, time to go hunting!

Three hunters were escorted to their hunt spots, with, of course, Chad being the last person to be shown his spot.  I recall it being close to 9:30 AM when we began our trek down the ole’ two track.   I explained to him that there was a decent chance of seeing deer near his hunting spot since buck sign was quite prevalent.  Sure enough the ‘Swampster’ witnessed a young buck standing right where I referenced…but, not for long and no shot opportunity.  Once all the hunters were nestled I meandered back to camp to finish chores.  A waiting game would always begin once everyone was out hunting.  I kept my cell phone close, as monitoring text messages were the instructions of every hunter.   When hunters had texting capabilities it was a blessing – no need for mid-day two way radio checks.

Kitchen-kat duties began with the dishes from breakfast and tea-n-crumpets of the evening before.  I learned from past gigs that organization is the key. With that in mind a delicious roast beef dinner and all the trimmings were put in a large crock pot and set on low.  I began looking at a homemade bread recipe to compliment when a knock at the door was timed perfectly.   My neighbor across the two-track opened the door and gave notice.  When Stan walked in bearing a gift I couldn’t hide my smile…a loaf of fresh bread handcrafted by his wife, Kay, was ‘the ticket’.  After Stan and I solved the problems of the world our conversation trailer concluded that the weather in the U.P. remains a mystery.  Typical of Stan, he was off to his next item of the day, but not before I made sure he was reminded to tell Kay ‘thanks’.  Along with checking weather.com ‘one more time’, I checked my cell phone and noticed a couple of new texts.  It was at this time that the remainder of the day changed…Chad’s message:  ‘buck down’…with ‘pic’ attached.

Instructions were given and Chad chose to stay put until dark to respect his hunting buddy’s remaining time in the woods, as their proximity warranted caution.  My constant reminder to clients:  Whitetails in the U.P. do not tolerate foreign odors like their counterparts below the bridge(1).  As daylight concluded the work in the woods commenced.  Two of the four hunters, Garret and Dakota, were picked up and explained Chad’s success.  Both had seen deer but no shooters.   We were eager to meet the other two and chip-in to retrieve Chad’s buck from the woods and bring it to the buck pole.  It wasn’t long we were heading down the reclaimed logging trail where Chad and Mike were waiting.   Handshakes and ‘big knucks’ were traded…and then the stories. 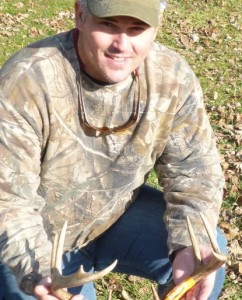 Chad told how the 50+ degree northern Michigan temperatures had him worried.  He said his research revealed deer activity increases as the temperatures decrease.  “I sat there listening to the song birds ‘til lunch time knowing what Gary said about buck activity during the mid-day.  My anticipation ran about as high as it could since this was a first visit to Michigan for me…let alone deer season”, said Chad.  It was worth the price of admission listening to him tell the story…especially, the imitations of the buck’s vocalizations as he came into “Chad’s zone”.  “I heard something coming that I knew was heavy footed.  It stopped real close to my ground blind but my window on that side was closed to scent control a bad wind that morning.   All of the sudden I heard some heavy grunting and breathing mixed in with foot stomps.  Then he stepped into view…a dandy buck!   He was so close I worried my movement would tip him off.  I waited until he walked a few more step

then he turned and walked…away from me!  I knew I had to make my move or that sumbitch was a gonner”.   Chad then began talking about how he has watched countless videos of people hunting and stopping their buck in its tracks by grunting themselves.   “I let him take a couple steps right into a shooting lane then I grunted.  I didn’t use any grunter I just did it with my own mouth.  He stopped like he just received an invite to fight, turned and looked back in my direction.  Thank God I was ready with my rifle!  I let him have it and he dropped.  I climbed out of the blind and noticed the buck wasn’t moving.  I set my rifle on the deer and grabbed my phone to get a picture.  There wasn’t any repositioning this big boy…what you see in the picture is what I first saw,” said Chad.

With the buck proudly hanging on the pole the evening’s air was filled with a story retold to a receptive crowd of tomorrow’s optimism.  The next morning three unfilled tags arrived for a hearty breakfast.  Each of them eager to reciprocate their luck so they headed out to their respective spots.  The scent intolerance of the U.P. whitetail was given mention just before their departure.  It was mid-morning when Chad’s appetite arrived for breakfast.  His admission of over-celebration the evening before didn’t stand in the way of asking, “So, what is there for me to do since I tagged out?”   I knew the southern hospitality in the “Swampster” would appreciate checking our trap line.   Born was the “Companion Trapper”.  As luck continued, for Chad, but not so much for a beaver, the U.P. experience continued to beam with charm. 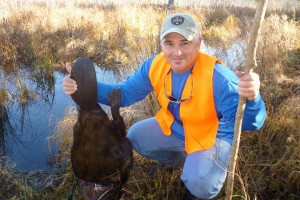 Day two concluded with Mike commandeering the back straps from the buck pole and onto the patio gas grill.  Mike’s style of preparing the evening meal was perfectly integrated with intermittent taste-testing.  It was during that time Mike explained that his boys, Dakota and Garret, ages 17 and 18 respectively, would continue to address me as Mr. Morgan despite my requests.  Then day three arrived in similar fashion…this time the boys had a mid-day appearance in camp for lunch and a quick nap.  Their hunting hiatus was met with my proverbial ‘shot across their bow’, reminding them most ‘shooter bucks’ show their presence at the same time.  That evening was a repeat hunting experience…no shots fired.  Garret quietly showed me a pic of a buck rub in front of his hunting spot.  Had it not been for the look on Garret’s face, I would not have immediately realized this was a brand new rub.  The rub happened during the lunch period that same day.  My earlier shot across the bow didn’t need a double-tap.  My comment: “That’s hunting”.

The final day arrived in similar fashion.  Mike and Dakota switched to new hunting spots both showing plenty of buck sign.  The day came and went without a phone text of good fortune.  Dakota told of a nice buck that snuck in and caught him moving before he could pull a good shot.  That evening the youngsters found their pillows early and “us ole’ folks” shared stories near the wood stove ‘til late.  It was evident friendships were born inside of a deer camp in Michigan’s U.P.  The next morning after breakfast their departure was met with snow flurries showing signs of accumulation.  I recall Garret saying, “this is the first time I’ve seen snow.”

Later that morning I reflected…that look on the Floridians’ faces when they learned that the ‘smoke houses’ were actually ice fishing shanties, my realization that Florida’s bass fishing was the real deal and Osceola turkeys hang out in both Mike’s and Chad’s back yards like song birds.

…you know what I’m thinking!

(1)Bay Archery (BayArchery.com) displays and sells all their scent elimination clothing in large, plastic sealed bags.  Thus, not just hanging on the rack absorbing all the odors while on display.   ELO believes it makes all the difference.