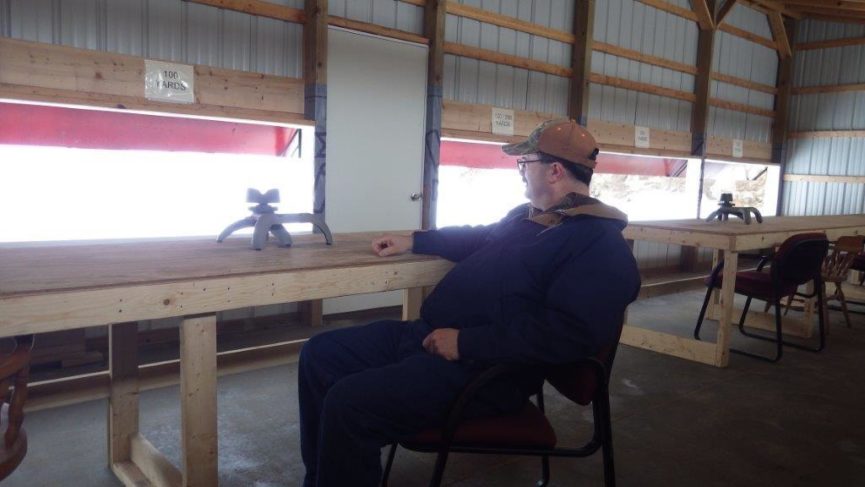 Shooting for fun or competitively (which is still a lot of fun) is truly an American pastime shared by a whole lot of people of all ages today. When folks have a shared interest, they often get together and form a group to organize and enhance matters, and in the case of firearms these groups become known as shooting clubs, or in my vernacular, gun clubs. One can only imagine how many gun clubs exist from coast to coast across America. I know my Thumb area of Michigan has quite a few, and in all three counties too.You don’t have to travel all that far to locate a local gun club, and I personally think that is a fantastic fact which speaks for itself.

One Thumb area gun club with an 85 year history is the Tuscola County Conservation Club (TCCC) of Caro. Entailing 40 acres surrounded by tall evergreen trees, it is located just across the Cass River south of town on a road aptly named “Gun Club Road”, and is just a short jog east of M-24. It is not hard to find, and to locals such as me, it is commonly referred to as being the “Caro Gun Club”.

It was originally formed in 1933 by a group of Caro businessmen who shared a common interest in shooting, which at that time mostly entailed the shotgun sports of trap and skeet. It must be remembered that during that era the ring-neck pheasant was a very popular local game bird, and in fact due to the popularity of pheasant hunting during its heyday, small game hunters far outnumbered deer hunters in Michigan. Times would change however, as they often do.

When pheasant numbers took a nosedive, so did the number of pheasant hunters, and deer hunting began to become more popular in leaps and bounds. In the 1960’s gun clubs, if they already didn’t have one, were getting requests to have a place to shoot rifles (as well as shotguns with slugs). Like many other gun clubs, the TCCC would create a rifle range, and as was common then, it would entail different yardages usually out to a maximum of 100 yards.

This didn’t underscore the importance of maintaining trap and skeet by any means, because busting clay birds with shotguns has never faltered in its popularity and remains to be the mainstay shooting pastime for most gun clubs. The rifle range simply added more diversity and convenience to gun club members and was a very common sense measure due to changing times.

I have long enjoyed shooting trap and skeet and thoroughly appreciate the camaraderie on the firing line that goes with it, and there is no better way to keep your “shooting eye” in tune for the hunting seasons. Trap and skeet would eventually have other related avenues developed known as “sporting clays”, which truly adds some spice to an already heady elixir. Then there would be other challenging shotgun shooting contests created.

It was about three decades ago that I participated in my first “Crazy Quail” shoot, which happened to be held at the TCCC. I was totally fascinated by the wide array of clay targets winging out or across at different angles, and it certainly wasn’t a place for a single-shot shotgun! And what was called a “rabbit” zinging along the ground and bouncing when you least expected it to bounce, was the fastest blooming “rabbit” I have ever shot at. Maintaining the proper lead ahead of the fast moving target was something that could be figured out (after the first few misses anyway), the unexpected bounces were what could throw you a left hook. I loved every bit of it, including the misses and a good dose of humility to boot!

I recently got an invitation from the TCCC President Doug Kline of Caro, to review the gun club’s various shooting ranges (of which there are several) and to check out some new additions. It is clear this group is keeping up with changing times and I was very impressed with the entire layout. It has two trap and two skeet ranges, as well as what they call their “Six Stage” range, which I must admit really caught my eye. Featuring 27 clay-bird throwers (including the legendary “rabbits”) I was picturing flashbacks of “Crazy Quail” that was shifted into overdrive. Needless to say, I knew I was going to have to eventually give the Six Stage a whirl.

Kline also showed me the various pistol and rifle shooting ranges, each neatly tucked into the woods, and surrounded by tall earthen berms, backed by concrete barriers. A pastime becoming popular these days is known as action shooting, of which there are many variations, and involves not simply just sitting at a bench and popping away at paper targets. One is known as the “three gun” shoot where the competitors use rifle, shotgun and pistol, and it often requires being on the move and addressing targets with all three types of firearms. Often used are durable steel-plate targets which spin around or fall over when hit, which certainly adds some animation, not to mention sound effects as well.

Another shooting range Kline showed me was simply called “the 270” because shooters can address targets setup in a 270 degree arc, firing from the windows of a plywood shooting shack which closely resembles a helicopter. Another shooting range is designed with handguns in mind, and with a growing number of citizens, both men and women, becoming involved with concealed carry this is an important offering of any gun club.

Kline then led me to a long building which was an enclosed shooting house, where shooters are protected from the elements while firing out a long, well situated window. This featured 100, 200 and 300 yard rifle ranges, from a stabile bench that can accommodate a number of shooters. The range itself is sided and backed by a tall berm that not only creates a safe environment, but also thwarts any wind which could affect shooting accuracy. The 300 yard capability is a new addition to the TCCC shooting ranges and certainly meets the demand where shooters want to reach out a ways further.

This particularly perked my interest because I’ve been looking for a place to shoot up to 300 yards, and entailing little to no wind interference. I have a number of rifles I wish to see how they perform and what loads they prefer to efficiently reach out a ways. One in particular is a vintage bolt-action 6.5 X 55 Swedish Mauser in full military fit. The engineers of a bygone era certainly knew how to put matters together, because the iron sights on this flat-shooting piece (featuring a shallow “v” rear and thin blade front sights) are right on the money to 100 yards (making this one of my favorite “coyote” rifles) and have never needed to be adjusted. However, the rear sight features a “ladder” adjustment for shooting quite a ways further out, and I’ve always wanted to give this a try. You might say I wish to try some long range shooting the way it was once done before optics became so popular.

Like all gun clubs in general, the TCCC places an emphasis on youth involvement and has programs in this regard (including Hunter Safety courses). The $50 a year dues includes the spouse and non-adult children (and any other kids you wish to bring), and this gun club clearly has a lot to offer. I originally went there to do just a review, but after reviewing everything, I automatically joined as a member.

For more information about the Tuscola County Conservation Club, go to www.tcccmi.com.