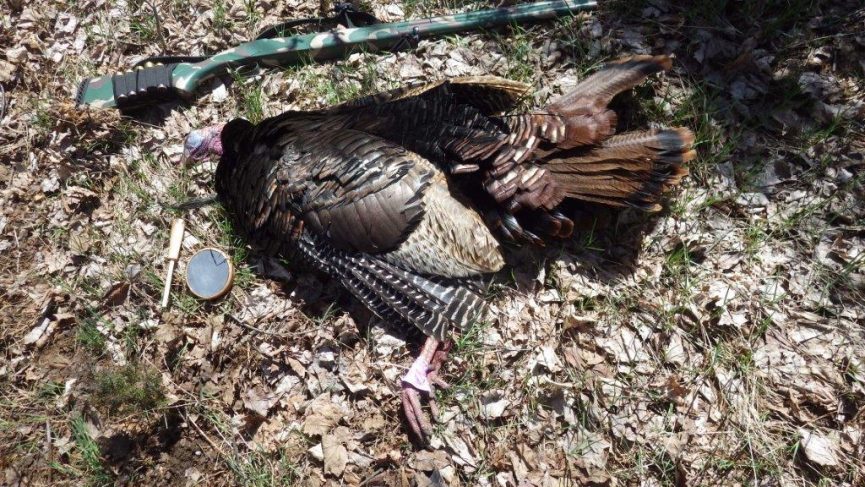 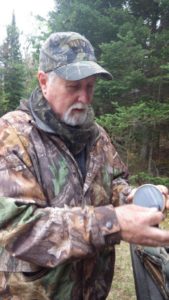 Atlanta, MI  hunting guide John Jones (left) prefers to use a Woodhaven conditioning stone to “sweeten up” his (Rod Benson Calls) Cherry Poppin’ slate call.  Time flies when you are having a good time because it sure doesn’t seem like I’ve been hunting springtime wild turkeys in Michigan for over 45 years. In the early days this all took place “up north” and there was a chancy lottery that had to be dealt with, and you could only hunt in the morning. I was quite fortunate on the draw for a spring turkey license (I always opted for the seasons that offered the best odds for getting drawn) and I was elated when the hunting hours were eventually extended to include the afternoon. If you were a keen observer while scouting during the down time back in the early days, great opportunities were possible as the day progressed.
What really made me happy was when wild turkeys were successfully planted in the Thumb during the mid- 1980’s, and having spring turkey hunting seasons in our area since the early 1990’s. There is something to be said about being able to hunt closer to home and it sure doesn’t hurt the local economy any either. I’ve run into turkey hunters in the Thumb who were from other parts of the state. The fact is, the Thumb offers excellent wild turkey hunting opportunities today, and that certainly works for me. 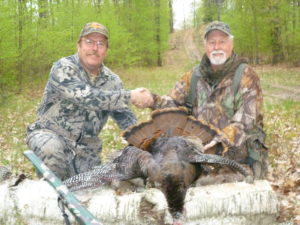 Gary Morgan in a joint effort with John Jones – a Tom Lounsbury gobbler!