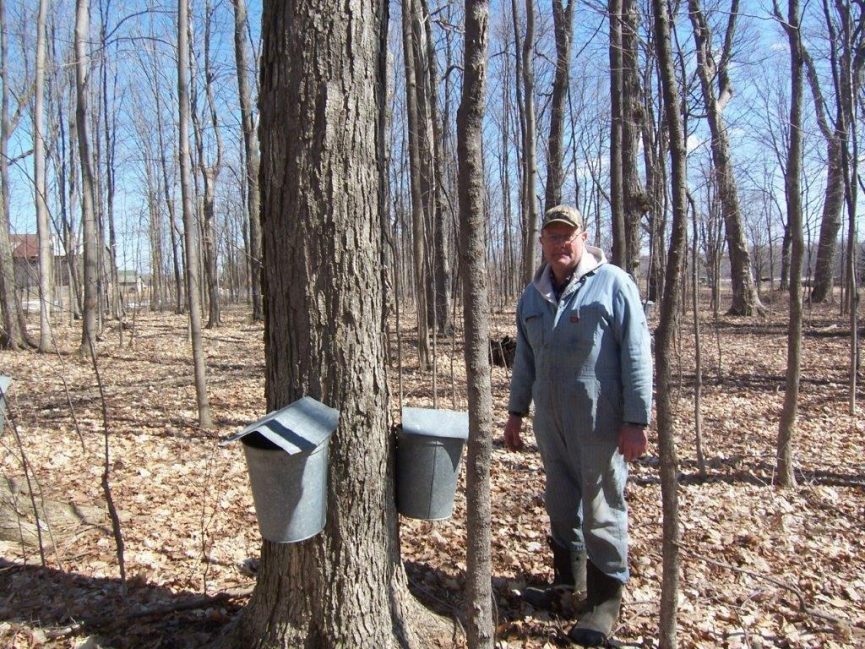 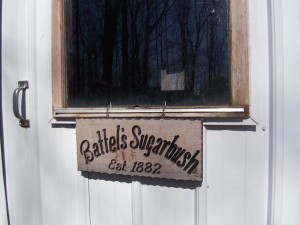 I always look forward to my annual spring pilgrimage to the Battel sugarbush located just a few miles northeast of Cass City (on Ritter Road – a couple miles west of M-53), to stock up on freshly made maple syrup, a very sweet flavor of spring I always yearn for. This usually occurs not long after the first day of spring, because the typical timeframe for gathering sap from tapped maple trees in the Thumb runs from March 1 to April 1. (I thoroughly enjoy the annual Battel Maple Syrup Open House the third Saturday of March each year).

Mark Battel is the 4th generation to own and operate the family maple syrup business that his great grandfather George Battel first started in 1882, just one year after the great forest fire of 1881 that swept through many areas of the Thumb. What is unique about the Battel “sugarbush” is that many of its large maple trees predate the 1881 forest fire (these old originals are referred to as “virgin timber”), because fate allowed them to survive when abruptly changing winds caused the raging inferno to slightly turn and pass by. Countless Thumb area sugar maple trees weren’t so fortunate (it swept through where my family farm is located).

From the Colonial period on, maple syrup and maple sugar were an important sweetener for many pioneering settlers in northeastern America, and often much more available and less expensive than the processed cane sugar and molasses that was being shipped in from the Caribbean. For many in wilderness situations, maple syrup/sugar was the only form of sweetener, a resource learned from Native Americans. Boiling sap each year at the onset of spring became a necessary part of life in those days, and it was a skill that was passed on from generation to generation.

Today processed sugar produced from both sugar cane and sugar beets are certainly more commonplace but for many of us real maple syrup remains a delicacy that offers a very distinct flavor from our part of the world. The first use to come to mind is on pancakes and waffles, but it does just as nicely on ice cream and popcorn, as well as an ingredient to many cooking recipes and in marinades for smoked meats. I even like to add it to a cup of coffee or tea.

I can readily remember working in a neighbor’s sugarbush when I was in high school. The first chore was selecting trees, with 10 inches in diameter at least being a requirement, and drilling shallow holes in them with a hand drill, and hammering in a hollow metal tap, on which hangs a bucket for holding sap. Depending upon the diameter of the tree, this could entail as many as three taps. Then the buckets were hung on to gather the steadily dripping sap. The metal sap buckets were special made with removable lids that kept out debris and precipitation.

Reaching the trees for tapping that year required wading through nearly waist deep snow. Fortunately this began to establish trails to the various trees through the snow that became more packed while gathering sap with a pair of 5-gallon buckets on a daily basis.

However, there were times the trails became slippery with ice, and later with mud. The already touchy footing was also thoroughly enhanced by tree roots, fallen limbs, ruts, rocks and holes. This was certainly an obstacle course, especially with a nearly full bucket in each hand, while you meandered your way back to the holding tank being towed through the woods by a tractor.

I can remember slipping and falling once with two full buckets spilling their entire contents all over me, soaking me to my skin. As watery as that clear sap appeared, it was still pretty sticky. Hard work kept me warm for the remainder of that afternoon, but I literally had to peel my sticky clothes off when I got home.

It was clearly strenuous work, but I thoroughly enjoyed it. There was a constant association to the woods in all kinds of unpredictable March weather, and you literally began to form a personal association to individual trees that each, you discovered, possessed their own unique character. Then there was the sun disappearing as you gathered the last of the sap for the day. A combination of wood smoke and steam from boiling sap escaping from the slotted roof of the sugar shack permeated the woods with a very unique and unforgettable aroma that gathered close to the ground as the temperature dropped and darkness enveloped the woods.

The pale yellow glow created by a hissing Coleman lantern shining out of the only steam-coated window on the sugar shack was always a beckoning beacon at the days end. When you opened the door you were greeted with a nearly suffocating heat that instantly enveloped you and quickly thawed out any frozen digits. The moist scent of boiling maple syrup was so heavy inside that you could almost taste it as well with each breath while the red glow of burning hardwood in the furnace combined with a densely foggy atmosphere to create an eerie flickering along the walls and ceiling.

The steam in the room swirled around you on its way up to the slanted roof slot to escape into an ink-black and star-studded sky to the accompanying music of bubbling, boiling syrup and the snap and crackle of a hot fire. Clearly there is no other atmosphere quite like it.

The best and most productive sap days entail freezing 25 degree nights and thawing 40 degree days. It takes 40 to 45 gallons of sap to make one gallon of maple syrup.

If my coworkers and I were lucky at days end and a fresh batch of syrup was near completion, the boss would drain off a partial cupful for each of us to sip and savor. It was clearly a distinct elixir of spring that energized a weary body. To this day I still on occasion warm up a mug of (real) maple syrup and sip and savor it, and fondly remember those unforgettable physically hard days and a close and constant association to Nature in the sugarbush.

Mark Battel removed a lot of physical labor to gathering sap in 2005 by installing tubing on 600 taps, operated by a Surge vacuum pump. The pump doesn’t actually suck the sap from the tree, but instead equalizes the pressure and allows the tree, which according to scientific theory already possesses its own pressure, to send the sap to the storage tank. Another 100 taps still require the lidded sap buckets. All the sap is sent to a large storage tank right next to the sugar shack, where it is transferred as needed during the boiling process.

When it comes to harvesting maple sap there are really good spring seasons and then there are not so good spring seasons according to the weather. No matter the weather, the Battel family (including the 5th and 6th generations) will be boiling sap and holding their annual Maple Syrup Open House on Saturday, March 19th from 10 am until 4 pm and it is open to the public. This gives folks an opportunity to see everything firsthand, and I know I’m taking my grandchildren for a visit because it makes a great outdoor outing for the entire family.

Making maple syrup and savoring its flavor is a definite part of the process in enjoying Nature’s wonderful seasonal bounty. It is very clearly the sweet flavor of spring.