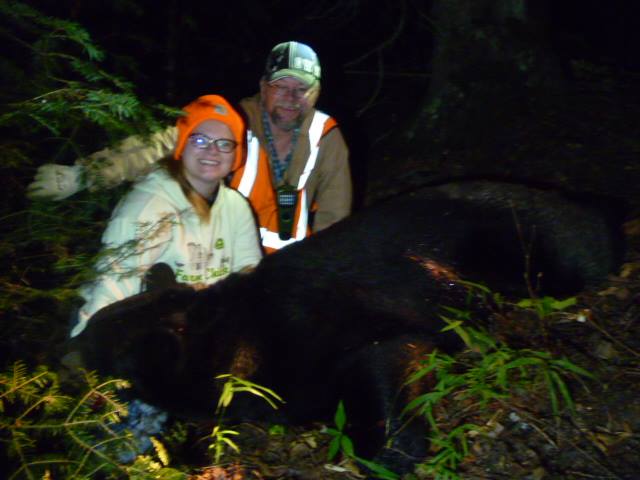 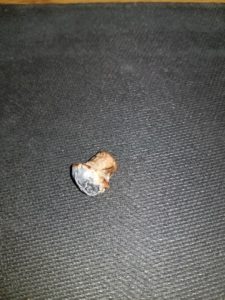 (left) Hornady slug found in fall of 2018 while baiting for bear…embedded into bear bait log.  Slug returned to Lynette.

Lynette Jackson would begin hunting at an early age with her father Gale Jackson of Caro. She would bag a spring turkey gobbler with a shotgun when she was 12 years old, and this would be followed over the next few years with bagging four whitetail bucks using her father’s scoped .50 caliber Remington “700” muzzleloader. Having heard her father talk about his bear hunting adventures, Gale knew this was a pastime she wanted to pursue, and began accumulating points each year to apply for a fall Michigan black bear license, including all through high school and even college.

In 2017 she had accumulated 9 points and she applied for the early season (starting September 10th) in the Upper Peninsula’s Newberry Bear Management Unit, and she succeeded in drawing a bear tag. She would look upon it as being a great father and daughter hunting adventure to share together.

When it comes to bear hunting over bait, I came to the conclusion a long time ago it is best to hire the services of reliable bear hunting guides, because they know the lay of the ground, where best to setup for bears, and have an ongoing baiting process which is important to bringing bears in for a shot. In this instance Gale Jackson contacted his friend Gary Morgan who owns and operates Wild Game Dynasty outfitting and guiding (for more information go to www.wildgamedynasty.com). I’ve personally used Morgan’s services for bear hunting and he offers a class act (including food and lodging), and specializes in hunting big bears in the National Forest in Mackinac County, just north of the Mackinac Bridge. 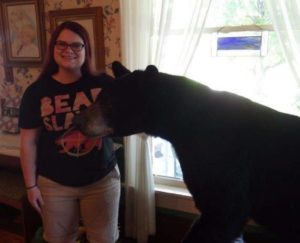 For this bear hunt, Lynette would use her father’s Remington muzzleloader stoked with a 300 grain Hornady hollow-point bullet backed by 100 grains of Pyrodex powder, a combination she had successfully used for deer and was fully familiar with. This is actually a no nonsense load which won’t tear into your shoulder with recoil, yet it will hit like a freight train.

Gary Morgan typically names his baited bear setups which may entail a ladder-stand or a pop-up ground blind that he usually doesn’t put in place until his hunter is ready to use it. Depending upon a client’s physical capabilities, some blinds can require a hike, because big bears are often not found near well beaten paths. In this instance Lynette and Gale had to wear knee-boots and hike almost a mile through some dense woods and a grassy marshland to reach the “Wolfy Blind”, which was a pop-up ground blind overlooking the bait placed under a pile of logs 57 yards downhill. Behind the bait was the sparkling hint of a creek, which they could hear coursing gently through the woods, and it was definitely a beautiful woodland setting to spend time in. 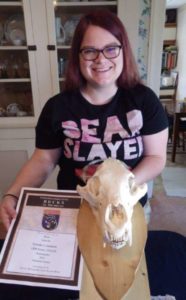 Of course bear hunting over bait can be like that, with patiently spending time in a woodland setting while waiting for a black bear to suddenly appear, as if by magic, which can be a spellbinding moment that automatically gets the adrenaline flowing. Usually there isn’t a sound involved at all because bears move on soft padded feet and their fur slides silently through the brush. What catches your eye is the dense and glossy black that wasn’t there a second ago, and then everything comes into focus. Needless to say folks, I’ve never found bear hunting over bait to be a boring pastime at all, and I do love that sense of anticipation it entails.

Bear hunting over bait is usually an afternoon activity, as black bears typically spend their days in cool shady places and don’t venture out until evening shadows are easing in, and they will feed throughout the night, and head back to cover before daylight. For this reason, I look upon this type of hunting as being quite relaxing, and you can even sleep in, as well as do some fishing before hunt time.

Lynette and Gale had scheduled a four day hunt, and the first three days, after venturing in around 1:00 pm each day, proved fruitless with the only wildlife seen being the occasional chipmunk. However, the walks back out after nightfall by flashlight can be an adventure in their own right, and they were thankful Gary Morgan had used “glow tags” on tree trunks to guide their way.

It was on the fourth day (September 13) with only an hour of daylight left, when Gale, who was seated on the left side of the blind, suddenly saw the black bear silently emerge from the brush and he whispered “bear” to Lynette who readied the muzzleloader on shooting sticks for a steady shot, as the bear eased up to the bait. Even though this was obviously a very big bear, Lynette would hold her fire for several minutes to assure the bear had no cubs in tow. Once it was determined they were looking at a big boar (male) Lynette took careful aim and fully appreciated the light gathering ability of a quality scope with evening steadily easing in. She made sure to slowly take the safety off to avoid a metallic “click” that could alert the bear.

The bear was slightly quartering away and had paused to stare directly at the blind when Lynette put the scope’s crosshairs just behind the bear’s left shoulder and touched the trigger, with the muzzleloader’s loud report shattering the stillness, and the typical smoke briefly obscuring matters. Gale managed to spot the bear bounding away just before it disappeared into the brush, and was able to determine its line of travel. Bears typically have a heavy layer of fat underneath thick fur, and do not necessarily leave a good blood trail. When mortally hit, they often let out a “death moan” just as they die, and sometimes they don’t. In this case, no death moan was heard.

In that particular neck of the woods, cell phones won’t work, but you can often text. Lynette texted Gary Morgan that she had just shot a bear, and he replied back that help was on the way. However, darkness quickly settled in as they waited for Morgan and his helpers to arrive. Because the nighttime temperature was quite warm, waiting until daylight would mean the bear could easily spoil, and the decision was made to track it down, and Lynette and her father were both certain it had been a good hit. I can state for a fact, looking for a just shot black bear by flashlight in the dark in heavy cover is a tad exciting, and your senses become super fine.

However through good teamwork, the dead bear, which had run less than 50 yards, was located in about 20 minutes, but then the work would begin because it was a very big (400 pound) bear. After field dressing the bear, it was placed on a special carrier which resembles a stretcher with a single large wheel in the middle. Nothing is harder to get out of the woods than a dead bear, especially a really big bear, and it would take five men five hours to do so.

Lynette Jackson’s big black bear would be a true trophy as it was later aged to be 7 years old and its skull would score 19 and 8/16 inches and be officially placed in the record book of Commemorative Bucks of Michigan. She would also be the only lady hunter to bag a record Michigan bear in 2017 with a muzzleloader. 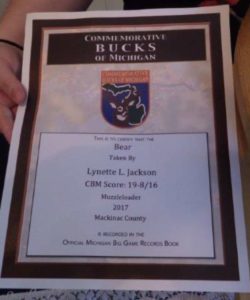 To say Lynette and her father Gale had a wonderful time shared on a great adventure is an understatement, and bear hunting is definitely in her blood now.

She is already looking forward to the next time.