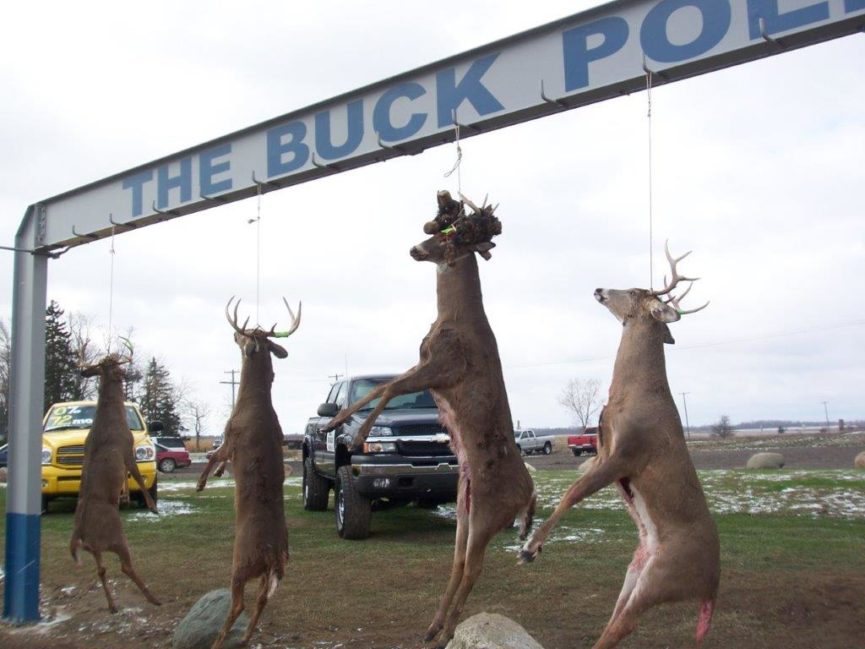 Humankind certainly has a way of changing the face of the world, especially in the name of progress, and Michigan is a prime example. When Europeans first made their appearance in the Great Lakes State, the southern Lower Peninsula featured more open areas, including prairies and bogs, which was ideal habitat for whitetail deer and elk. The northern Lower Peninsula and Upper Peninsula entailed a very dense, unending old growth forest which allowed very little sunlight to penetrate through. This was ideal habitat for woodland caribou and moose, and detrimental to whitetail deer, which were very few in number and could only be found in isolated pockets that provided just enough required habitat in order to survive.

The southern Lower Peninsula would become the first portion of Michigan to be developed by European settlers. Certain portions, of course, also contained old growth forest, but due to the continual progress of clearing land for agriculture and commercial timber interests, the face of the southern Lower Peninsula would completely change, and as time goes, almost as if overnight. During all of this, there was no regulated hunting, and by 1870 the elk (the now extinct Eastern subspecies) was completely eliminated, and whitetail deer were few and far between.

An effort through legislation in 1859 had been made in regards to deer hunting by establishing a 7 month season, but with no limit and obviously with little, if any, enforcement.

With timber opportunities becoming exhausted in southern Michigan, matters began to steadily extend north, and with the growing pains of a young nation requiring a steady supply of lumber, the railroad came readily into the picture to meet the need, and expanded its range into a once nearly inaccessible wilderness. With the steady clearing away of old growth forest, the once dense canopy was opened up and completely changed the habitat, which became unsuitable for moose and woodland caribou, but was just the cup of tea for the scant number of deer in that neck of the woods.

This is a prime example of the resilience of whitetail deer and relates to the saying – “if you make it, they will come”. The deer numbers began to explode in northern Michigan, and by 1880 there was an estimated one million deer. Deer would play an important role in the timber industry, because venison became a primary source of protein for lumber camps which could have employ up to 200 men. Professional hunters were hired to provide a steady supply of venison, which is a similar example of bison (and “Buffalo Bill” Cody) being used as a ready source of fresh meat on a regular basis for workers during the construction of railroads across the Great Plains.

In the early days of this country, including through the 19th Century, market hunting was considered as being an honorable profession, especially with what appeared to be an inexhaustible supply of wild game. Daniel Boone and Davy Crockett were definitely notable market hunters, not to mention Annie Oakley who, as a young girl, shot and sold game to support her destitute family. Market hunting was actually quite lucrative, especially for those who backed matters, including performing sale of wild game on an interstate level. They also possessed a lot of political pull in this country.

Railroads were essential to getting game meat to the market quickly, as well as allowing ready access to isolated areas well stocked with wild game, such as northern Michigan’s abundant deer herd. When it came to market hunting for deer, there were no laws or rules to go by, and any way to “get the mostest the fastest” was the feasible way to handle matters. Using dogs was a popular method, as well shining deer at night, and even traps of various types were used. Where possible, deer were driven into the water where waiting boats would intercept and kill swimming deer. Size and sex of the deer didn’t matter, and all that was usually taken for expedience and ease, were the hindquarters and back-straps. Some deer were killed just for their hides. In 1880 alone, an estimated 70,000 deer were killed in northern Michigan – 66,000 by market hunters (half of which, entailing an estimated 5 million pounds, was shipped out of state) and only 4,000 by sport hunters.

In 1875, the Michigan Sportsman Association (MSA) formed in Detroit to create a unified effort to prevent what they realized was a wanton destruction of the northern Michigan deer herd. They, however, met a stiff resistance from the highly influential market hunting lobby. Regulation steps did begin to take place when the deer season was shortened to 5 months in 1881, and when it became illegal to kill deer during summer, as well as kill swimming deer and the use of traps (which included pitfalls). One can only wonder what enforcement, if any, was used, and there was a futile attempt to restrict the sale of game meat out of state.

The first Michigan game warden was hired in 1887, and also when it became illegal to use dogs and lights. The beginning of deer management in the state began in 1895, with the deer season becoming November 1 – 25 and a 5 deer (any sex) limit. A hunting license was also required for the first time. In 1890, certain counties were closed to deer hunting, and this would eventually entail a third of the state by 1920. The deer limit was dropped to 3 in 1901, 2 in 1905, and to only one deer in 1914 (with an estimated 45,000 deer in the state). The best time for deer hunting was determined to be November 15 -30 in 1925, and it is a timeframe which remains popular and revered to this day.

The Lacey Act of 1900, which made it a Federal violation to ship game meat across state lines, finally put an end to market hunting. Deer numbers in northern Michigan were steadily declining, and in 1921 the “Buck only” law went into effect, which in turn created the “sacred doe” concept that still exists to this day (today, only about 40% of Michigan deer hunters purchase an antlerless license). The first Game Division was established in 1928, and by 1930 it was apparent that deer had responded quickly to the buck only law, and were becoming quite abundant.

During the late 1930’s, reinstatement of antlerless deer hunting was done in certain counties for the first time to keep rising deer numbers in check with the habitat. Due to the (sacred doe) attitude created by the 1921 buck only rule, having an antlerless harvest was met with a stiff resistance (which continues to this day). However, it has been proven that harvesting a certain portion of does is   the key to keeping a deer herd in proper balance with the habitat.

“Deer Camps”, as we recognize today, began in the 1930’s and really started to boom during the post-World War II era, which was further enhanced in the 1950’s by an Interstate Highway system. The “Big Mac” Bridge, which opened in 1959, was frosting on the cake for many deer hunters, and “going up north to deer camp” remains to be a popular tradition for many to this day.

In 1937, 2 counties were allowed to have an archery deer season, and it would become statewide in 1944. In 1948, southern Michigan counties, long closed to deer hunting, were finally opened up, and it was on that year’s opener that World War II Veteran, Mack Seney of Reese, shot the largest buck of Tuscola County on record. Southern Michigan would continue having an annual deer season, with a steadily expanding deer herd, which would really explode during the 1980’s, and keeping growing numbers in check remains to be a challenge. 1975 was when a statewide December muzzleloader deer season came into effect.

Agricultural-rich southern Michigan today, offers the best deer hunting opportunities in the state, and many deer hunters are now able to experience their passion closer to home.

However, with its colorful deer hunting history, Michigan certainly offers excellent deer hunting opportunities where ever you choose to hunt.