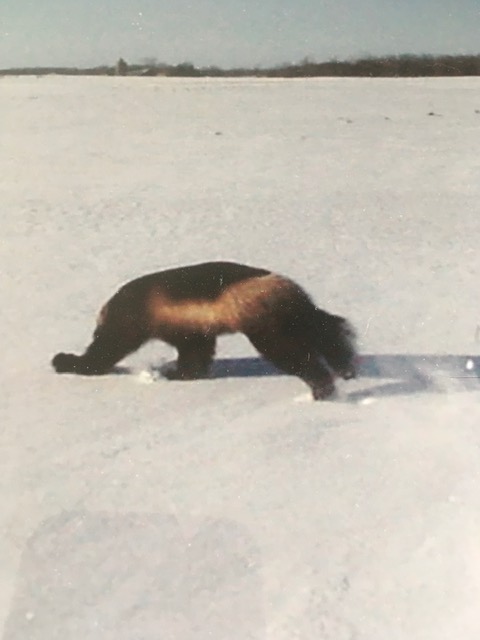 There are some theories of how Michigan became known as the “Wolverine State”, but the most plausible, in my opinion, relates to the “Great Toledo War” during 1835-36. This was regarding the boundary, called the “Toledo Strip”, entailing 468 square miles, between the State of Ohio and the Territory of Michigan, which was in the process of petitioning for statehood. Both were claiming the “strip”, and militias of both sides, were called out and even confronted each other on opposite banks of the Maumee River, near Toledo, although there fortunately was no blood loss. There was, however, a lot of jeering and heckling, including Ohioans calling the Michigan side “greedy wolverines” (which certainly wasn’t meant in a very nice way), and I think it was a handle that stuck.

Ohio would gain the Toledo Strip, and Michigan ended up with most of the Upper Peninsula as a tradeoff, when the official boundaries were drawn up. President Andrew Jackson, as well as Congress, had made it very clear, the quibbling between Ohio and Michigan was over, especially if Michigan wanted statehood. Michigan wasn’t happy, but under pressure, eventually relented and, although not known at the time, the Upper Peninsula would fortuitously turn out to be a great asset in the future.

There is no documentation whatsoever of Michigan ever having any wolverines. During the fur trade era, Michigan was a notable hub in the business, and numerous wolverine pelts were mentioned, but had been brought in by Canadian fur trappers/traders.

When Thumb Area coyote hunters turned their hounds loose in Huron County (just south of Bad Axe) on the morning of February 24, 2004, they had little idea that it would become a very notable and historical moment. While a coyote, and maybe even a fox were the quarry of the day, a primary purpose of the hunt was listening to the very unique chorus of hounds on a hot scent. It is an ancient, time-honored pastime deeply steeped in tradition.

In no time the hounds hit a hot scent trail meandering through a gentle fluff of freshly fallen snow, with their howls echoing through the Thumb countryside, on a chase that would last for six hours. Tracks of the animal being pursued by the dogs puzzled the hunters, as they belonged to an animal none of them could identify.

Soon, however, the strange animal was sighted, and the hunters guessed correctly that it was a wolverine they were viewing, of which a live sighting had never been documented before in Michigan. Years before, the wolverine had been dropped from the Michigan list of endangered species, because it was thought that none existed, or had ever existed, in the state.

The chase covered six sections, with several circles being done by the wolverine in each. Eventually, however, it decided to take a break and climbed a handy tree near Ubly, where it remained for the better part of an hour.

MDNR Wildlife Biologist Arnie Karr had received a call to the Cass City Field Office that a wolverine was treed in Huron County. Knowing the odds of this were as good as finding an alien from outer space, Karr set right out to discover what mystery creature this might be. His timing was quite fortuitous too, as shortly after Karr arrived, thanks to a helpful lift from a snowmobiler, the wolverine decided to make good its escape, allowing the seasoned wildlife biologist a good look and an opportunity to take photographs.

With credible and undeniable evidence that a wolverine had indeed been sighted in Huron County, MDNR officials placed it back on Michigan’s Endangered Species List first thing the following morning on February 25, 2004. The discovery of the wolverine in the Thumb also hit the national news media, both in newspapers and television.

The animal’s appearance is truly a mystery which may never be solved. The wolverine is known as an animal of the far north and associated to wilderness settings, as it has little to no tolerance towards human encroachment. One theory is that it may have come to the Thumb from Canada by way of a drifting ice flow on Lake Huron, which certainly marks an incredible journey, if that is the case. Another theory is that it had escaped or been released from captivity, which in my opinion, is the most plausible (you’d be surprised what animals, even exotics, can be purchased on the black market – a Canada lynx being captured in northern Sanilac County in March, 2019, is another prime “mystery” example).

Ernest Thompson Seton had this to say about the wolverine:

“Picture a weasel – and most of us can do that, for we have met that little demon of destruction, that small atom of insensate courage, that symbol of slaughter, sleeplessness, and tireless, incredible activity – picture that scrap of demonic fury, multiply that mite some fifty times, and you have the likeness of a wolverine.”

Despite that demonic description, the Thumb’s wolverine, however, proved to be a very secretive animal that never bothered any humans or property, and was rarely, if ever, seen. DNA collected from hair samples would determine that it was a female.

On a personal level, I liked the idea of the wolverine surviving wild in the Thumb, no matter how she got here. When I traveled places elsewhere, and folks discovered that I was from the Thumb, most would ask about our local wolverine. I guess you might say she added a little extra spice and flavor to the mix.

The Thumb’s wolverine decided to settle in the Minden City State Game Area not long after her hound encounter. In the Thumb, this area offered a little more elbowroom from a wolverine’s perspective, and plenty of heavy cover for the necessary privacy. I also had little doubt the wolverine would have plenty to eat with road-killed deer being readily at hand. Although a wolverine can and will hunt other animals for food, it doesn’t hesitate to scavenge for an easier meal.

The Minden City State Game Area is the only place in the Thumb where you can find snowshoe hares, and it is one of my favorite hunting spots. I was there rabbit/hare hunting not long after the wolverine sighting, when I discovered the wolverine’s distinct tracks in the snow, and I must admit it was truly a thrilling moment. The tracks were relatively fresh, but I never saw her, and to my knowledge, it is the closest that I ever got to her. I have a feeling if she had been close enough to sense my presence, she would have immediately put a lot of distance between us.

The folks who really deserve a lot of credit in regards to the Thumb’s wolverine, are the hound hunters that originally discovered her. In reality, the wolverine wasn’t a protected animal in Michigan that day, but the hound hunters knew they had made a very rare and unusual discovery, and took the proper and ethical steps to let the world know.

On Saturday, March 13, 2010, a pair of hikers discovered the wolverine’s body in the Minden City State Game Area. I feel the discovery was quite fortunate in the fact that, otherwise, the Thumb’s (and Michigan’s) only wolverine could have easily vanished without a trace. In this manner, there was definitely some closure to an amazing six-year saga.

An autopsy would determine the wolverine was 9 years old, and in wolverine years in the wild, the female was obviously getting up there. Her cause of death was literally old age heart failure (degenerative cardiomyopathy). Her full-sized mount can be seen on display in the Visitors Center at the Bay City State Park, which I believe is truly befitting to Michigan’s only documented wolverine. She certainly made her “official” stamp during her relatively short stay in Michigan’s Thumb.

For more information about wolverines, check out www.wolverinefoundation.org>.