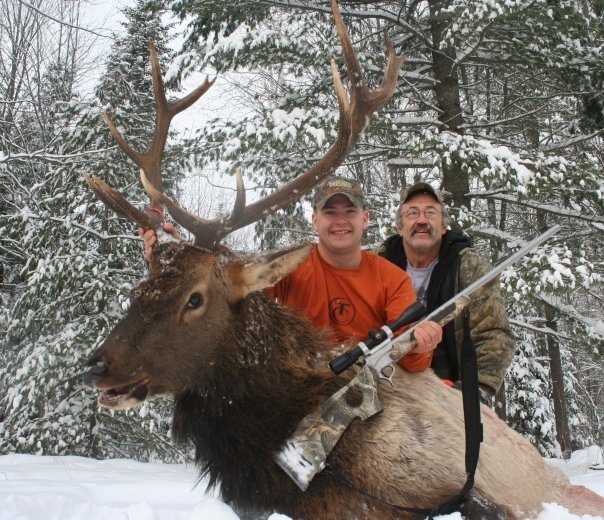 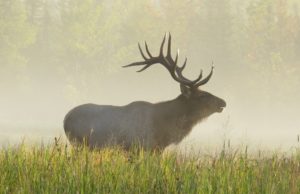 This year marks the 102nd anniversary of elk returning to Michigan. This all began with 7 Rocky Mountain elk (from Yellowstone National Park) being released in 1918 near Wolverine in northern Michigan. Elk are native to Michigan, but they had become extinct around 1875 due to unregulated hunting and a major loss of habitat.

The subspecies found here was known as the eastern elk and was once abundantly found from the East Coast all the way to the Mississippi River. It was also bigger than its Rocky Mountain cousin, with mature bulls being 60 inches tall at the shoulder and weighing half a ton, and carrying antlers 6 feet long. These were the elk found in Michigan’s Thumb area, and prior to the Civil War, hunters would use the Cass River as a travel corridor through the wilderness from Saginaw to the elk hunting hotspot known as “The Forks” of the Cass, near present day Cass City (and why this location is named Elkland Township).

In those early days, southern Michigan with its bogs and more open areas had more suitable elk (and deer) habitat, and northern Michigan, due to its immense, dense virgin forests, was originally woodland caribou and moose territory. The logging era would eventually change matters, and in a very dramatic fashion. The moose and woodland caribou would disappear, and whitetail deer numbers, previously scant in the virgin, mature forest would explode in the new growth timber and other browse that then had better access to sunlight.

The last known eastern elk was shot in Pennsylvania in 1877, and this distinct subspecies was declared extinct in 1880. By the early 1900’s, the Rocky Mountain elk population in and near Yellowstone National Park was becoming too numerous for the habitat and an offer was sent out to states to give away live elk for transplanting. Pennsylvania was the first to accept in 1913, as did other states which included Michigan in 1918.

Those 7 elk would eventually reach around 1500 animals by the early 1960’s and limited hunts were held in 1964 and 1965. However, the elk numbers would take a crash due to habitat issues and poaching with only around 200 Michigan wild elk surviving by 1975. During this time a focus was put on elk as being a viable natural resource for Michigan, which would include elk viewing that remains quite popular today. A great boon to Michigan’s elk herd was the oil exploration in the Pigeon River region and the resulting hydrocarbon development which provided necessary funds for habitat improvement. Elk poaching was also curtailed, and it is very unwise to poach a Michigan elk today.

Elk numbers would recover and limited hunting would resume in 1984 to keep elk numbers in check with the habitat as well as with agricultural issues. The hunters for the special elk hunts are selected by a random drawing, actually a lottery, if you will, for Michigan residents only. Typically there are about 31,000 applicants trying for 100 to 200 elk tags, with the tag numbers varying from year to year. But the truth is, that it is one of the cheapest elk hunts you could ever go on (the elk license cost is $100) and it has a typical success rate of 80 percent. I can remember, for example, there were 200 licenses issued in 2018, of which 140 were for antlerless and 60 for any elk – which generally translates to all of those usually being bulls, and there are some amazing antlered specimens (there are now well over 1000 elk in 105,000 acres of the northeastern Lower Peninsula).

Now some folks might assume Michigan elk hunting is similar to taking a short hike into a cow pasture to shoot a domestic bovine, but that is hardly the case in reality. Elk which seem to be easily viewed from afar, are an entirely different critter when you go to hunt them, and especially so when they realize hunting season has arrived. I’ve interviewed quite a number of Michigan elk hunters, even some who were unsuccessful, and this is no easy hunt at all to perform. For a fact, I would hire a local guide to hunt this area because of his/her knowledge of the area which includes a mixing of private and public lands as well as the elk concentrations at a given time. There is also the extreme feat of getting a downed, field dressed elk out of the woods, which can be as much as 5 times (or more) bigger than your average whitetail deer. So it pays to get to know some “handy” folks well before the hunt, because it definitely isn’t a one-person job.

I’ve been applying for a Michigan elk license each year since the beginning, and after more than 3 decades of trying, I was actually getting used to rejection, and had even learned to expect it. My only hope was to eventually get lucky on the elk drawing, while I could still put one foot in front of the other. The truth of the matter is, that I might never get drawn for a Michigan elk tag in my lifetime.

I went online on July 7 to check and see if I had been successful in either the 2020 black bear or elk draw, and with the assumption I had enough points to become successful for the second bear season in the Newberry Bear Management Unit, and I was automatically assuming I would be “unsuccessful” for elk. Much to my dismay, I was unsuccessful in the bear draw, despite the points, and such does happen, and I do appreciate the process does entail a case of chance. I was also unsuccessful in the Pure Michigan Hunt, no surprise there. Then I clicked down to the elk, while expecting the usual.

Well, folks, I can’t even begin to describe my feelings right at that moment, other than complete and utter shock when I read “SUCCESSFUL” (in capital letters) for any elk, bull or antlerless. Yep, I read it over and over again, and even had my wife Ginny read it also, just to be sure I wasn’t imagining things, especially after over 3 decades of rejection!

However, it didn’t clarify as to when my hunt would take place, early (starting in September, or the late (in December). I originally thought I could harvest a bull, the way it was written online, but wasn’t sure. I eventually was able to contact the MDNR for clarification. It appears, due to a glitch in a new system (which only related to what you applied for and not what you actually got), there was a bit of confusion for successful applicants, myself included. It turns out I have an “antlerless only” tag for the early season, which sure works for me. A plump cow represents some great eating, and nothing beats elk meat, trust me.

After years of rejection, any Michigan elk was now on my agenda, and in fact this year was the first time I applied for “Any Elk”, because before I had applied for “Bull Only”. Getting “long in the tooth” made me realize that I might never get drawn in my lifetime, which was a real possibility. Yep, folks, I was getting desperate! I have no complaints at all, and truthfully feel quite blessed to actually take part in a Michigan elk hunt.

The first thing on the agenda was to contact my good friend John Jones of Atlanta, who is a hunting guide in that area, for black bear and elk. I had told him awhile back, that if I ever got drawn for a Michigan elk hunt, he’d be the first person I’d call. Having been a local elk and bear hunting guide for almost 3 decades, John Jones really knows the ground and its critters well, which of course, is an extremely important asset at the get go.

My next step is to be sure I am physically fit, because elk hunting can be a “run and gun” affair, and having hunted wild turkeys (also by run and gun) in the Pigeon River region, I can state for a fact there can be lot of up and down hills to traverse. I will also need to be fully acquainted with my selected rifle and ammo. Shots might be close up, or a bit out there. In any event, elk are very tough critters (I rank them as probably being the toughest big game animal on our Continent) which require precise shot placement with a proper bullet, and even so, they can often show no reaction to a good hit. There is quite literally no room for mistakes on this hunt.

I do look upon all of this as being a very special hunt in my lifetime and am truly anticipating and looking forward to it. It is good to know, elk hunting in Michigan is alive and well.