By:  Tom Lounsbury.  The Michigan Outdoor Writers Association (MOWA) is the oldest organization of its kind in the country. Formed in 1944 at Blaney Park in the Upper Peninsula, it celebrated its 75th Anniversary recently at Crystal Mountain Resort located near Thompsonville in Northwestern Michigan, where MOWA members were offered a wide variety of outdoor options during a couple days of activities of their choosing which are readily available in the area. Fishing, hiking, biking and canoeing/kayaking, you name it, can be found there. 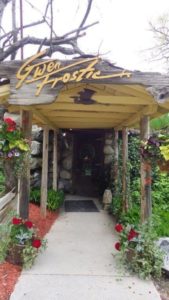 I’ll never forget joining MOWA 35 years ago and how “star struck” I was when I had just arrived and entered a room during the cocktail hour, and saw notable outdoor journalists that I had been an avid fan of for years. The first person to walk up and warmly greet me was Mort Neff who had hosted the weekly Michigan Outdoors TV show I had enjoyed watching since I was a kid. Although retired and in his 80’s, he was spry as ever and made a point of sitting with my wife Ginny and me during dinner. He certainly was a fine gentleman and it was an honor to get to know him, as well as the other notable “old guys” of MOWA, who are mostly gone now and I dearly miss them. I was the new kid on the block back then, but I realize that I am now considered as being one of the old guys of MOWA.

Needless to say, I have dearly enjoyed the MOWA meetings each year that have introduced me to the wonderful outdoor attractions and the folks involved with them all over our great state. The first thing on the activity agenda for Ginny and me at this recent MOWA get together was visiting and doing a tour of the Jordan River National Fish Hatchery in Elmira, which isn’t far from Gaylord. It was a bit of a haul to get there from Thompsonville, but it was a very scenic drive we much enjoyed and well worth the effort.

The Jordan River National Fish Hatchery was established in 1963 and its location was selected due to 2 springs which combined, send over 5000 gallons of fresh water a minute downhill which the hatchery utilizes in a mostly energy free, very cost efficient manner. It is the only fish hatchery of its kind in the country and its main focus is dedicated to stocking lake trout in the Great Lakes, providing 3 million yearling lake trout annually. Also of interest to me is this fish hatchery is providing lake herring (also known as Cisco) to restock Saginaw Bay. Herring was once a popular fish species in Saginaw Bay, but overharvest and pollution had decimated its numbers by the 1950’s. Cleaner water today as well as other helpful factors is hopefully going to see herring once again thriving in Saginaw Bay. 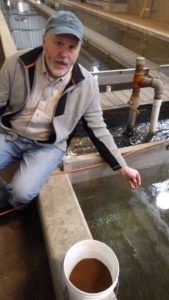 Our tour guide was Hatchery Manager Roger Gordon who did a thorough job in a very enlightening manner by explaining the entire process of the facility from stem to stern. “Eyed” lake trout eggs are received from broodstock facilities beginning in November and incubation occurs during December and into January and fry begin to hatch in January and February. Yearling lake trout are fin clipped and/or tagged starting in February, with stocking them in the Great Lakes beginning in mid April.

I enjoyed viewing the herring fry which were described by Gordon as being a very fragile fish to deal with in a hatchery. He showed how if they are panicked in any way, they will faint and belly-up, but usually recover in a short while. Yearling herring are actually stocked in Lake Huron just above Saginaw Bay to allow them to adapt and grow a bit before they instinctively move into the Bay. To release the small herring yearlings directly into Saginaw Bay would create a very high mortality rate due to the many walleyes found there today going on a feeding frenzy. For more information, go to www.fws.gov/midwest/jordonriver . 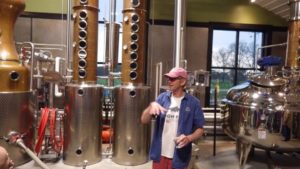 That evening found MOWA members dining not far from Crystal Mountain at the Iron Fish Distillery in Thompsonville. This is a family run business that actually takes place on a working farm, using grains grown there (as well as from other Northern Michigan producers) to make their various artisan spirits. The grain mash from this facility is then used to feed their bison, the meat from which ends up in their restaurant. One of the family owners, Richard Anderson, gave us a nice tour from the copper stills to the warehouse where filled wooden kegs are stored for the aging process. It is definitely a well run and very efficient system producing vodka, gin, rum, whiskey and specialty liquors.  This is quite an amazing fact when you realize this is a relatively new distillery which came about when 3 brother-in-laws went to Scotland together to tour distilleries, and the sudden idea of developing their own distillery back Michigan became a reality.

It was during the MOWA dinner at the Iron Fish Distillery that fisheries scientist Howard A. Tanner was inducted into the Michigan Outdoor Hall of Fame, for his successful efforts in establishing Pacific salmon in the Great Lakes. He tells it all in his just published book titled “Something Spectacular – My Great Lakes Salmon Story”, which is a great read. (For more information, go to MSUPRESS.ORG). 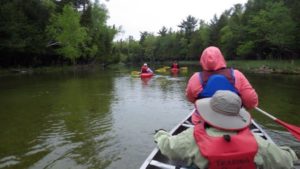 The next morning found Ginny and I paddling a canoe down the Lower Platte River, with MOWA member Carol Swinehart hitching a ride with us while seated in the middle. Along with us in kayaks was award winning outdoor photographer Tom Buchkoe and his wife Barbara, and we had all rented our watercraft from the Trading Post in Honor (www.honortradingpost.com). I had learned a long time ago that when paddling rivers around the state that I go through a reputable canoe/kayak livery, which are practically found on most rivers in Michigan. This eliminates hauling matters around and removes the logistics of putting in and getting out. If you do haul your own canoe/kayak, the liveries will still assist in getting you in and out for a small fee.

In this case, we drove our vehicles to the Sleeping Dunes Park on the shore of Lake Michigan, parked them there, and road in the Trading Post van towing a kayak/canoe trailer back to the launch site. In this manner we could have a relaxing paddle with our vehicles waiting at the end. The Lower Platte River features a relatively gentle current as it winds through a beautiful forest, and I do regret not having fishing tackle along, because steelhead and brown trout were in evidence during our entire trip. This also is a very popular river for tubing during the summer, which the Trading Post also provides, and I do believe I’m going to give it a whirl sometime as I’ve never gone tubing before.

Top on Ginny’s list was our visiting the Gwen Frostic Studio which is located on a nature preserve near Benzonia. The late Gwen Frostic was a world recognized artist who was attuned to the spirit and simplicity of nature, which she captured in her own unique way and her work remains extremely popular to this day. I wasn’t sure what to expect at the studio which is also a museum filled with Gwen Frostic’s artwork and history. Well, folks, I was a bit mesmerized and enjoyed it all. I’ll go back for another visit without hesitation.

All too soon our visit to Crystal Mountain Resort during MOWA’s 75th Anniversary came to a close. That part of Northwestern Michigan has a distinct allure to it that will no doubt have Ginny and I returning to sample more of its wide variety of offerings.