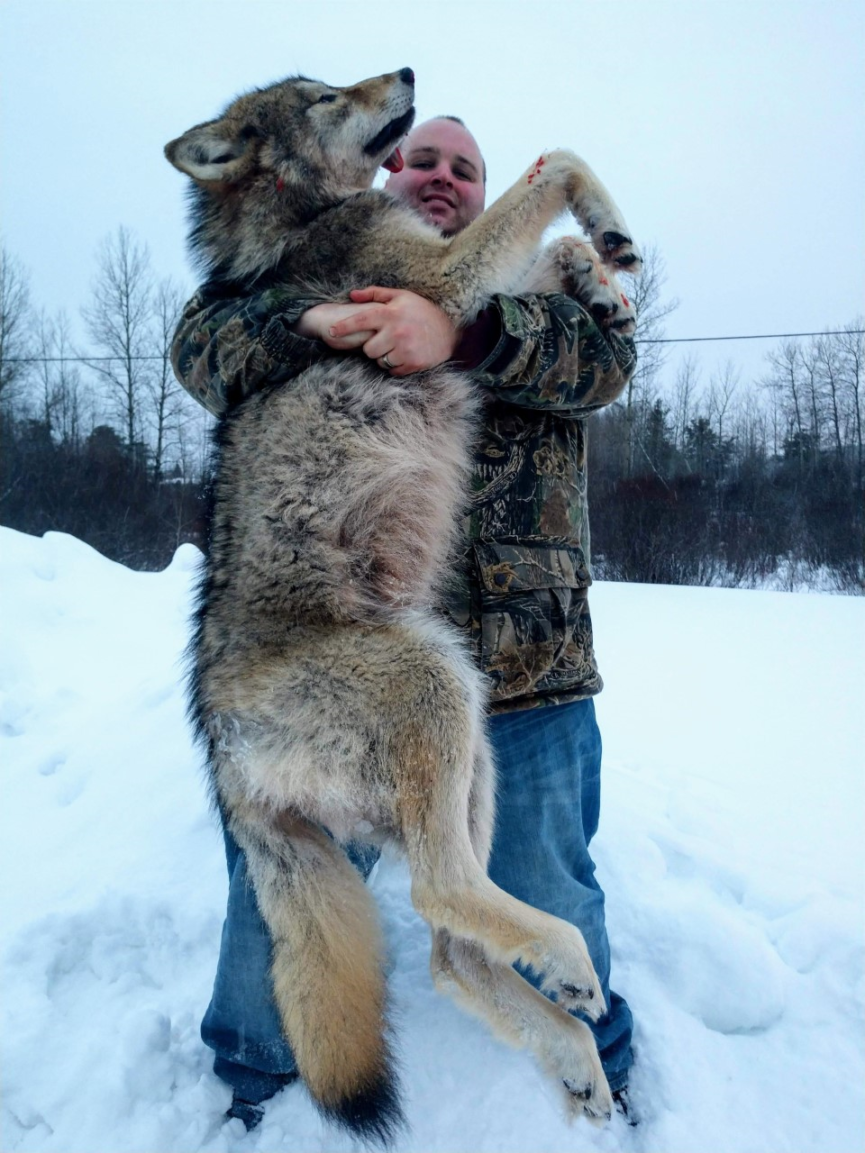 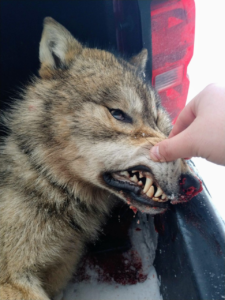 Not many people can say that they have seen a wolf in person while in the wild and many more people have not been lucky enough to have a chance to harvest a wolf.  Well last year in January of 2019, I was lucky enough to get an opportunity to go on my first wolf hunt. Where can you wolf hunt? Well obviously for the time being, my home state of Michigan is not an option, so Ontario is the closest, next best option for a chance at a big wolf.  I have been to Ontario a few different times for hunting and fishing, but this was my first experience in dead winter on a hunting expedition. White River, Ontario is a wonderful little town about 5 hours passed Sault Ste. Marie. I first learned about White River when I went on a spring bear hunt and fell in loved with the town and the area.  I was up in camp with Mike Avery while he was bear hunting as well and we got to talking about his wolf hunt that he went on a few years’ prior in White River. After hearing the story firsthand, I was hooked and immediately knew that this was an experience I wanted to go on for myself.

Mike gave me the contact for Pete Jones, the outfitter for wolf hunting in White River, Ontario.  Pete works a job at the mines in Ontario full time, so he only does about 6 wolf hunts a winter but after I gave him a call, he had room for one more in 2019 which I booked with him for the opportunity.  I have a flexible job where I can take my work with me and move stuff around to get the time if need be on a quick turnaround. So, Pete told me that he would watch the weather and check his cameras for when the opportunity looked best, he would give me a call.  Pete has year around bait stations that are around White River. Most of his bait he uses is Moose mostly from the highway/roadkill that get hit through out the year. He keeps these bait stations running year round so the wolves know that there will always be food there so when it comes time for the deep winter, they rely on this to help them through winter.  The weather and moon phase play big factors for wolf movement in the area, so I was on standby for Pete to give me the green light.

Saturday January 19th, Pete took a fresh moose carcass out to one of his bait sites that was just hit by a semi.  He checked the trail camera and there was a big black wolf on camera that morning before he arrived.  He called me and sent me the picture while explaining if the wolf was on camera the next day, I should try my best to get there asap.  Sure enough, the next morning on Sunday, within 20 mins of when the wolf came on Saturday, the black wolf was back. This was during daylight, right at the bait where it would be a perfect 110-yard shot from the blind.  So, after Pete sent me the pics on Sunday, I planned to leave Monday at first light for my first wolf hunt.

I left at 5 a.m. while checking the weather in White River to see that the current temperature was -40 degrees!  Not Celsius, but Fahrenheit. Legit -40 degrees.

Even with that temperature, it did not slow me down at all with driving right to White River with so much excitement and anticipation for what will come the next few days.  I arrived at White River around 2 p.m. with the weather being just a couple degrees below 0, so definitely a lot better than -40! I purchased my wolf tag on the way up there and was able to make it to my blind at 3 p.m. I was taken directly to my blind which was an easy 150-yard walk from the truck.  Even though the snow was about 2-3 feet deep, Pete had a trail packed down from driving a snowmobile right to the blind so while walking, I did not sink in the snow at all. It made the walk so much easier than it could have been. Pete has all his blinds at the bait stations fully insulated with propane heaters at each blind.  So even though it was rough temps and cold sits, sitting in the blind was super comfortable with an office chair and the propane heater running.

First afternoon did not produce any wolves seen which was not to surprising.  Pete instructed that all day sits are the best choice if possible because there is no rhyme or reason for what time of day the wolves decide to get up and hit the bait stations.  I left my parked truck little before 7 a.m. to walk to my blind. Carrying my lunch, gear, extra warm clothes just in case and my buddies 6.5 Creedmoor that I borrowed for my first wolf hunt.  I was using 140 grain Berger Bullets made by HSM while equipped with a Leupold VX6 4 24×52 scope on rifle. My buddy built this gun and he built a beautiful one that I was lucky enough to use for the hunt.  I have a few deer rifles that could have worked but this 6.5 Creedmoor was so nice, and I asked if I could use for the hunt. He obviously let me borrow it and my goal was to take a big wolf with it! While walking to my blind, about 30 yards before the blind, I hear my first howl.  I will say one thing, once you hear a wolf howl in the wild for your first time…there is no denying it is a wolf compared to a coyote. They are night and day difference. As I sit there listening/admiring the howl off in the distance, I hear another, then another. Luckily, they weren’t that close, but when said and done I heard what I think was 5 different howls from different directions.  I was ready to jump in blind and close the door behind me!

Daylight comes fast and before I know it, I have 50 plus ravens on the moose carcass to start my day.  One thing the locals and Pete said is that the wolves use ravens as a security blanket. They will not come into the bait unless there are ravens on the site.  45 minutes or so after daylight I am looking out my window at a ridge that I am sitting on watching the opening where the bait is, and I catch movement to the left in the brush past the bait.  I grab my bino’s and before I know it a wolf is jogging through the brush on an angle away from the bait. I watch in awe saying to myself, “oh my gosh, that’s a wolf”. Before I can even get my gun out the window the wolf is out of sight into the thick brush.  I can’t believe that just happened! 45 minutes into my first full day hunt. So, I sit anxiously for the wolf to come back, but the animal does not. 3 hours later around 1030 a.m. I see something behind pine trees that are 60-80 yards behind the bait. It’s a wolf!  This is a smart wolf. The wolf stays behind pine trees surveying the moose carcass and the surrounding area. I have the gun out the window ready and waiting for the wolf to come in. The wolf moves side to side within 20-30 yards of the pines but does not give me a clear site.  This looks like a big wolf, bigger than my first wolf I saw that morning but being it was 160-180 yards from my blind, I was waiting for it to come to the bait. After about 10 mins of the wolf circling and looking around, the wolf walks back the way it came and does not come in.

I sit replaying what just happened in my head and I am okay with it.  I was able to experience a wolf surveying the area, being cautious and smart while I was trying to get a clear shot.  I did not but this was already my 2nd wolf I had seen, and it was not even noon yet!  I was more than happy with that. I sit back and enjoy my comfy seat in the box blind that is heated until 2 p.m. when out of no where a wolf comes running in from my left only about 80 yards from my blind.  I jumped out of my seat to grab my gun and while doing so the wolf stops about 10 yards from bait looking around. The wolf is completely broadside and within 5 seconds I have the gun out the window with the safety off.  I take one last look at the wolf and know this is an animal I want to take! I put the crosshairs right behind the shoulder and squeeze the trigger. The wolf jumps and bites back at her shoulder then runs off. Within 6-8 steps the wolf went about 40 yards and was already in the brush out of site.  I could not believe what happened. I could not believe how fast and how far she made it in just a few steps. I check my phone and have 1 bar shockingly. Very surprising to have any service up there. I called Pete to let him know I have a wolf down and within 20 minutes, his Dad is coming up to my blind to help me recover my wolf. 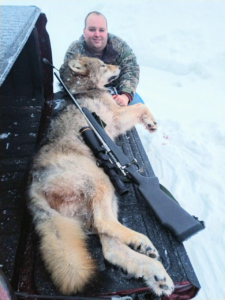 We make the walk down to the bait and find where the wolf was standing about 10 yards before the moose carcass.  We have snow above our kneecaps while walking which made it so hard to walk each step to recover my wolf. We follow her tracks she left and find her about 80 yards from where I shot her.  Pete’s dad brought a sled with him that we threw her on to slide on top of the snow and we begin our walk back to the truck. I take my wolf back to the hotel in town which is about a 10-minute drive where I meet Pete after he made it out of work.  We take some pictures and I tell my story. The wolf ended up being a female and weighing around 85 lbs. That is a good size, little above average wolf for Ontario. In Canada you must get what’s called a CITES permit in order to transfer your trophy.  It is basically getting a tag that’s almost like an export/import tag on your trophy so you can take it out of the country and to wherever your going. Pete gives me all my information I need and where to go for the CITES permit, so on Wednesday am, I head home with a wolf in my truck!  I stop at the border to declare my wolf and get praise on both sides of the border from people who were amazed by my trophy. I take my wolf to my good friend who is a taxidermist to help me cape out the wolf and I decide to do a full body mount. I received my mount back in December of 2019 which turned out perfect.  She had a perfect coat, big long body that I wanted to show her off for as long as I live. I did a howling pose for my mount because I know in my gut, she was one of the wolves I heard that morning howling on my way to the blind. This was truly a hunt of a lifetime and I highly suggest for you to experience it yourself if you can get the chance soon.  Wolf hunting in Ontario, in January, in negative 0 temperatures over a moose carcass…. you can’t get much better than that!