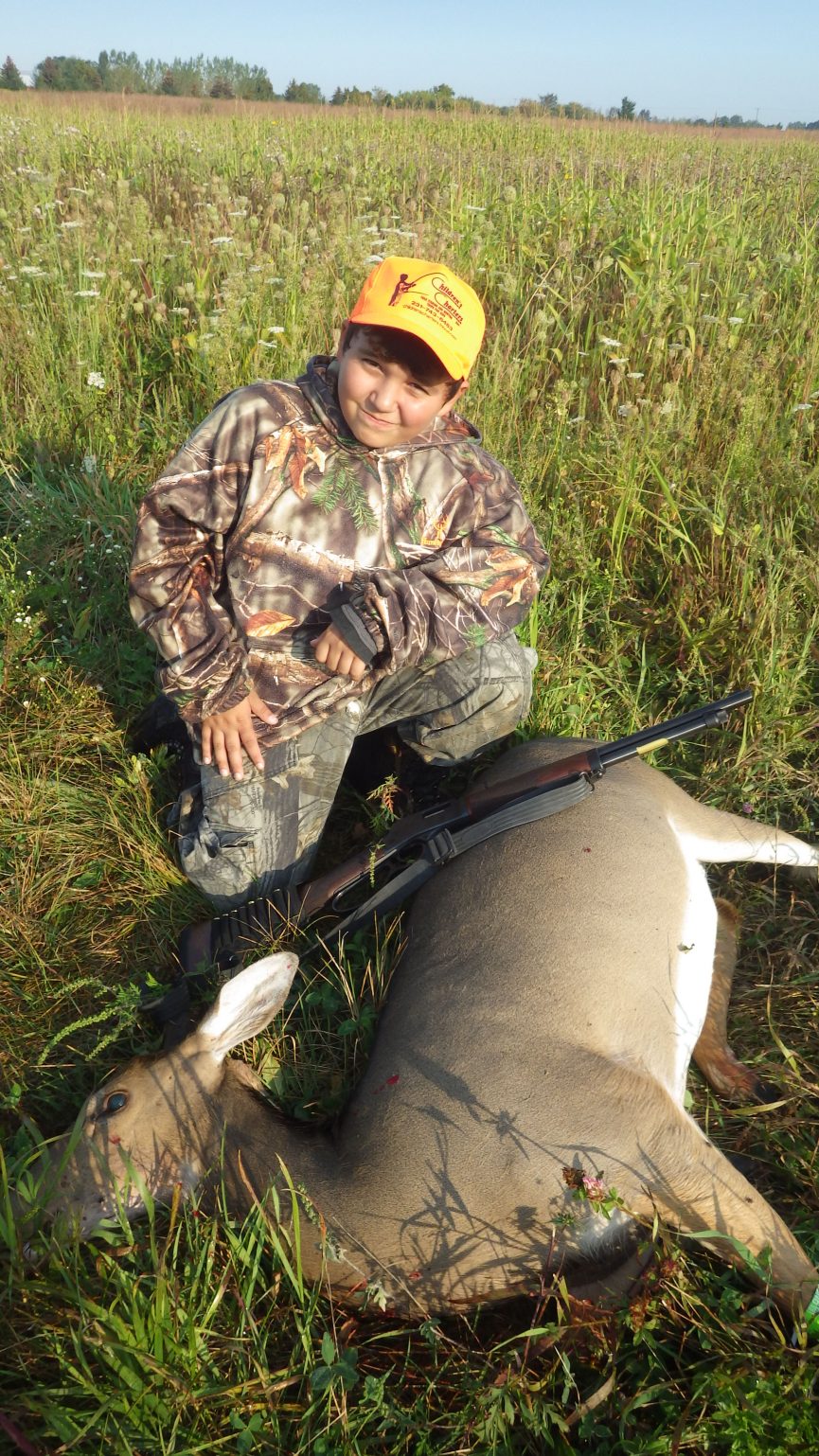 Probably one of the most daunting tasks for the MDNR, is to get deer hunters to harvest a doe. The last time I checked, only 40% of Michigan deer hunters ever purchase an “antlerless” deer tag, and when you check out the data of the overall annual deer harvest, antlered deer always way outnumber antlerless deer.  It is readily apparent that decades of a hunting tradition passed down through generations of Michigan deer hunters, that a female deer is the “sacred doe” of the forest, and therefore never, ever to be shot, making killing a doe a literal taboo in the deer woods.

This deeply seated attitude relates to Michigan creating the “Bucks Only” law in 1921. In the early 20th Century, it was readily apparent that the whitetail deer herd in Michigan was quickly dwindling. There were efforts made in the early 1900’s  to put a bag limit on the number of deer being taken, which previously had been quite liberal, but until 1921, the general attitude of deer hunters was “brown its down”, and shooting any deer was never looked down upon.

The whitetail deer is quite resilient, not to mention adaptable, and by the late 1930’s, state conservation officials realized the “Bucks Only” law was working quite effectively, and it was readily apparent that a number of antlerless deer, preferably does, needed to be harvested in order to keep deer numbers in check with the available habitat. However, by this time, the “Sacred Doe” concept had already set deep roots with generations of Michigan deer hunters, and it is an attitude which still remains to this day. The issuing of antlerless deer licenses over the years was usually met with a lot of opposition.

I will never forget when the DNR decided to issue antlerless deer licenses for the Thumb area in 1970, which literally stirred the pot amongst the local deer hunters. The various sportsmen’s clubs encouraged everyone to apply for an antlerless permit, with the intent of destroying any that would be received in order to prevent them from being used. There would then be some ritualized “doe tag” burning parties which were highly publicized in the local newspapers. The general consensus with those who supported burning tags, was that a true deer hunter would never consider killing a doe.

As it turned out, I was a recipient of one of those 1970 antlerless tags, and I was happy to have it. I also didn’t agree with the obvious hysteria taking place with a majority of local deer hunters, and I looked upon that doe tag as an obvious bonus. And yep, folks, I tagged a plump, farm-fed doe which was very delicious! I also consider myself to be a dyed-in-the-wool, true deer hunter, and am none too concerned about what others might think. I have been bagging and tagging does ever since, and my three sons grew up to do the same, in fact, the first deer each bagged, was a doe. In truth, a plump doe definitely makes the best venison, and my family eats a lot of venison each year, so does are always a prime target for us. Seeing a doe or two hanging in our family “deer tree” is always a common sight during deer season.

I truly appreciate both the early and late antlerless deer seasons offered now in Michigan, along with ample “doe tags”, which allows me to stock up the family larder. I’ve frequently heard the complaint from some deer hunters that Michigan today, has too many back to back deer seasons, which doesn’t allow whitetails a chance to calm down, and thus be easier to hunt. Well, folks, whitetails are definitely wary and wily critters pretty much all the time, as being a “prey” animal, it is their nature. However, hunting pressure of any sort puts deer on even more of an edge, as should be expected. Matters really don’t become apparent until November 15th rolls around, when a record amount of deer hunters hit the woods at the same time, and deer from that point on, know the gig is up. When this occurs, I’ve learned to hunt harder and smarter, and employ different hunting techniques, instead of just sitting static in one favorite spot and hoping a deer sashays in. I personally appreciate and enjoy all the deer seasons offered in Michigan today.

I can remember the first early antlerless deer season which occurred in mid-September, 2008, when I was an avid participant, and have enjoyed being one ever since. I thoroughly appreciate the mild weather and the unique challenge of what I call “trophy doe hunting”, because bagging a mature doe isn’t always a slam-dunk affair. A mature doe has had a pretty much fulltime job looking out for her offspring, and is typically an ever watchful and suspicious sort. I know when I’ve tried to stalk into range of a buck that I have spotted during the rut, if a doe is with him, the challenge of closing-in increases exponentially.

The recent early antlerless season opening morning offered a beautiful sunrise, and what happens to me often when “doe only” hunting, everything I saw had antlers! Then the heat picked up and the deer action abruptly stopped. That evening found me seated on a comfortable camp chair tucked slightly into tall prairie grass, with my rifle propped up on a tri-pod shooting stick. I like to read the wind while moving around and never use a particular stand twice in the same day, and working on the ground allows me a lot of versatility in where to hunt without worrying about accessing a particular hunting stand. I typically try to blend in with the natural cover, with the wind in my face, and using a deer call to make “social” deer bleats on occasion doesn’t hurt any.

Not long after I was in position, rain came straight down out of an evening sky that didn’t look like rain should be falling out of it, but I found it refreshing and it soon stopped. I was watching where two deer trails intersected, allowing me a narrow shooting lane and I kept vigil, because matters could happen quite quickly. That is when a big spider ran across the right lens of my glasses and stopped on the end of my nose, and I don’t like spiders! I instinctively swatted it away, and my shooting sticks fell off to the side, and that is when I saw motion at the intersection, which was the head of a large doe poking out of the tall prairie grass and staring directly at me. She slowly stepped forward, exposing her shoulder, and I slowly eased my rifle up.

For that particular hunt, I was using my .44 Magnum T/C Carbine topped with a red dot sight, and as soon as the dot hit the shoulder, I touched the trigger, and the doe whirled back into the cover. This was an awkward offhand shot from a seated position and I wasn’t sure at all if I had connected, so I waited 15 minutes before checking for blood. Well, folks, it turned out to be a complete miss! Been there and done that before, and highly doubt it will be the last time!

The following morning was rainy and there was little deer action, as apparently the deer were down for a break after some nighttime activity. That evening found me at another location on the ground in a camp chair tucked against the base of a spruce tree. I was situated at the edge of a farm lane, and since I might be offered a longer shot, I had my scoped Mossberg rifle in .450 Bushmaster resting on the tri-pod shooting sticks. Darkness was easing in, with the early antlerless season soon coming to a close, when several deer suddenly materialized into the farm lane. They had actually been bedded in the prairie grass not far from me.

A large doe started walking directly at me, offering me a slightly quartering frontal shot at less than 40 yards. Understanding a deer’s anatomy pays dividends here, because frontal shots can be tricky affairs. I placed the crosshairs at the base of the neck, just to the left of the doe’s shoulder, anticipating the bullet’s path would exit just behind the last rib on the right side, which it did.

When I touched the trigger, the doe reared up on her hind legs and fell over backwards, with all four feet sticking up in the air, and never twitched. I would later discover the bullet had destroyed the heart and lungs. The .450 Bushmaster is sure one heck of a deer cartridge!

With the temperature at a balmy 75 degrees, I needed to tag and get the doe as quickly as possible to the cooler of a meat processor. This is when I enlisted my wife, Ginny, to go online to register my kill per the DNR’s new mandatory requirement. Being very old school, I’m no computer whiz by any means, nor do I carry a “smart phone”. I was certain I would mess something up, but Ginny went right though matters, and claimed it was quite easy.

All I can say now, folks, is that I am ready and waiting for the archery deer season to start, because I sure do love all of Michigan’s deer seasons!