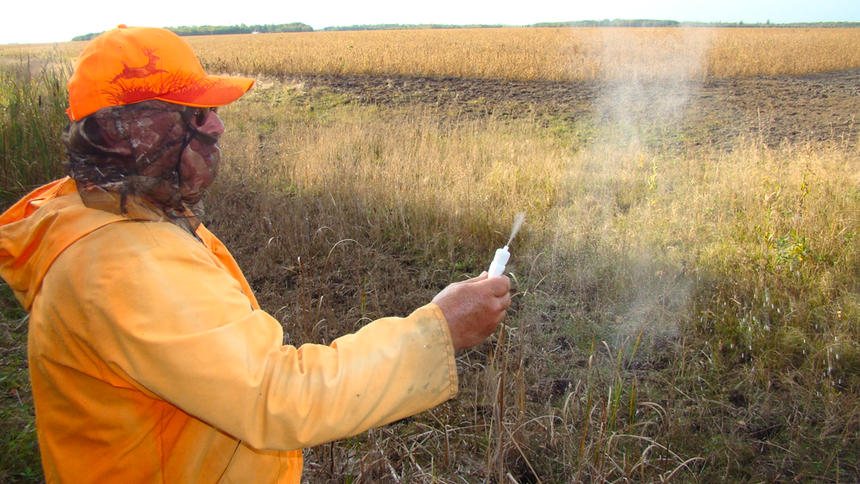 Probably the most overlooked sense of humans as predators is the sense of smell. Yet we move through a world filled with odors, many of which can even jog the memory of past events. The odor of freshly baked pumpkin pie and roasted turkey for instance puts me in mind of Thanksgiving every time. The combined odor of Hoppe’s gun solvent and freshly brewed coffee reminds me of deer camp.

Military snipers are a key example of tuning in all their senses, including that of smell, to locate their opponents. When in the field, snipers avoid using scented soaps, body lotions, and deodorants that could give their position away. It is something that works for hunting deer as well. Although deer don’t use soaps and lotions, they do emit an odor, especially during the rut. I discovered this odor many years ago when I was a state meat inspector and ventured into the cooler of a meat processing facility that was jam-packed with whitetail bucks taken during the mid-November firearms season, a key timeframe for the whitetail rut. The musky odor, although very distinct in that cooler, it wasn’t unpleasant at all, and I branded it into my olfactory memory bank.

When still-hunting for deer, I always use the wind to my favor not only to avoid detection by the deer, but also in order to pick up a hint of their odor (female deer emit their unique odor as well that is only slightly different from the bucks). The human nose certainly doesn’t possess the truly acute scenting capabilities of a deer, but I’ve learned from personal experience that when I pick up a whiff of a rutting buck on the wind, it has just been in the near vicinity, or is still there, and generally pretty close. This has helped me bag my share of deer, or helped others to bag theirs.

An example of this is the first buck my son Joshua bagged at age 14 (he’s a lawyer now, so this was awhile ago). He and I were approaching a woodlot with the wind in our favor, and we were quietly working our way through chest high weeds when I picked up the sudden and strong odor of a rutting buck. Josh was directly behind me when I stopped abruptly and held my arm in the position signaling for him to freeze. I then used hand signals to let Joshua know that I smelled a buck and motioned for him to move quietly ahead to my right, and be at the ready with his shotgun. Joshua banked right and took about three careful steps when the buck leaped up from its bed in the weeds only 15 yards away, and Joshua fired, dropping the fork-horn on the spot.

Joshua would forever more remember the tangible scent of a rutting buck. I had previously described it to him, but it is one of those odors that no doubt will require a “hands on” experience to get a complete grasp of it.

Just a few seasons later I had Joshua move to a position on a fencerow while I circled around and worked my way through some tall CRP grass cover in which I had discovered plenty of buck sign while pheasant hunting a couple of weeks earlier. I would have continued on past a bedded buck had not the quartering crosswind brought his scent to me. The odor was sudden and intense, and I abruptly turned back to my left and did a slow, stop and go figure-8 through the chest-high grass. That was more than the buck could cope with and he suddenly exploded up and headed full tilt toward my son. Joshua shot the large 8-pointer when it passed by at 5 yards and it went only another 20 yards before dropping dead.

Over the years I have taught all three of my sons how to identify the distinct odor of a rutting buck (actually I’ve noticed bucks begin to emit a stronger odor when they rub the velvet off their antlers and go into the pre-rut phase), and this was done through actual experiences shared in the field. They all have learned to go on full alert when their noses tell them that a buck is in the near vicinity.

While the odor can be discerned at anytime during the rut, I have found damp weather tends to enhance it, at least for my nose anyway (and it is a reason why you see deer licking their nostrils when suspicious to help scent matters better). I know my adrenaline kicks in just as quickly as a visual of the buck, when I pick up the scent.

One hunting technique I often employ when I detect the distinct musky odor of a buck is to hold tight and use doe bleats and/or buck grunts with a call to lure the buck into view for a possible shot. The odds are more times than not on the side of the deer if you try to stalk in on him without knowing his exact location, so if possible I get the deer to move to me or wait him out. Sometimes it works, sometimes it doesn’t, but it is a sheer thrill whichever way it goes.

Today there are all kinds of gadgets and gizmos to help hunters bag their deer. Some certainly work, and others are in my mind a bit questionable. However I think they are all fine if they give a hunter using them confidence, which in turn can often be the key to success.

Covering up or blocking the human scent in order to fool the deer’s nose is often a highly popular item. Personally I don’t wear “scent-proof” clothing and I have a devout respect for a whitetail’s nose. I’m old school in that I believe in hunting the wind, and I personally like the challenge of doing so, even if I complain at times (this year, quite frequently so) about switching wind directions when I’m in the middle of things. Such is a natural part of this pastime I dearly enjoy, and anxiously wait for each year.

By the same token I have friends that are very experienced (and successful) deer hunters who swear by using the scent-proof suits and/or scent blocking sprays. It is something that clearly works for them and I’m certainly not going to debate their successful moments afield. It just isn’t my cup a tea, and to do it correctly requires more dedicated effort and expense than I’m willing to put forth on each outing.

However, like the snipers, I don’t use my favorite aftershave or scented soap and deodorant during deer season either (yes I do bathe, but I use unscented soap including H.S. unscented shampoo and unscented antiperspirant). It never hurts to have an edge, if possible.

One scent I use and have seen work is that made from urine collected from actual female deer “in estrous”. There seems to be some debate as to the pheromone content of such lures, but I’ve actually witnessed bucks reacting positively to them. It is one of those items that in my opinion, doesn’t hurt to try, and I will use it according to the timeframe of the rut. For instance, I won’t use rut-related deer calls either, until near the Halloween timeframe, when bucks are clearly going out of pre-rut and into the rut phase and feeling a bit frisky. I use deer-urine scents as a lure suspended from a tree branch and wafted into the air a set direction according the wind, and I have also created a scent trail by dragging a deer-urine soaked rag behind me on a cord, and have seen it work with bucks clearly following it. When using deer scents in this manner, I sometimes employ a deer decoy as well.

Just like the deer uses its nose to scent out possible danger and other facts of life, I’ll also be using my nose to possibly alert me to presence of my quarry. Maybe it will, maybe it won’t. For a fact I don’t rule out my sense of smell in aiding me on occasions.

It is a relationship between prey and predator that has been going on since the beginning of time.