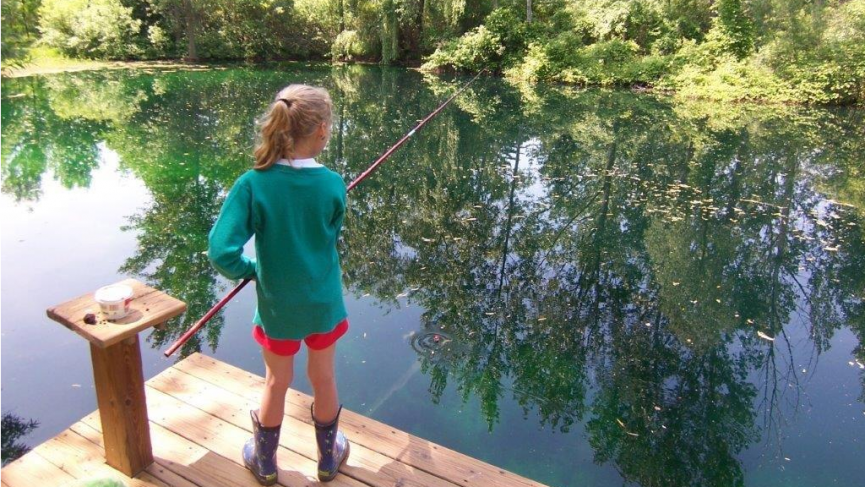 “The ever dependable cane pole” – By Tom Lounsbury

Primitive humans probably first began fishing with spears and nets. Somewhere along the way, someone figured out a convenient way to catch fish, especially in deeper waters, was to use a baited hook and line. This was in the form of hand lining (just plain hanging on the line with bare hands – a method actually still used today). No doubt it was learned that attaching the line to a tree limb hanging out over the water took a better, shock absorbing beating than bare hands. When an inquisitive soul figured out detaching the branch from the tree allowed for more diversity when casting the baited hook and line for even more effective fishing opportunities, the first fishing pole was born and the evolution of the fishing tackle we know today began. The fly rod of today got its start in merry old England as a slender rod whittled from a wood called “green heart” and using horsehair fishing line and no reel – reels would come much later.

There is something to be said about using a simple stick and string for fishing, because there is truly no fuss or muss entailed to the whole affair. Being from the baby boomer generation, my first fishing experiences were with long bamboo fishing poles (that everyone referred to as cane poles) that we kept stored in a special spot in the tool shed. Actually a lot of folks used bamboo poles back then and these weren’t the jointed poles that come apart in sections, but rather a single long piece of bamboo that had to be strapped on top or alongside of the car in order to reach the fishing spot.

Those long, bamboo “cane poles” were effective fishing tools too, allowing for accurate placement of the baited hook (the bait was usually worms we dug up in our humus rich barnyard). Generally we used red and white stick bobbers (probably a collector’s item today) as well, and the addition of this weight made for more control for accurate casting and that lengthy and slender bamboo allowed for acute sensitivity in feeling a fish was nibbling its way on the hook. That springy bamboo can take quite a beating as well with a fighting fish, and landing the fish is as simple as lifting the pole’s tip straight up in a steady manner. Actually it is just a very simple case of geometry.

When I started to go fishing alone by pedaling my bicycle from our farm to the nearby Cass River, those long bamboo poles had to be left behind. My method here was to take along a set length of fishing line wrapped around an old wooden sewing thread spool and when I got to the river, I would cut off a switch of sandbar willow that grows prevalent along the riverbank, trim off the branches with my handy pocketknife, and attach the fishing line to the slender tip of this and I was ready to go. Selecting the green willow (dry willow can become too brittle and will break easily) switch was an instinctive matter as to what worked for me, and it was a great system for wade-fishing and working near tight and brushy fishing holes. Actually it is a fishing method used for eons and I felt a distinct kinship to Huckleberry Finn and Tom Sawyer.

Then a friend came fishing with me and he had one of those new-fangled rod and reels, and I was mesmerized by the casting out and reeling in (which he did more of than catching fish), and I knew I had to save my money and get me one. Admittedly, from then on for a while I got away from the simple stick and string fishing concept. Then my three sons came along and with a farm pond in our backyard, summertime fishing is a way of life here. Not wanting to deal with the typical line snarls (aka “bird nests”) in lines and reels (I could easily remember my first experiences with my first rod and reel, and I was older than them) I opted right away to start them out with cane poles.

The local hardware just happened to have a bunch of bamboo poles of various sizes, and I was soon able to tailor equip the kids, and not wanting to have them feeling left out while I used a rod and reel, I got a “cane pole” for myself as well. You might say taking my sons fishing in this old style manner made me come around full circle. No doubt nostalgia played a role while I instructed them on how to do it, but I was soon reintroduced into how dependable and utterly relaxing fishing with a cane pole can be. I haven’t backed away from it since.

As fate would have it not long after my sons got into fishing, I discovered my favorite cane pole of all cane poles at a local garage sale, and for only a couple bucks. It is a 3-sectioned affair that when put together is in the neighborhood of 12 feet long, and unlike the cane-poles of my youth, is an easy matter to transport to and from fishing spots. It is also, despite its length, well balanced from its hefty butt to its slender, but strong tip. Although I mention often of my fishing adventures on the Cass River using a fly rod or ultra light rod and reel while wading or from a canoe, admittedly more times than not, you just might see me using this cane pole. Its sheer simplicity causes an already relaxing pastime to become even more laid back. On top of that, it is also very effective in catching fish in such a brush-lined river environment. Presenting bait or even artificial lures can be performed with a very unique dexterity, including small, open pockets in a myriad of lily pads.

My personal way of rigging a cane-pole is basically straightforward and like the tackle in general, quite simple. I use heavy (20-30 lb test) Dacron line as the main line attached to the tip of the cane pole, and cut off at the same length as the cane pole. On the end I have a swivel-snap for attaching hooks on monofilament leaders (or even a wire leader if I know a pike might be lurking about in the lily pads). My end result is casting a line out that is just slightly longer than the already lengthy cane pole, which I have found to be more than adequate and very manageable for near shore, off a dock, or river fishing. I’m certainly not looking to fish into deep and murky depths, but instead I pick my ground, so to speak, for employing this timeless system. (Extra line can be wound around near the tip of the cane-pole, but I personally feel this affects the ultimate sensitivity in feeling fish working the bait).

Generally I look upon using a cane pole as a live bait option, but I have successfully used artificial bait such as spoons and bass poppers. Minnows work well (especially if I’m fishing from a canoe), but more often than not I use dependable worms as they are much easier to deal with, especially when wading.

My grand daughter McKenna is an avid fisherperson who dearly loves to use cane poles because they are simple to use, and readily catch fish. I can remember the hot summer day I watched her slowly walking along the bank of our farm pond with her cane-pole extended out over the water, and much to my amazement she hooked and landed a 19 inch large mouth bass. According to her, she was “shore trolling”.

Bless small children. I had to try that particular technique myself because it obviously works.