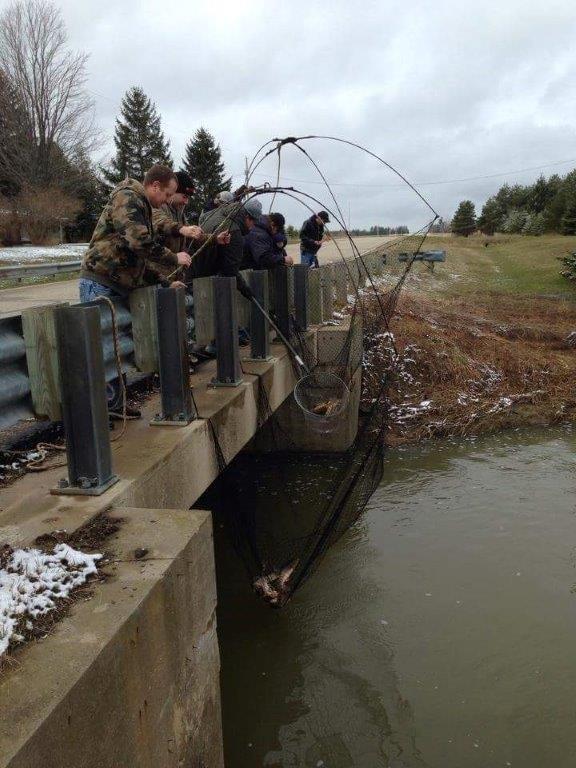 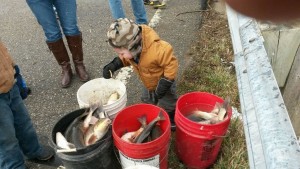 The various sucker fish species in Michigan get a bit of a bum rap from some folks who consider them to be a trash fish on the order of carp, which is a very incorrect attitude to have. Suckers get their name from their fleshy lipped mouths located on the underside of their heads and they are for a fact, bottom feeders. However, they are what I call “clean bottom feeders” in that they feed only on aquatic insects, crustaceans, snails, worms and in some cases, algae too.

Suckers have also been accused of eating the spawn of other game fish species and competing with them in the environment (like carp actually do) which isn’t the case at all. Suckers have nicely coexisted with the various game fish species for eons and are in fact an important prey species for northern pike and muskellunge. Certain sucker species also spend most of their time out in the deep water of the Great Lakes and only venture in and up various drainages, rivers and streams to spawn in the spring, which in turn creates a very unique recreational fishery for Michigan sportsfolks. Spring sucker fishing, in its various forms, is a great cure for spring fever, and the flesh from spring-run suckers is absolutely firm and very succulent.

Suckers provide great eating whether they are deep fried, smoked, canned or pickled. When it comes to eating suckers, they are indeed quite a boney fish, and when I have simply fried up the filets, picking out multiple bones while dining is a normal part of the process. However, I will always remember being invited to a fish-fry at the Sebewaing Sportsmen’s Club some years back and the fish being deep fried up was local suckers. Much to my surprise I dined heavily (when there is a large bowl of tartar sauce close at hand, you know you are sitting elbow to elbow in good company) and never encountered any bones. The fact is, I’ll take sucker prepared and cooked up in this manner over cod at a fish-fry any day. It is a very distinct and delicate flavor in its own right. A ritualistic passage of spring, you might say and especially so here in the Thumb.

The key, I discovered was “scoring” (making slices through the flesh to the skin) sucker filets on a “scoring Board”, which is a wide piece of maple with grooves cut in it at just the right space. Doing so made the bones absolutely more palatable (actually unnoticeable) and I immediately had to have my own scoring board, and have been using one ever since.

Probably the area that gets a lot of press for a festive air about spring sucker fishing, and justly so, is the Rifle River which runs through Omer. Folks come from all over the state to get rid of winter woes and celebrate spring finally waking up to its’ fullest. I have been there and experienced it, and it is all that you would expect, and should at least be sampled. If you haven’t yet, you should. It’ll be a very memorable outdoor experience, trust me.

Of course for local folks like me to the south and on the other side of Saginaw Bay in the Thumb, we have our own “sucker fest” of sorts, but it tends to be of a more private and individualistic nature, and with a wonderful bounty all of its own. I’ve been experiencing it since I was a farm kid and “spring sucker spearing” was and still remains an annual affair in my neck of the woods. My first sucker spear was actually a 3-tined pitchfork and it did the trick, after a fashion anyway, and certainly beat nothing at all. However I was glad when I was able to save up a bit and buy a genuine “sucker spear” at the local hardware store. Having barbed tines made a big difference.

I’ve also always enjoyed spring sucker fishing with a hook and line with my favorite tackle being a 2-hook perch-rig with number 6 or 8 hooks and baited with worms and weighted just enough to take everything to the bottom to reach feeding suckers. There’s not a whole lot of science involved in this method, other than patience, but it is a whole lot of fun, especially when you end up with a pair of suckers on both hooks at the same time.

Another hook and line method I’ve heard about but never tried is using a small treble-hook baited with small bits of pink or yellow sponge that is touched up with anise oil. I’ll probably give it a whirl sometime, but have always been plenty satisfied with using dependable, old fashioned worms, because it works.

One spring sucker fishing method that always intrigued me but I had never tried was using a dip-net. Then I met my good friend Tom Talaski Sr of Rapson 15 years ago, who had been using this fishing method, which involves the whole family of all ages, since 1975. It is quite a festive affair for the entire Talaski clan and I’ve always been quite honored to have been included. It is an event I now look forward to every spring, and besides all their fishing activity at various locations in the “tip of the Thumb”, there is plenty of food always on hand that includes cookies, chips, crackers and fantastic smoked venison jerky from the Talaski smokehouse.

Using a dip-net was a distinct learning process for me, because there is quite a knack to it which requires timing and teamwork, and with years of practice to hone matters, the Talaski clan has matters down pat. Typically when you think of dip-netting for suckers, you might picture a large (nine feet by nine feet) net being suspended by rope and pulleys from a long pole. The Talaski’s however, do everything by hand. The net is dropped by rope over the edge of a bridge, and then it is swung by one person in a pendulum manner until it is at just the right spot, and then it is dropped to settle on the bottom. This is when other family members clad in chest-waders, along with a bit of rock-chucking from others on the bank herd the suckers in the direction of the waiting net. The person holding the rope needs to have just the right timing to instinctively know when to give a sudden jerk up toward the surface.

As Tom Talaski Jr explained to me, when you feel suckers bumping into the net’s metal support rods, it is time to start hauling, because you can’t always see whether or not fish are in the net due to the typical murky water from the spring run-off. Once the net nears the surface, other hands automatically come into play as well to help lift what can sometimes be quite a load of suckers. Generally, if there are no more than eight suckers in the net, it can be lifted all the way up as is. However, if there is a whole load of suckers aboard, a long-handled hand net is required to remove fish from the much larger net. I’ve been there when this is required, and the Talaski family members roll right though matters as a team with everyone involved knowing what to do. And there is quite a satisfaction to seeing 5-gallon buckets steadily filled up with squirming suckers.

For many years, fishing regulations didn’t allow using dip-nets until early April, and I can tell you for a fact that if you are fishing with the Talaski clan, be prepared for more than a few “April Fools” jokes. It is a timeframe that has become a tradition with them. Recent years has seen the start time for sucker dip-netting moved to March 20th because due the weather unpredictability of the arrival of spring, sometimes the sucker run has occurred and waned by early April.

Tom Talaski Sr had told me that if a warm rain happens, the following morning or so should provide good sucker fishing opportunities, no matter what the weather is on the fishing day. This would be the case recently on April Fools weekend. Saturday was selected as the day so all the kids could join in too without skipping school. The day was cold, snowy and blustery but there had been a warm rain just beforehand, so the optimism was there, and it proved correct. The morning would provide almost 50 suckers, most of which would be headed to the Talaski smokehouse now manned by Tom Sr’s son Pat Talaski, who now resides in the home place near Rapson. The fact is, as I’m writing this, I’m enjoying some of that smoked sucker resting close by. It is a great springtime flavor I dearly savor and look forward to.

Sadly, Tom Talaski Sr passed away a couple springs ago, but the legacy that is filled with family tradition and involvement he began more than 40 years ago is still continuing on every spring. There is no doubt in my mind that when the family dip-net hits the water, his spirit is close by and heartily smiling.