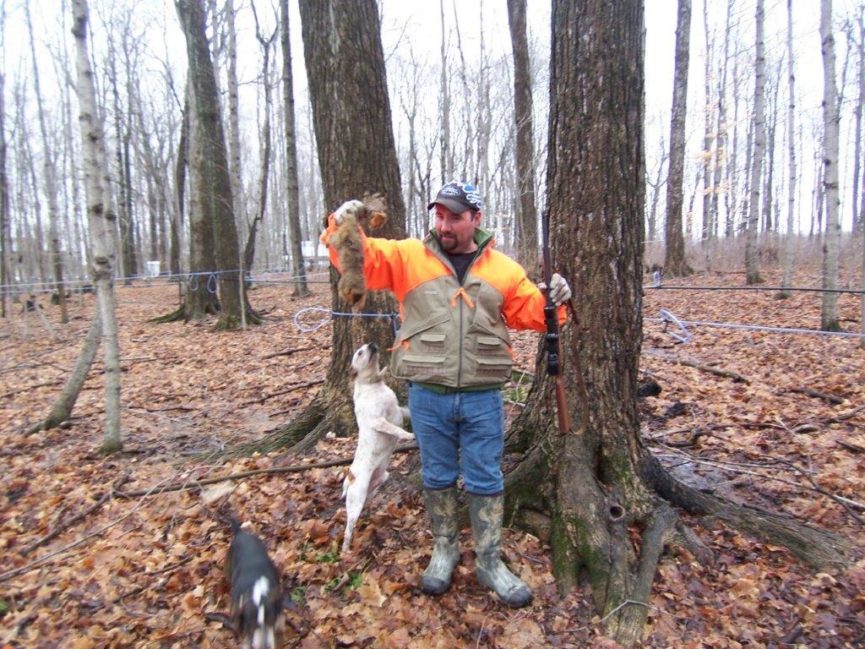 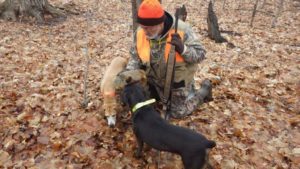 The first time that I ever hunted with what I would call a “squirrel dog” was back when I was a kid. I was hunting near the Cass River with a friend the same age as me, and we were using his unique hunting dog that was half beagle and half Border collie. This stocky dog weighed about 30 pounds and looked pretty much like a beagle with the black and white markings of a Border collie. Crossbreds for a fact can often be incredible hunters, and this dog was no exception. Pheasant season was in full progress, and being farm kids, any small game we encountered in the field would easily satisfy us, and we were with just the right dog for the occasion.

The dog happily howled after everything it pursued, and my friend would comment on the tone of the howl as to what the dog was chasing. When he said it was a pheasant, sure enough it was, and when he said it was a rabbit, yep, it sure was. When my friend eventually said the dog had a squirrel treed, I believed him. Sure enough, we found the dog standing back howling and circling a tree and looking up at a plump fox squirrel flattening itself out on a tree limb. This was certainly my kind of dog, no matter what was entailed in its lineage. Our single-shot shotguns also had a good workout that day on a literal grand slam of small game (including one rooster pheasant, two rabbits, one woodcock, two grouse and three fox squirrels) thanks to a versatile hunting dog some folks would simply call a mutt.

Squirrel hunting is popular in many States including Michigan, but it is truly a passionate pastime in southern regions of our country. It is only natural that dogs would be employed to locate and “tree” squirrels, and using what is termed “squirrel dogs” is a time-honored tradition in the south. It also has a steadily growing following in more northern states.

It was 11 years ago I got a chance to go hunting with an avid squirrel dog fan, Jerry Quinn of Cass City, and his pair of feists. According to Quinn, squirrel dogs that weigh 30 pounds and less are called feists, and those over 30 pounds are called curs. All tend to vary a bit in physical description, and come in all colors, but they share one thing in common, which is avidly and vocally locating, pursuing and treeing squirrels by using both scent and sight. They also don’t just jump about the base of tree the squirrel climbed up, but usually stand back a ways and keep an eye on their quarry that could start traveling from tree to tree thanks to overlapping limbs. A less observant dog would otherwise be jumping up a tree minus the squirrel.

Quinn and I were hunting in a Thumb area maple sugar bush which used plastic tubing to transfer maple sap. Squirrels simply love to gnaw plenty of holes in the tubing, much to the distress of the landowner. We all but had a red carpet waiting for us when we arrived.

Once Quinn released his eager pair of feists in the woods, they immediately started casting about for fresh scent. A recent January thaw had just left the woods with a damp and leaf littered floor that offered excellent scenting conditions, and in no time at all the pair of feists cut loose with sharp “yaps” in hot pursuit. Quinn and I headed through the woods towards the source of an obviously treed squirrel, which had us ducking under tubing while we plowed through blackberry brambles. 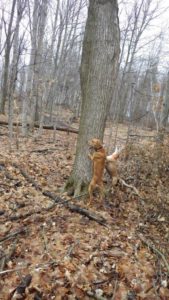 Both feists were circling, yapping and keeping a visual on not one, but two fox squirrels treed in the treetops. Late season fox squirrels aren’t easy, and these did some tree-to-tree transfers, thanks to handy limbs, in opposite directions once we arrived. This didn’t fluster the pair feists any, as each instinctively selected a squirrel and fervently stayed with it. Quinn and I did the same, with him banking right and me to the left.

Quinn was using a scoped, customized Ruger 10/22, and I was toting a scoped Remington 597. Both rifles are superbly accurate, semi-auto “.22’s” that will get the job done if the shooter does his/her part. Before I could get a shot, my squirrel made an exit into a handy hole in a tree trunk. Then I heard the sharp crack of Quinn’s short-barreled Ruger, and I turned in time to see the squirrel come tumbling down out of the tree. It only bounced once on the ground and a feist had it clamped in his jaws and was returning it to his master.

In a matter of minutes the feists were on yet another squirrel, and I was thoroughly smitten with using what is termed as a “squirrel dog”. A couple winters ago I took the plunge and purchased a young black and brindle female Mountain Cur, that I named Jilly. Due to the timing, I started her out on my farm pursuing cottontails, and she fit right into the task assisting my old beagle. The following fall, she joined my old Brittany (and the beagle too) pursuing wild pheasants. Like my friend’s crossbred dog way back when, I don’t mind having versatile hunting dogs.

The best way to start a young dog out on certain, specialized hunting matters, is to have them work with seasoned, older dogs, and that is how I wanted to start Jilly on treeing squirrels. My friend Ken Dalton of Lapeer joined me with two “squirrel seasoned” Mountain Curs last winter, to go hunting in a couple Thumb area maple syrup woodlots that were being pestered by abundant and plastic gnawing squirrels. Jilly got fully introduced into the act of treeing matters, and even learned the hard way of how not to grab a fox squirrel head on that had been shot out of a tree and landed with enough life left into it to still be able to bite and stay latched onto an unsuspecting dog’s upper lip! Yep folks, Jilly sure knows better now!

I’ve always enjoyed working with more than one dog on certain tasks, and treeing squirrels happens to be one of them. Last spring I obtained a young female Black – Mouth Cur (“Old Yeller” in the book was of this breed). Being a natural stub-tail with a black muzzle and rusty-red coat, I automatically named her Ruby. Like Jilly, Ruby is real friendly with people and other dogs, and especially loves children, as well as she is a natural hunter with a willingness to learn. She and Jilly blended right in together as a team from the start.

A couple years ago I found out that Jerry Quinn, who had introduced me to his squirrel dogs, now uses Russian Laikas for this pastime. Thanks to Quinn, during the past summer I came into possession of a 2 year old Russian Laika female named Elsa, a real friendly jewel of a dog too, and now giving me a trio of squirrel dogs to enjoy plenty of time in the woods (the Michigan squirrel season, and rabbit season too, runs from mid-September to the end of March).

While the Mountain Cur and Black-Mouth Cur are very old American breeds (developed by pioneers in the wilderness) that are classified as being in the hound family, the (Old World) Russian Laika is in the Spitz family, and is a very ancient breed with legendary hunting capabilities, which includes treeing their quarry. The fact is, that in color, size and profile, Elsa looks identical to a Michigan coyote, except she has a coiled tail which lies on her back (coyote tails hang straight, and with no coils). Needless to say, folks, despite a coiled tail, Elsa wears a hunter orange vest whenever we venture out into the field.

I am truly looking forward to all the adventures to come with my 3 (versatile) squirrel dogs. Our going rabbit hunting too, is a definite bonus, and it all is a great way to shorten some often very long winter months.

Note: were those maple syrup lines hanging from those trees?   Yep!   Squirrel hunting is essential to keep the sugar bush equipment in great shape.  Squirrels love to chew on plastic spiles and tubing.