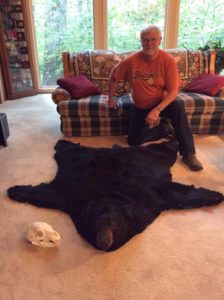 WGD John with his trophy rug from his 2016 hunt

Over 50 years ago my Dad introduced me to one of Michigan’s favorite pastimes – hunting.  Each adventure out of doors was an opportunity for us to share many of life’s lessons. I fondly remember how respectfully he treated other people.  I remember him saying “it takes more energy to treat people poorly, so why do it?”

My outdoor experiences continued in mid-Michigan, which included pheasant hunting in “the thumb”, deer hunting “up north” and eventually an occasional turkey hunt in “God’s country” .  Of course, specific areas of the state provided me different hunting opportunities, but hunting with family and friends always brought us together. Camaraderie was and continues to be most important.  These were things my Dad taught me, as I’ve passed along to my children.

“Time flies when you’re having fun,” so they say.  True that! Raising a family, working and many other obligations all played into my available free time, then retirement magically arrived.  A friend of mine called on me not long into my retirement and asked if I needed a j-o-b. He told me the pay was lousy but the benefits were outstanding.  It was then and there I was christened as Camp Cook at his hunting camp for guided bear hunts. Having not bear hunted before I felt more comfortable in the kitchen.  Each season I went through a self-tutorial on bear hunting as I watched each year’s hunting season take place. The hunters were well fed and I found myself often helping track and or retrieve client’s bears. All good, right? Well not quite.

Each bear season meal planning was my job.  Scouting and baiting bear hunting spots were the guide’s job.  However, I couldn’t let well enough alone. It seemed each year my buddy (outfitter/guide) would grumble about “conflicts in the woods”.  He described how his hunting spots were being tainted by other bear hunters. He further explained that because of the nature of Michigan’s bear season there is not a lot he can do about it.  My reply was quite different…”Why would another hunter mess with your hunting spots?” My line of questions all pointed back to a person’s hunting ethics…or lack thereof. His replies were summarized like this:

Bait hunters are usually a single hunter hunting over a single established bait waiting for a bear to come to the bait.  They have to deal with scent, wind and other issues while trying to outsmart a bear. They are usually in a tree stand or ground blind in close proximity to the bait to be able to harvest a bear.  Bait hunters don’t usually have the ability to just pack up and go to another area. Reason: They have a hunting spot with bait that has been scouted and established for weeks.

Hound hunters usually travel with multiple guides in their vehicles with up to eight, GPS collared dogs.  A chase may go for several hours and for many miles. Dogs can be switched out for fresh dogs any time during the chase.  The guides follow the dogs using the GPS trackers until they tire the bear who often climbs up a tree. At this point the guides walk the hunter into the bear’s location to make a choice to harvest it, or not.  If for some reason the dogs lose the bear or chose not to harvest, the hound hunters simply move to another area and start over.

Once hounds go through a section of woods near a bait hunters location, that bait shuts down for a considerable amount of time because the hounds scare off any bear in the vicinity of the bait, or the bears likely turn nocturnal.  Many hunters wait years to get a bear permit. It only takes one incident with hounds to shut down the bait and effectively end a hunt.

Having both bait hunters and hound hunters in the woods at the same time has both competing for the same bear hunting habitat.  It is a recipe for disaster.

We need to look at a solution that is fair to all who participate in Michigan’s bear hunting.  Statistics show approximately 80% of harvested bears in Michigan are done by hunting over bait.  According to local DNR law enforcement efforts, 80% of bear hunting-related complaints are centered around hound-type hunting.  Statistics speak for themselves. Can future bear hunters have better expectations? I contend bear hunting conflict will continue unless a significant change is implemented.  Bear hunting with hounds deserves its own season, as does hunting with bait. (Completely separate…not just a day, or so.) This distinction would promote safety and fairness for all.   My Dad would certainly approve.