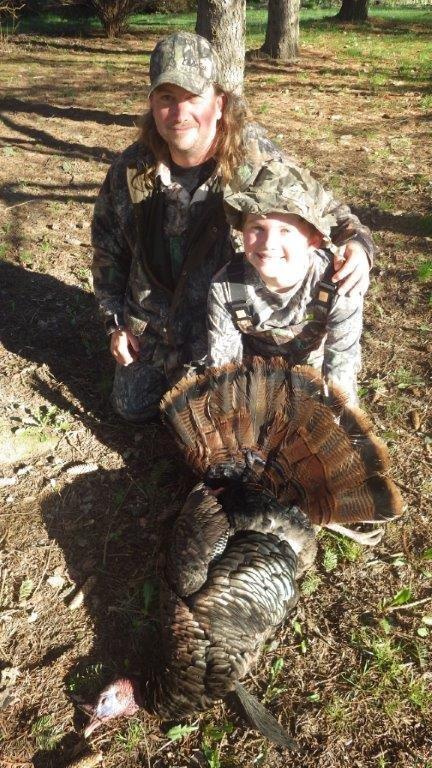 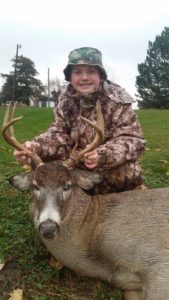 Twelve year old Zack Burnette of Cass City sure appreciates the Mentor Hunting License for Michigan which allows kids 9 and under to go hunting with an adult. This allowed him to start sharing quality time at age six with his dad, Don Burnette hunting cottontails with a petite “Cricket” .22 rifle (a great firearm for little kids), and rabbit hunting remains to be a favorite winter pastime. Father and son would continue to share adventures in the outdoors together.

Thanks to crossbows being legal for archery deer hunting, Zack was able to participate at age seven, when he bagged his first deer, a Thumb 5-point buck. When Zack was still a baby, his father Don had purchased a youth model Remington 1100 in 20 ga, with plans for the future. Zack would use this shotgun to bag his first Thumb turkey gobbler when he was eight years old. He would go on to take more deer (all bucks thus far) and another real dandy Thumb gobbler this past spring. He had also taken a nice buck last December during the muzzleloader deer season, using a .50 caliber CVA (and another buck using the same firearm during last year’s special youth deer hunt), so Zack is no slouch in the deer hunting arena.

Zack was also in the Hunter Safety Class I assisted with last year at the Cass City Gun Club, and I know for a fact that with him already being a seasoned hunter, he passed in flying colors, something the mentor hunting license is a great asset for. There is also no question that Zack’s best hunting buddy is his father, and I’ve been following their hunting adventures for some time now because they are my neighbors who live just across the road from my farm.

I test fired the Ruger “American” bolt-action rifle in .450 Bushmaster, when Randy’s Hunting Center of Bad Axe first brought it out just before deer season last year, and it is a phenomenal performer for deer hunting in southern Michigan (which was once known as the “shotgun zone”). A flat shooter with an effective range of 300 yards, the .450 Bushmaster cartridge is actually quite mellow (in my opinion anyway) to shoot, and the one I test fired lacked a muzzle brake. I put the recoil in the neighborhood of that of a .20 ga shotgun firing birdshot loads and it is certainly a caliber that would be fine for light framed individuals, including women and youth hunters (a muzzle brake softens matters even more – I highly recommend the one produced by Mag-Na-Port).

Needless to say, Zack Burnette was real excited when he ended up with a scoped Ruger “American” rifle in the venerable .450 Bushmaster caliber to use for hunting local deer this fall. He found out firing it at the shooting range was a breeze that offered great accuracy and he was really looking forward to the 2017 firearms deer season’s opening day.

Spot and stalk hunting is an often overlooked technique to use for whitetails, but it is actually a method I have often used in the more open farm country of the Thumb, which deer regularly traverse. They also seek out these more open areas to avoid hunting pressure and know how to instinctively and effectively use the topography and any existing cover (such as ditches and fencerows) to their advantage. First spotting, then planning the route to get in range, and carefully stalking in is actually a very exciting and challenging way to hunt local whitetails.

A case in point happened a few seasons ago when I glassed a deer silhouetted on the skyline a half mile away. The firearms season as well as the whitetail rut was in full swing and when I realized the deer was a solo doe, I began glassing the tall grass in the fence row near her. I soon spotted some fair-sized white antlers protruding up out of the grass, and I planned my stalk, which would take over a mile for me to cover to get in range of the deer a half mile away. They were to the south of my position and the wind was out of the west. I used the topography and existing cover to angle my way in until I was only a couple hundred yards from the deer.

What can happen when stalking is to bump into deer you didn’t know were there, and then the gig is up, but fortunately I didn’t bump into and spook any deer along my meandering stalk. The doe and buck were just to the left of an adjoining fencerow and I approached on the right side and used a plow furrow to keep a lower profile next to the scant cover. I was only 50 yards away when the doe stepped through the fencerow and looked right at me (while I was doing a squatted “duck walk” down the furrow), while the 8-point buck lurched up out of the grass to follow the doe. The doe was just going into full alert when I touched the trigger and dropped the buck (that was finally into full view) in his tracks with a 12 ga slug. It was truly a memorable hunt (including discovering sore muscles afterwards I didn’t know I had, thanks lengthy duck walking down a muddy plow furrow). A good stalk involves both suspense and anticipation and nothing is boring about it at all.

Opening day this year started out dry in the Thumb but didn’t stay that way, and by noon a literal monsoon hit, being pushed by a strong south wind. The morning hunt had proven to be uneventful for Zack and his father. It was after lunch they realized a large herd of deer were in a nearby corn stubble field (thanks to a call from Grandpa Dave Burnette). Careful glassing determined that a nice buck was mindlessly chasing after does, and Zack and Don planned their approach. The deer were grouped up a quarter mile away to the northwest, the strong, rain-filled wind was out of the southeast and Zack and Don would use some wooded cover along the field to close the distance out of sight of the deer.

They marked where all the deer were, double checked there weren’t any deer elsewhere that could be bumped, and started their approach completely out of sight of the deer in a high wind driving a heavy downpour of rain. When they reached the predetermined location, which was as close as they could get without their scent alerting the deer, Zack and Don then carefully approached north to the corn stubble field, with belly crawling being required the last few yards through dense, wet grass to avoid detection from a bunch of watchful eyes. Once at the edge, they began glassing the deer to carefully assess the situation.

Don was the spotter with a binocular and his son Zack was the shooter when they set the shooting sticks up for a steady shot and Zack readied his Ruger and made sure the scope was clear of raindrops. The buck was standing broadside at 150 yards and looking like it was ready to boogey out when Zack settled the crosshair of his scope and touched the trigger.  The large 8-point dropped in his tracks, a downrange performance the .450 Bushmaster (Hornady 250 grain) round is known for doing. According to Don, his son Zack was calm and collected through the whole process, much more than the father was.  A few days later, Don’s 8 year old daughter Zoey joined her brother and father in a hunting blind for an afternoon hunt. Zack would bag his second 8-point buck (at 75 yards) for the season with his little sister Zoey watching the whole affair. Zoey then let her father know she wanted to hunt deer too. Up to this point she had only hunted local cottontail rabbits with her (pink) .22 Cricket rifle and now deer were definitely on the agenda.