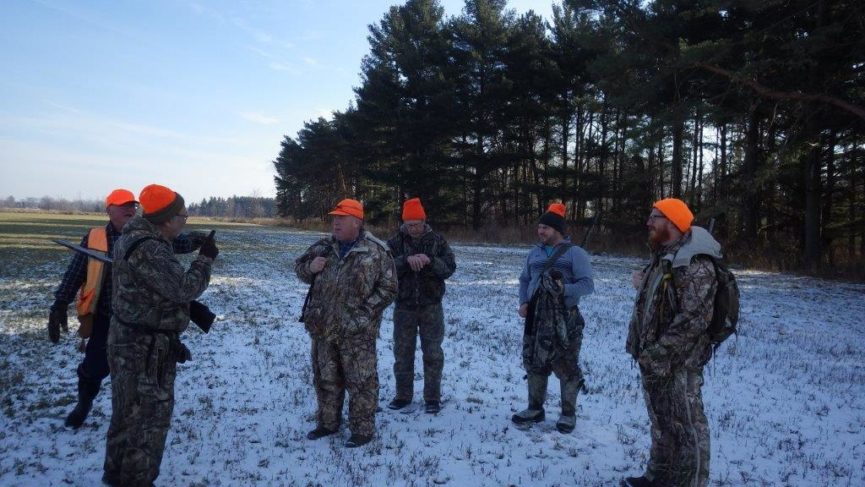 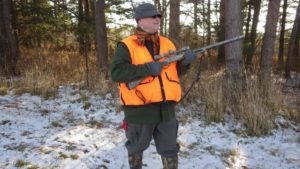 A couple muzzleloader deer seasons ago, I was on a deer drive with friends and happened to be a “stander” at a likely location on the corner of a briar-infested woodlot bordering a hayfield. It was high noon (a good time to do a drive when deer are usually doing their daily “siesta”, often until dark in heavy cover) and according to all the deer sign, there were clearly plenty of deer seeking refuge in the thick and snarly cover, and I was anticipating plenty of action, which can be the case with a well-organized deer drive.

Deer drives don’t have to involve a lot of hunters, and in some cases, smaller can be better, especially when everyone knows the lay of the land. In this instance there were 5 of us, with 3 being standers at key “escape” locations, and 2 drivers, who would be using their scent on the wind as well as their zig-zag movement to dislodge any deer from their notable safe havens. Zig-zagging in this instance is better than a straight on approach, as it is more confusing to deer that might otherwise try to slip through or around the drivers.

The 2 drivers were Bob Walker and Dick Randall, both of Kingston, who have been performing deer drives together for over 4 decades, and they know their craft well, and the ground we were hunting. There was an easterly breeze that day, and deer (usually) prefer to escape matters whenever possible, with a headwind, and being on the northeast corner of the woodlot, I had a great view of any deer trying to escape to the east across a tilled field, which would happen shortly after the 2 drivers started in. The deer were, no doubt, resting close to the east side of the woodlot, and didn’t hesitate to hit the exit. Late season deer are like that.

I was armed with my scoped, 50 caliber Traditions Vortek StrikerFire, a hammerless muzzleloader which has proven to be a very dependable and accurate hunting rifle. However, when the dozen or so deer exploded out of the cover, they were 100 yards away, all grouped up, and running full tilt. There were 3 bucks in their midst, and one quite respectable, but it wasn’t an ethical shot that I wanted to even attempt. I remained at the ready, hoping for something much closer and offering a viable shot. Although I still had a (non-restricted) buck tag in my pocket, bagging a nice plump doe was certainly on the agenda, if the opportunity presented itself.

No more deer came bounding out, and I eventually heard crackling brush and saw a hint of hunter orange, as Dick Randall approached near my position, and was forcing his way through some thorny shin-tangle which clawed at his legs, and left more tears in his pants that already had tatters from previous deer drives. He had only about 30 more yards to reach the edge and complete his drive when matters suddenly happened.

That is when a huge doe came leaping out of the brush and stopped fully broadside to me, 20 yards away, while she stared back at Randall’s steady advance. I automatically put the crosshairs on her shoulder and touched the trigger, which was followed by a loud “click” due to a misfire, which was my first ever with a 209 primer. The doe briefly snapped her head in my direction and then started loping away while I frantically broke open my muzzleloader, removed the bad primer and was in the process of digging out another primer when a huge buck (one of the biggest I have ever encountered in over 50 years of deer hunting) jumped out and stopped exactly where the doe had been, as he watched the doe loping away. He then began casually loping after her.

Well, folks, you might say I was in a bit of a panic re-priming my muzzleloader right then, and I do believe I did it in record time. The buck was about 60 yards away when I put the crosshairs on him and had he angled left or right for a quartering shot, I would have fired, but he remained going straight away, and I didn’t feel right about the shot. I’m none too fond of what is referred to as a “Texas heart-shot”, because if you are off just the slightest, you will have a crippled and hard to recover deer on your hands. And this buck deserved better.

Dick Randall was soon stepping out of the cover, and he could tell by my wide-eyed expression something extraordinary had just transpired, and according to him I was “speaking in tongues” for a while, and clearly mumbling – “big buck, big buck”…..

The fact of the matter is, that big buck was never meant to be mine. Had my muzzleloader not misfired, I would have shot the doe dead in her tracks, and would have been standing there with an empty rifle when that huge buck came bounding out. And yep, folks, I would have still ended up “speaking in tongues”!

As for my misfire, after the drive, my muzzleloader fired like clockwork into a stump. I do believe that bad 209 primer had been on a special carrier for some time, and may have experienced some previous moisture situations. I now only carry brand spanking new 209 primers when muzzleloader hunting.

A very memorable deer drive occurred a couple decades ago during a muzzleloader deer season, when my son Josh came home from college for the Christmas Holidays. It involved just the 2 of us, and it is a drive technique I refer to as “active team hunting”. It was midday, after not seeing any deer activity in the morning, when I decided to check a property we had permission to hunt. There was an impending snowstorm which was just starting up (actually a record 17 inches of snow would come down that day) when we arrived, and a couple inches had already come down. That is when we saw the very fresh deer tracks, possibly a doe with a buck in tow, crossing the farm lane, and I stopped our Jeep right there and we got out and readied our muzzleloaders.

I found the tracks where the pair of deer had milled around a bit when they sensed me on their trail, and then headed out in overdrive on an angle towards Josh’s position. I went into overdrive as well to keep them going in a panicked straight line. Nope, folks, I can’t run anywhere near as fast as a deer, but the deer didn’t know that. I soon heard the boom of a muzzleloader up ahead, and soon came upon Josh who had an excited expression on his face, and I could see deer hair whisking around on the ground with the hard driving snow.

The storm had reached blizzard proportions when a doe came exploding past Josh, closely followed by a forkhorn buck, which Josh shot in the ribcage at near pointblank range (close enough that the muzzle blast created a perfect sphere in the hair around the entry hole). I could tell there was lung blood on the snow, a lot of it, but it was quickly getting covered up in fast accumulating snow, and I knew this was no time to wait. I told Josh to cover the left flank while I stayed on the blood trail, which soon disappeared.

Fortunately, the buck had only covered about 40 yards before piling up with a visible foreleg sticking up out of what soon would have become a snowbank. It didn’t take Josh and I long to field dress the buck and get it to the Jeep, and then home. The Thumb ended up being literally shutdown for the next couple of days due to the snowstorm.

Hunters these days tend to wait for the deer to come to them. For me, there are certainly times to take the hunt to the deer.

Good, old fashioned deer drives are something I dearly look forward to every deer season.