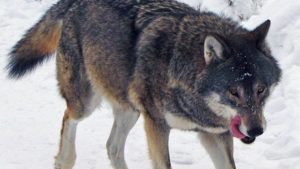 First, let me introduce myself. I am Gary Gorniak, President of the Straits Area Sportsmen’s Club (SASC), Vice President of The Upper Peninsula Sportsmen’s Alliance (UPSA) and Vice Chairmen of the Eastern U.P. DNR Citizens Advisory Council (EUPCAC). I am not anti-wolf; a gray wolf has a place in wildlife. But like all wildlife, the gray wolf has to be managed. You can’t pick and choose to manage one without affecting the other, especially a skilled predator as the wolf.

Our 2020 deer season in the U.P. was a disaster and will probably go down as one of the worst in history.  Our deer herd in the U.P. is in serious decline. I know there are multiple issues affecting our deer herd, like loss of habitat and winter kill. But predators – wolves in particular – have decimated our deer herd. Some areas are worse than others, but overall they are taking a severe toll on our deer.

U.P. sportsmen have seen this coming now for some time. We have been working to change the 2015 Michigan Wolf Management Plan to expand the gray wolf harvest area to the entire Upper Peninsula. We want it to to include hunting and trapping as a legal methods for wolf harvest in Michigan, and the goal of maintaining a healthy population of 300-400 wolves in the U.P.

In Michigan we have exceeded both requirements for more than 23 years.

Resolutions to delist have already been passed by Michigan United Conservation Clubs (MUCC) with a 78.6% margin. UPSA passed it unanimously and also EUPCAC passed it unanimously. Sportsmen need to stand together on this issue. The “anti’s” have an endless supply of money and will be working to stop any management of gray wolves in the U.P.

The SASC has been very active in talking to sportsmen across the U.P. We implement Facebook surveys, we feel that it is very important to find out how sportsmen feel about issues that affect them. We target U.P. sites, so most of the people taking the survey are either U.P. residents or people that have an interest in outdoor sports in the U.P. These surveys are voluntary opinion surveys and have no science behind them. But in saying that, when you have hundreds or even thousands of sportsmen telling you the same thing, I think it matters. I have attached two of our December 2020 surveys with comments. One is our 2020 Firearm Deer Survey the other is our Upper Peninsula wolf survey.

Living with wolves is starting to be a bit concerning as the wolf population grows. On Brevort Lake in the past few years we have had wolves chasing deer right through our back yards in the middle of the day. We have had many wolf sightings in the city limits of St. Ignace. Just last week, a young lady jogging through the state park in town ran into a wolf. The wolf was not aggressive in any way, but needless to say the young girl was scared and climbed a tree to be safe.

These occurrences are happening with more frequency as the wolf population grows. I am not talking about 695 wolves; that is the rock bottom low number that the Michigan DNR guarantees to the Fish and Wildlife Service that there is in Michigan. The real average number is north of 1,200, probably twice the official count.

As the gray wolf population grows they will become their own worst enemy. Pack sizes will break up into smaller packs, which we are seeing now, and infighting amongst the wolves will increase leading to higher wolf mortality and what will happen next is not predictable. We had one incident in 2019 where a wolf was shot in self-defense. Wolves don’t like people and usually stay away from populated areas. But as the wolf population increases and food sources decrease, these wolves expand their territory and the reason for this is there are just too many of them for the present U.P. landscape. Buy not managing wolves correctly we are doing disservice to the U.P. communities, a disservice to other wildlife, a disservice to sportsmen and a disservice to the wolf itself.

We are working with the Michigan Natural Resource Commission and the Michigan DNR to make gray wolf management a reality. We will need some of your support. Those fighting against us keep telling us that the gray wolf is endangered, but there are more than 70,000 gray wolves in Canada and Alaska that is a far cry from being endangered.