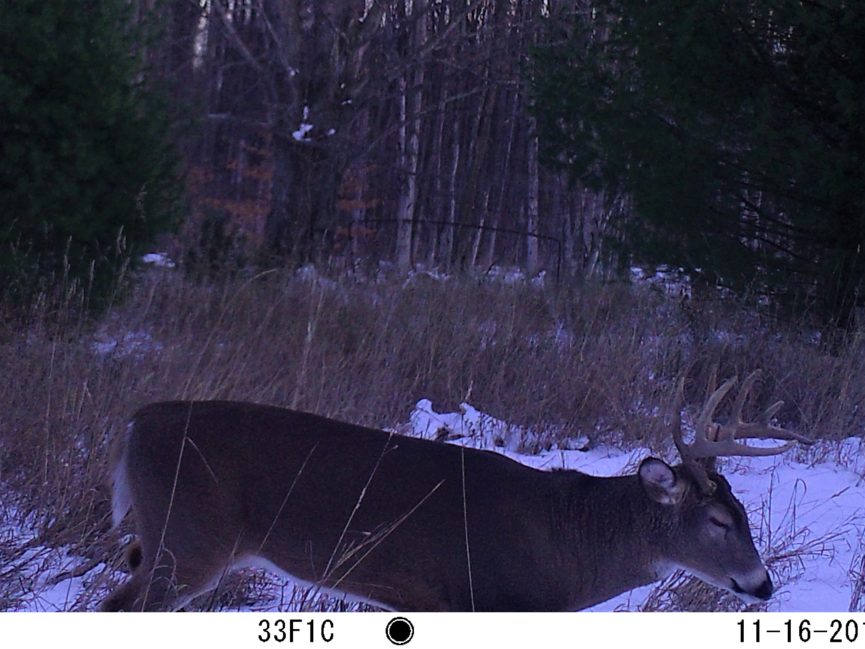 Since I was planning to hunt the field behind my house this deer season I decided in late October to put a
trail camera out in likely crossings. It was easy enough to drive them out & check them occasionally.
The first location produced only one sighting, the doe was so close that all I could see were here ears and
the top of her head. I moved it to a different spot and saw a few does. Because of my situation the camera
stayed in the same spot until Dec. 1st
.

There were well over 100 pictures on it this time, only a hand full were of actual deer. The rest were from
the recent storm I had not thought about when I placed the camera. White pine branches can bend a long
ways in a strong wind. So I was deleting pictures when suddenly the snow was gone and I could see a
deer, finally. It was a doe. As I continued to look I saw a few more doe pics and then two different small
bucks.
On November 16th

there is a very nice buck standing almost perfectly in the center of the frame. On Nov.
16 ! I thought. It was clearly daylight, I quickly looked at the time. I was watching the field that evening
and stayed until dark. This 10 point was only 50 or 60 yards away from the edge of that field and even
though he appears to be headed away from it on a regularly used trail he obviously stayed out of sight.
You don’t get to be a 10 point by doing stupid stuff during the gun season. I was a little surprised he was
moving at all during daylight after the gun season started. On the other hand there has been very little
shooting around here this year.
It was not until I had downloaded and enlarged the pictures that I realized this was the buck I got on
November 25th

, nine days after the picture was taken. A close inspection of his antlers along with a nice

‘mane’ along the back of his neck convinced me it’s the same deer.
Get out there whenever you can, there are still nice bucks roaming around and sometimes if you are lucky they do in fact do stupid stuff.