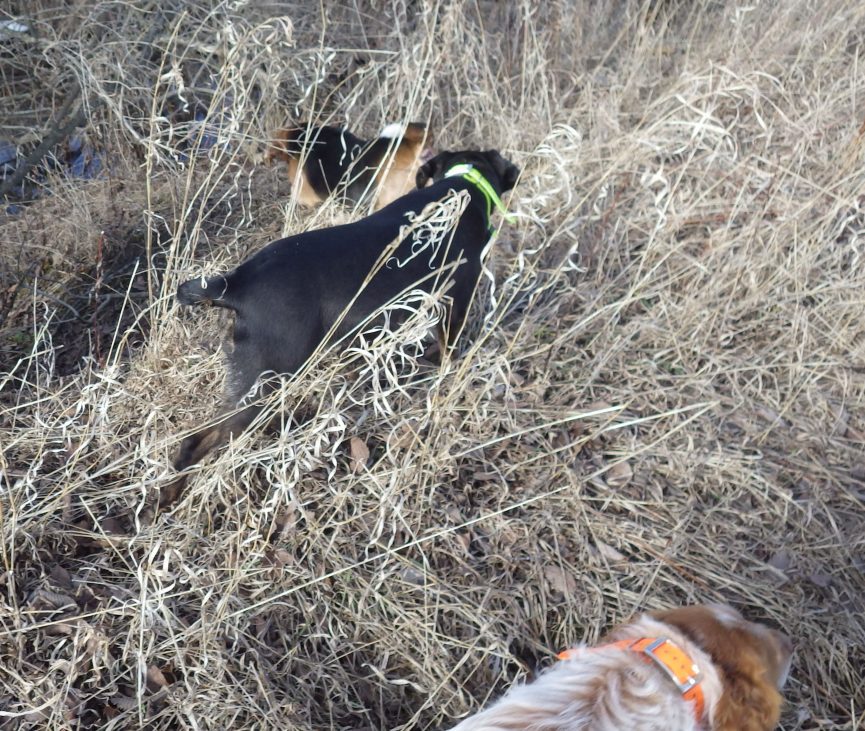 The first dogs in my memory were the farm dogs we used for herding our dairy cows. This was back in the 1950’s when the Thumb had countless small farms, usually entailing milk cows in the mix. A common dog in the scene was a collie-type that had been brought into the Thumb by settlers, many from Canada (my great grandfather Townsend Lounsbury came to the Thumb directly from Canada). The dogs were what we in my local neighborhood called “coallies” due to the fact most were a longhaired dark brindle-colored affair, with black muzzles. They usually had the typical white “neck collar” of collies but had shorter noses and blockier heads than the modern collie breed today. There is no doubt that their original ancestors hailed from Scotland and probably other breeds were added in along the way in the New World.

The coallies were not only great herding dogs, but during the heyday of pheasant hunting in the Thumb, they held their own in flushing pheasants with blue-blooded bird dogs (our one coallie would even lockup on point). They were also pretty good rabbit dogs, making them a very versatile breed. Sadly, when small working farms with various dairy herds went by the wayside in the Thumb, the coallie breed that I knew (which other than being a set type with no registration entailed) faded away.

Thanks to my early association with our versatile farm dogs, I have ever since looked upon my hunting dogs as being versatile in the field. I have been with bird hunters who became upset when their dogs showed an interest in rabbits, and I have been with rabbit hunters who also got upset if their beagles started chasing pheasants. Well folks, I don’t have any issues with a dog being a hunting dog. An example was my beagle hunting pheasants with my Brittany and the Brittany in turn joining the beagle for a good ‘ol rabbit hunt (they were a great team but are sadly now gone). In this manner, all my dogs have a very lengthy and happy hunting season from fall to spring which we all much enjoy.

There was the blue tick hound I owned some thirty years ago which was a dandy pheasant and rabbit dog, and even retrieved. A whole lot has to do with how you train a dog, especially when hunting is in their genes, which pretty most all dogs have. A truly versatile breed for both upland and wetland environments is the Labrador retriever, and a good example was my lab “Ebony”.

We shared more than a dozen years together, and we were tight enough in our relationship that my wife Ginny claimed Ebony and I were attached with an umbilical cord. Ebony knew when we were pheasant or waterfowl hunting, and she also knew when we were rabbit hunting, and she tutored younger dogs in all avenues along the way. She also retrieved downed and wounded game which may otherwise have been lost. I will always remember the time we stalked in on a remote pond filled with mallards, and Ebony without any commands from me automatically knew we were stalking in slow and followed my lead, and went to work only after the shooting started. She without question could read my mind.

Of course Ebony, like all dogs, went quickly from a puppy to her prime, and suddenly was an old dog, and all too soon gone. If you are lucky, you get only a decade to share together. It is a reality I have learned to accept after a lifetime association with dogs, but I remember each and every one.

An organization which promotes versatile hunting dogs is the North American Versatile Hunting Dog Association (www.navhda.org) and they place an emphasis on dog breeds which can readily cover all upland and wetland hunting avenues, as well as small game hunting, and including trailing and recovering wounded game. They have quite a list of breeds, which I’m sure will continue to grow. At the very top of the list is the German Shorthair Pointer (GSP), a breed I have just started working with (after 50 years of Brittany spaniels), in the form of my one-year-old female “Zelda”, who is very intelligent, eager to please and certainly versatile. She has just finished the early and late pheasant seasons, and cottontails are now on her eager agenda. She has also proven to be excellent in water retrieves and was a natural in this regard. I’m very impressed with the GSP breed for covering a variety of hunting applications and see why it is number one on the NAVHDA list.

About five years ago I purchased a young (brindle-colored) mountain cur female I named “Jilly” and a year later, a friend gave me a female black mouth cur pup I named “Ruby” (due to her rusty-red coat). Both of my “cur dogs” share a very similar heritage and are very old American breeds developed by pioneers to be very versatile dogs in a rugged wilderness environment. They could herd livestock, loyally guard the homestead, and hunt anything required of them, including small game, bears, cougars and wild boars (“Old Yeller” was a black mouth cur). Both cur breeds are also noted for being great “treeing dogs” for squirrel and raccoon hunting, which I use mine for (wintertime squirrel hunting in this manner is a great action-packed adventure and is growing in popularity in Michigan).

I also use my curs for pheasant hunting on my farm where they have proven to be great flushers. They are also key dogs whenever I perform a rabbit drive and are dependable at finding wounded game. If I must recover a wounded, difficult to track, deer in my tall prairie grass, I’ll leash up one of my cur dogs to assist in sorting matters out.

I had an interesting experience last winter relating to my farm pond. I try to make sure all my dogs get plenty of exercise whenever possible, and I have a large backyard which allows plenty of romping room, and I’m on hand to supervise matters, which works towards our being a cohesive team. There were several times my two cur dogs would be become real interested around the dock, which included trying to paw up the wooden step resting on the bank. I assumed it had to be muskrats denned in the bank underneath the step.

Then came the frigid day my cur dogs went charging through the trees toward the pond and left me in their wake. When I arrived at the scene, the two cur dogs were frantically pawing at the step once again. That is when I saw tracks in the snow leading from my yard out into the pond to a perfectly round hole in the ice. After examining the tracks, I realized I had a river otter enjoying the dependable benefits of fish in my pond and likely had a den in the pond’s bank underneath the dock step. It had obviously escaped into the ice-hole and swam under the ice to the refuge of its den, and the cur dogs knew it was there.

River otters can be bigger than you might think, and this one was no tiny tot. I measured its pad prints which were three inches across! I’m glad the otter made good its escape, because this was an encounter which could have turned into a real nasty melee, and otters aren’t pushovers, as well as there is no “back down” in a cur dog. I never saw any sign of the otter after that exciting event, and my cur dogs soon lost interest in the dock area. Something tells me that after such a close call, the otter decided to pack its bags and seek out new digs, which works for me, because otters can be hard on the fish population in a pond. You might say my two cur dogs did their duty in faithfully guarding the homestead.

Yep, folks, versatile hunting dogs are certainly my cup of tea, and life wouldn’t be the same without them.