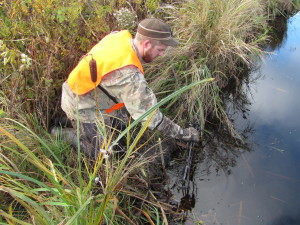 The coffee was fresh and smelled great.  As I approached the kitchen cupboard to retrieve a cup I heard a commotion outside.  It sounded as though an argument was ensuing down the two-track from ELO’s world headquarters.  Since my original intent was to grab a full cup of coffee with a dollop of milk I kept my focus.   I then stepped onto the front porch to check things out.  As soon as the screen door closed behind me I caught a clue.  I saw a small gathering about 75 yards away…all looking at three or four small birch trees lying across their driveway.   These birch trees were small, but, nonetheless a hindrance to the neighboring cabin owners in driving home at the end of their weekend getaway.

Da beavers were back!

Of course, this became an opportunity to shine the “world of trapping” upon the neighbors.  You see, there’s a ‘back story’ in ELO’s neck of the woods.  The lake level dropped about a foot and a half when a 50+ year old make-shift damn at the outlet gave way.  Conversations said the old damn was a hodge-podge of sand bags and timber from as far back as the 1950’s.  A few years ago it partially gave way due to deterioration.  Then along came our furry, flat-tailed friends to the rescue.   They, too, had a vested interest in keeping lake levels up.  Problem:   Maintaining a natured-engineered damn while also keeping beautiful trees upright on your property…particularly the ones that were part of your landscaping project 20+ years ago.  Solution:  Balance through managed resources.

The downed timber blocking their vehicle’s egress was removed without much labor, however, the conversations continued.  Several hours later a few “locals” seemed in favor of trapping the beavers in an effort to manage their numbers.  In assessing the area I observed at least two very large beaver homes. My solution was to take no more than four beavers from the lake and nearby waters.  I explained that even the best plan of attack has its pitfalls, but my plan seemed to be “middle road”…somewhere between some folk’s desire for complete eradication and some for complete sanctuary.

With Michigan’s trapping season underway there was great optimism.  With a light green light to manage some nuisance beaver, the optimism grew to enthusiasm.  I embraced enthusiasm by setting my alarm for pre-dawn.  The next morning arrived much like the day before…a handful of downed young saplings stretching across the ‘two-track’ feeding the northeast side of East Lake.   I found myself tossing these toppled trees out of the way…but, quick to keep them in view of the cabin passer bys.  In a handful of days nearly each lakeside cabin owner had a beef with our local engineers de Genus castor.   Like anyone, I also want the lake levels maintained, but not at my (trees) expense! 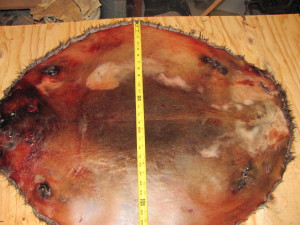 My first string of beaver sets consisted of a half dozen 330 body traps.  These are great for a variety of reasons, but a clean kill was certainly atop the list.  I chose two corridors…one in a marsh area and the other in a pinch point near the lake shore.  I chose to set the remaining traps at a couple other locations a couple miles away.  If I were to talk the talk, I needed to walk the (conservation management) walk, accordingly.   With the potential of two beaver kills at each of the three locations, I found myself fully awake before the sun rose, and certainly before any such alarm.  Within that first week I limited out at each location…two beavers each.  It is the limit I set for each habitat.

The most peculiar set of events began to take place within a week of “thinning the herd”.  The down saplings nearly came to a screeching halt.  Many of those ‘for or against’ had nearly forgotten about the early morning conversations out by the driveways or two-track…and, the lake water levels remained constant.  I remember an old trapper buddy telling me to “assess the situation before the situation assesses you”.   Knowing what that local habitat likely holds can provide good game management knowledge moving forward.  “Know before you go”.