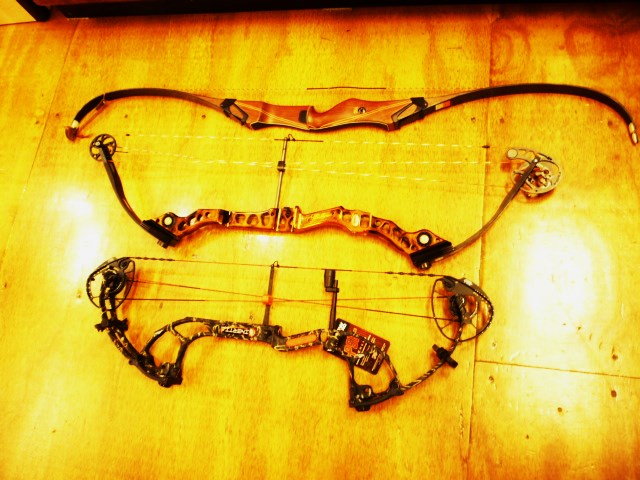 When I was a kid, maybe six or seven years old, my Dad took up bow hunting. I remember watching him shoot his Bear recurve in the back yard and I was hooked.  I couldn’t wait to start shooting a bow. My first real bow was a green, fiberglass recurve with a white rubber handle that doubled as an arrow rest. I think it was all of 30 or 35lbs. draw weight.

We shot wood arrows with glue on tips and feather fletching. I don’t remember there being any particular attention paid to matching arrows to draw weights but most hunting bows back then were not much more than 45 or 50 lbs. You have to remember, the compound bow had not been invented yet.

I graduated from that starter bow to a 40 something lb. Bear recurve and a new box of cedar arrows. I had a shooting glove and a leather arm guard. There were no release aids and no sights of any kind, you learned how to shoot instinctive or you didn’t.  I practiced a lot, and I spent a lot of time searching for lost arrows. I have always been amazed at how well an arrow can hide itself in a couple inches of grass.

Other than scaring deer I never managed to ever hit one with that bow. Some of those shots were pretty close and my shooting skills seemed to diminish as rapidly as the approaching deer I intended to shoot. I had buck fever back in those early days that but it didn’t matter if it was a buck or not. As soon as I saw a deer anywhere remotely close my heart went into overdrive and for some reason that would seriously affect my aim!

The first compound bow to come on the market got about the same response from hunters that the Glock handgun got when it first came out. Maybe worse for the compound, it had a wood riser and a series of cables and wheels that just looked like they would catch on every branch and weed wherever you went. I don’t remember how much they weighed but I suspect they were a bit heavier than our current version of the compound bow.

Eventually the compound evolved and caught on. I was a senior in high school when I bought one. The difference it made in my shooting was pretty dramatic. I still shot instinctive and continued to use a 3 finger shooting glove. Our back yard range was only about 20 – 25 yards but I shot a lot and rarely missed. The problem was, there were no deer in the back yard, I continued to scare deer and dig arrows out of the ground and the occasional tree.

After I finally did connect on my first deer, a doe, something changed. After that I still missed but every now and then I connected too. I continued to shoot that first Darton compound for many years and eventually added a set of sight pins. It wasn’t until I finally upgraded to a new Bear Compound that I started using a release. I was still shooting aluminum arrows and I still have and shoot that particular bow. It isn’t as fast as many of the bows made today but it has taken many deer for me in the 20 plus years that I have been shooting it.

This year I started shooting a Mathews single cam and even though there are a lot of changes in archery equipment the basics of bow hunting are still the same. You have to practice and be prepared to chase a few arrows hidden in the grass…and lost ones are not inexpensive!  Get yourself in range of a deer, draw undetected and make a good shot. With proficiency on your side you won’t have far to track your animal.    Besides , the next “trophy” is out there somewhere waiting to rekindle that first time feeling of bow hunting!