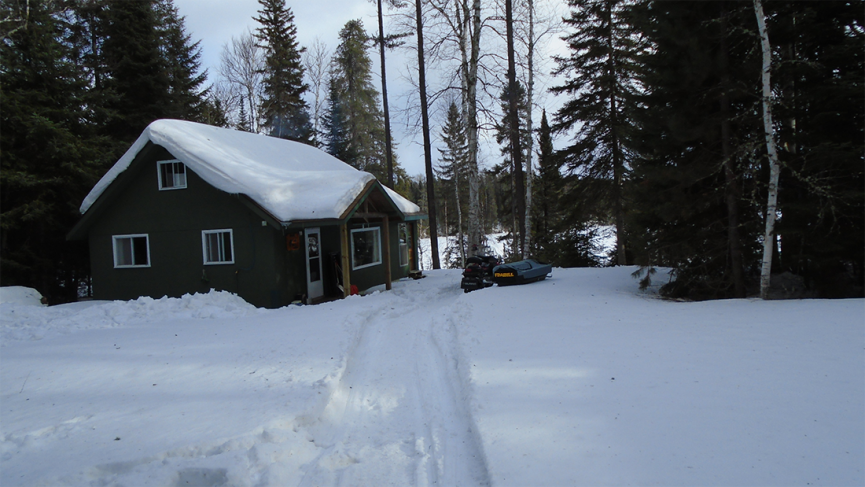 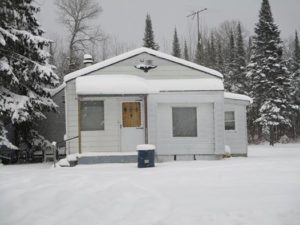 Ross: come n get your barrel

I recently received an e-mail from my friend Gary Morgan. When I opened it I saw a picture of his place at ELO (East Lake Outfitters). There was snow up around the front door and no sign that anyone had been around recently. His message was that he had an urge to go up there and get a fire going in the stove and maybe start a small trap line…asking that I drop what I’m doing and join him.
The image took me back to my own cabin in Ontario. I have had the same thoughts many times. I just want to load up the truck & leave the daily noise and clutter of life here at home behind for a while. There is no electricity or phone service there and this time of year it is very likely there won’t be any other people around either. I can not trap there but the ice is probably thick enough by now to do some fishing. If not then there is always something to do. Regardless, it’s not so much what I can do as much as it is just being there.

“It is especially quite in the winter, other than the sound of a crackling fire in the wood stove” 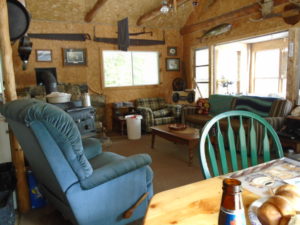 It is especially quiet in the winter, other than the sound of a crackling fire in the wood stove. There is just something about the place that keeps me going back as often as possible. My wife does not care to join me there, she says she will start going with me when there is running water and electricity. That’s to bad because it’s 2 miles off the nearest paved road and I don’t think there are any plans for running “hydo” that way anytime soon.
The Canadians typically refer to electricity only as hydro, a shortened version of hydro electric power and as a tip, don’t ask for anyone to fill an LP tank for you there either. The first time I did that I was met with a confused stare, when I clarified “Liquid Propane” he looked away and muttered “we just call it propane”.
Some may find the lack of electricity & running water a real problem. We have found ways to deal with it. In most cases it’s not nearly as bad as some (my wife) might think. Yes, the outhouse can be a little unpleasant but it is fairly new and we keep it as clean as possible. There are three propane lamps in the cabin and a 55 gallon water tank in the loft supplies gravity fed water to the kitchen and bathroom sink & shower. I will explain the shower in a minute. The refrigerator is an old Servell propane model (in the summer) in winter I hang an old quilt over the bathroom door and crack the window just enough to keep it cold, that is our winter fridge, some nights it is more of a freezer. A deep cycle battery powers a CD player and a 12 volt fan. The fan helps circulate heat from the wood stove and cool air on the summer.
So you see there is very little lacking there, propane lights, refrigeration & cooking. Water is pumped from a shallow well outside. With the help of a portable generator I can pump water into the holding tank and a couple of old stainless 5 gallon milk containers for drinking water in the summer, in winter we bring bottled water for drinking and melt snow for wash water. It’s an easy process, a large metal tub melts snow on the wood stove and then it is poured into a 5 gallon bucket. We use cheese cloth as a strainer, you would not believe how much debris is in a few gallons of snow. Did I mention the sauna ? A great way to get clean in the winter is in the sauna, some warm water splashed over your head after 30 minutes in there and you come out fresh and clean.
The shower is gravity fed from a 5 gallon bucket in the loft, it’s a simple process to warm a tea pot full of water and then mix it with tank water in the bucket. I provides a nice shower but I am told the girls sometimes need a refill, especially if they have long hair or just like a long shower. A single bucket will provide two quick showers.
Doesn’t it get pretty cold up there in the winter ? It sure does, there have been several mornings when the temp dropped to -40 and it was still warm in the cabin. If no one gets up to put wood in the stove over night it can be as low as 50d eg. inside but the wood stove does a great job of keeping it warm inside. There have been times when it is to hot in there.
I really cannot put into words why that place has such a strong hold on me, it is terribly cold at times, hot and buggy in the summer but some times it is the perfect temperature and the sun shines every day and the fishing is better than anywhere else I have ever been. I have hunted bear and partridge there. The bird hunting in Ontario is hands down better than anywhere I have ever been in Michigan, one of these days I may give moose hunting a try one of these days too.
Maybe it’s just because the phone never rings and there is no TV or internet, life is just simple there.
I can’t wait to get back, thanks Gary…