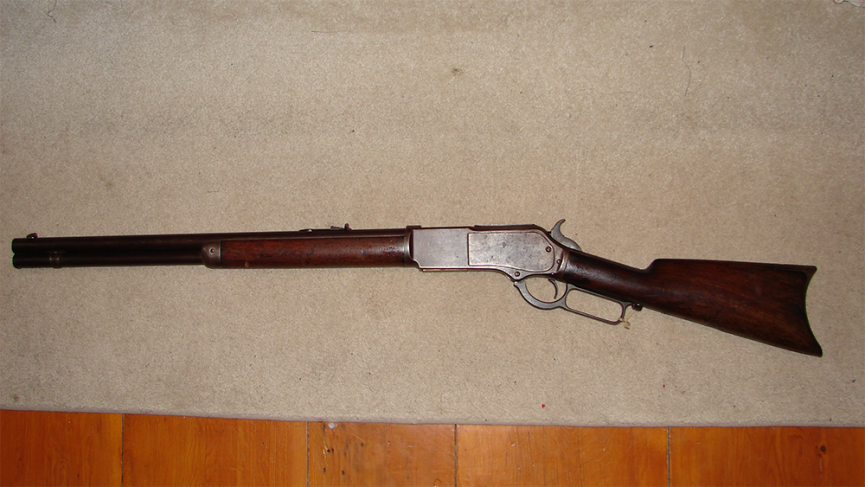 I wanted to start this off with something old and work my way up to more modern rifles but will limit it to guns I can get my hands on or at least some good photos. Thank you to everyone kind enough to loan me their classics and not yet classics. Please e-mail me if you have a gun you would considering featured and WGD or myself would be happy to consider; attaching quality pictures are all that’s necessary.
The rifle featured today is in fact a very old classic. Its a Winchester model 1887 chambered in a 45-60 black powder cartridge. Most of us have never had the opportunity to shoot this particular caliber and load, including me. Winchester’s model 1887 chambered in 45-60 translated to a .45 caliber using 60 grains of black powder. By today’s standards that is probably not a very powerful cartridge. My modern caplock muzzleloader is .50 caliber and I typically load it with 90 grains of black powder. It would be very interesting to chat with the original owner of this rifle…listening to all the hunting adventures it has been taken on. I would really like to know his opinion of how it performed as a hunting cartridge and what animals were taken with it. LIke the saying goes, “if only (guns) could talk”.
It is a pretty heavy rifle, especially by todays standards so the recoil is likely not too punishing. The available loads would have been round or flat nose lead bullets weighing 300 grains or more. As there were several cartridges in .45 caliber, black powder charges usually reached 100 grains, or so. This was probably considered pretty mild in it’s day. Many of the old Sharp’s single shot “buffalo” guns were chambered in these huge old rounds, also.

Looking closely at this particular Winchester it is obvious that it was used a lot and considering it was made in 1882, it is still in decent condition. I do not know if these were originally blued or if the current brown patina is because of it’s age, but it is a very even color brown. There is evidence that someone tried to tighten the dovetail slot where the magazine tube fastened to the bottom of the barrel. They used a punch to try and expand the metal around the edges to tighten it up. It looks like they were only moderately successful. The gun is also missing a dust cover from the top of the action. This was a sheet metal cover that attached to the top of the action, covering the bolt and sliding back and forth with the bolt. It was not necessary to the operation of the gun but would certainly enhance the value of this gun to a collector.

I find the crescent buttplate interesting. It’s sharp curve must have made recoil less than pleasant, I can only imagine that even a light load of 60 grains would be reason enough to shoot no more than necessary. Maybe this was an intential design to instill excellent marksmanship skill..? Probably not. Enhanced astetics? Sure.
There were no options for mounting scopes on rifles in this gun’s era. Sure there were some optics used as far back as the civil war but they were not typically ever used on the average hunting rifle. I suspect that shots with this gun were rarely taken beyond the effective distances any of us would expect using open sights today. Would this gun cleanly kill a deer beyond 100 yards ? I don’t doubt that it would and was probably used on larger game as well. The old saying, “it’s hard to stop a moving train” applies when you are talking about big heavy bullets. Even at moderate speeds the 300 grain lead bullets penetrate a long ways. Their rainbow trajectories are probably the biggest limit to their use in longer range shots. Not that they could not be used at longer ranges, because they were. The shooter just had to know where to hold the sights…thus, the (far-fetched) pioneers of the bullet drop compensators. 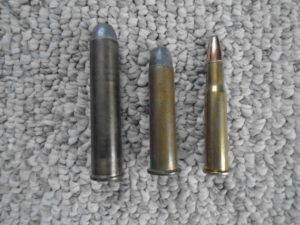 Here is a very old photo of a camp somewhere back in the day of this gun. There are several different types of lever guns being displayed by these hunters but they were all obviously capable of taking game as big as elk and moose. I wonder what these men would think of today’s modern rifles. 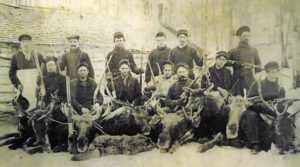 Jim can be reached at:   jkushner.wgd@gmail.com