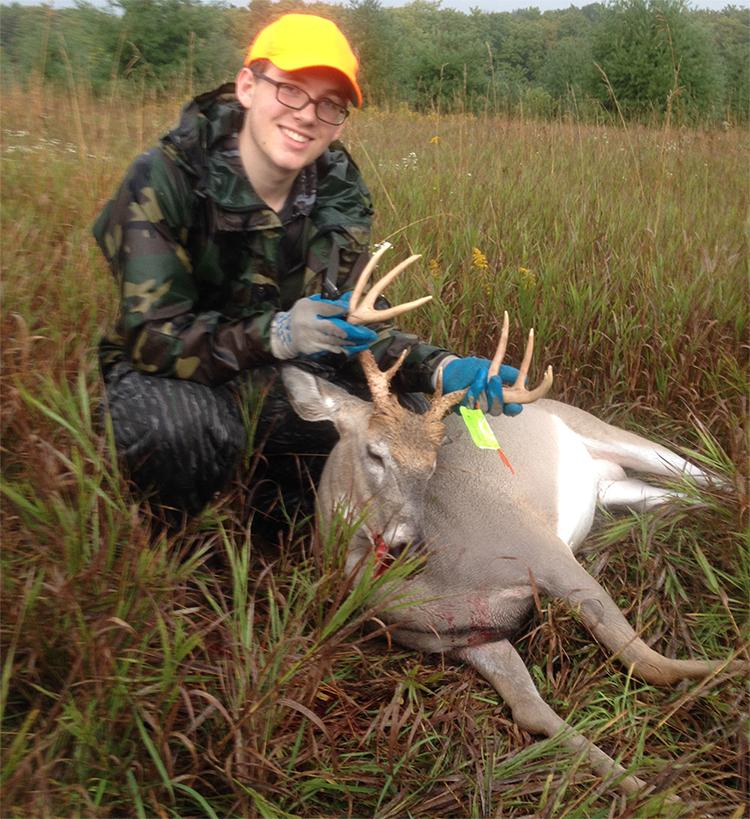 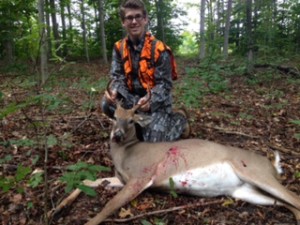 2014 was my 43rd deer season here in Michigan. I live on 20 acres in northern Mi. and have enjoyed pretty good success deer hunting here in the last 20 years. My own son does not hunt (where did I go wrong) and neither does my younger brother who lives about 40 minutes from here.

A few years ago my brother’s son John expressed an interest in deer hunting and I finally convinced him and his Dad to try the youth hunt weekend here at my place.  Because of problems with all of our schedules we had no time together prior to the Friday evening of the opening weekend.  When John arrived at my house he had limited clothing, no experience and would be borrowing one of my rifles, a Remington model 788 in .44 magnum that he had never fired before.  We spent that evening going over the rifle and as much info about deer that I could think of in that short time span.

We were seated in a ladder stand well before daylight the next morning, John whispering questions and trying to contain his excitement as we waited for what seemed like forever (to him anyway) for daylight. We were on a hardwood hillside overlooking a dry creek bed that is a natural travel route for deer coming and going to nearby crop fields.  About 40 minutes after daylight we both stood up after John whispered that his leg was falling asleep. While we stood there whispering something started thrashing around in the brush about 60 or so yards away.  We could see and hear brush moving but could not see what was causing it.  After a minute or two of this a deer suddenly trotted up the hill then stopped to look behind it. This appeared to be a small buck, but before John could find it in the scope, it trotted back down to the same spot and the thrashing started all over again. Then we saw a deer trot down into the creek bed. It stopped in a small opening and looked back again. I told John it was a buck and he should try to get a shot but because we were in separate stands in the same tree I could see it, but he couldn’t.  When the deer turned around and went back into the brush the commotion started all over again and our excitement continued to grow as we tried to imagine what was happening over there.  I thought there were probably one or more bucks sparring in that thicket, as I told John to stay ready.  Once again, a lot of commotion and rustling of brush…then it got quiet again. That’s when a bigger buck came walking out of the rush on a trail that ran on an angle up the hill behind us. As the buck got closer I whispered to John to wait until he passed a group of large trees about 40 yards away.  He was already following the deer in the scope and using the side of the tree for a rest.  When the deer stepped out behind that last tree I was surprised to hear John whistle softly.  I had told him the night before that this would usually stop a moving deer that was unalarmed long enough for a shot.  It worked perfectly as the buck stopped broadside and looked straight at us. I few seconds later John shot and I saw the bullet strike the ground behind the buck. He jumped and kicked before running and falling about 50 yards farther up the hill. Even though I had seen him fall we still waited a few minutes before climbing down and looking for blood and hair.  John followed the blood trail to his buck, a nice 8 point that any hunter, especially a first time hunter, would be proud to claim. John was excited and proud and so was I.  I might have been a little more proud than John was.

Watching the whole thing unfold was an aspect of hunting I had not experienced before and was especially rewarding to share with a young, new hunter.  I was also very pleased and impressed to see that John’s gun handling and shooting were always done with specific attention towards safety.

The following year John hunted with me again during the youth hunt and shot another nice buck…a 9 point only minutes after daylight once again.  That buck showed up in front of us without any warning and John was taken by surprise. As the deer started to move off he had to make some adjustments to get in position for a shot. He managed to get moved around without alerting the deer to our presence and then made a perfect shot as the deer stood quartering away from us.

After we had found and tagged this second buck John commented to me that his season was already over. Then he said that he must be the luckiest hunter alive to have taken two nice bucks like this two years in a row.  My only regret is that he had learned very little about what is actually involved in scouting, deer sign and behavior. This was his last youth hunt so we will see if his luck holds as he hunts during the regular firearm season next November.