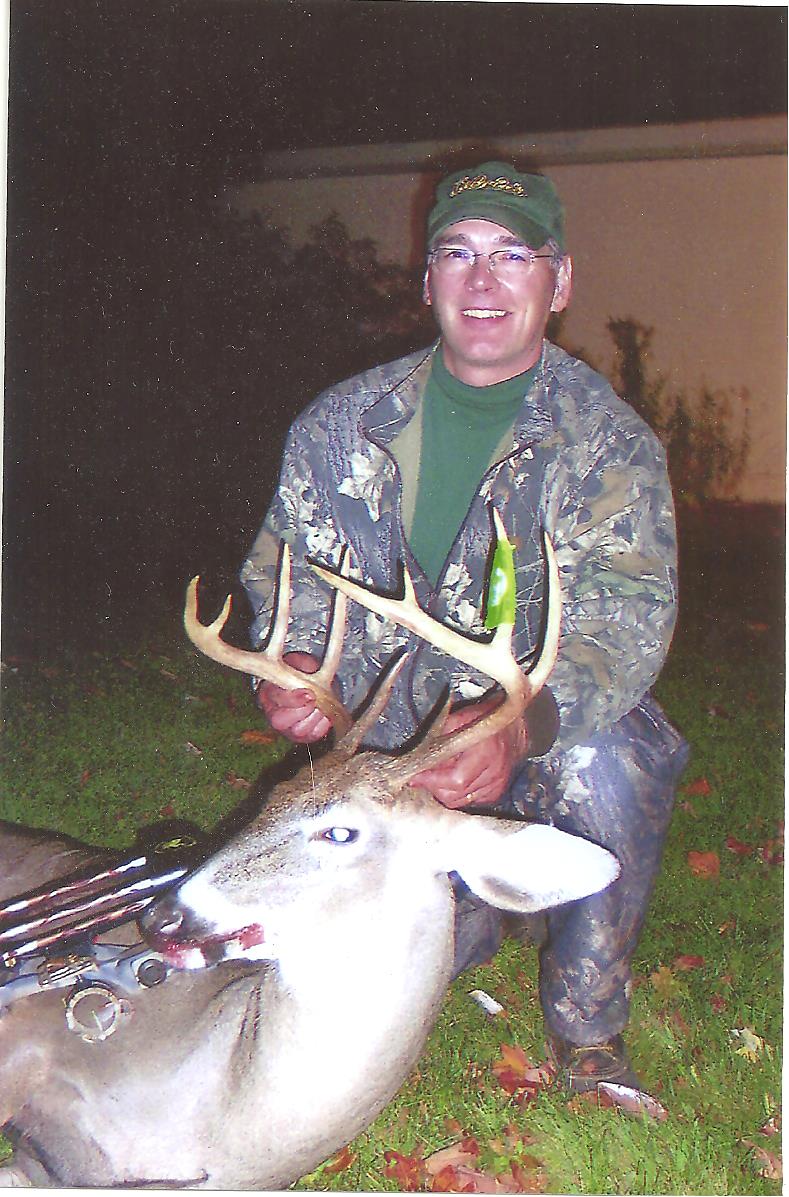 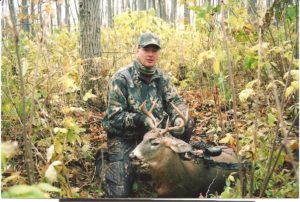 Author with a whitetail he grunted in during non-rut season

Years ago I was looking through an archery magazine and saw a photo of a very happy hunter posing with a huge buck he had taken. The caption stated that he had called it in during early bow season. I don’t recall the date but I do remember thinking that I had not heard of a grunt call working during anything but the rut & pre-rut.  Sometime later a nice buck walked by my stand in early October. It was clear he was not coming close enough for a shot. I figured I had nothing to lose and gave a couple of very light grunts on my call. To my surprise he stopped and looked my way. Three times he started to walk away but stopped when I called again. The third time I tried hard to call only loud enough that he would hear me. He suddenly started coming at a fast walk, I had to hurry to pocket the call and attach my release to the bow string. I shot him as he walked past at only about 10 yards.  I was pretty surprised when that worked out.

My theory is that a large dominant buck is likely to have an issue if he thinks a smaller buck is in his home area. I’m not sure if he thinks there is a hot doe being tended by another buck or he is just coming to see what is going on. I do know that it clearly brought a nice buck into range when he would have otherwise been only a memory.

Another time in late October or early November I climbed into a tree stand on a foggy morning and waited for daylight. This was a regular travel route with a lot of buck sign. I waited until it was full daylight even though the heavy fog still hung all the way to the ground. I did a series of 3 soft grunts and waited a few minutes then repeated the calls again. A few minutes went by and I did it again but a little louder that time. As I slid the call back into my pocket I saw movement on the edge of my little clearing. A second later a nice buck walked quickly into the clearing and marched straight at me. When he was at only 7 or 8 yards he made a sudden turn and started rubbing the bark off a willow bush below me. I had to hold at full draw for a long time but he finally turned and gave me a broadside shot.  There are a few other times when a series of grunts brought a buck hurrying my way.

In early November I was sitting in a low tree stand near the edge of an old clear cut. I had grunted a few times when I heard something walking quickly towards me. It was a decent buck and he was coming right at me. When he was at about 20 yards he caught me trying to maneuver my bow for a shot and left just as quickly. Only a few minutes later another smaller buck came cautiously walking along the same route. I ended up getting a shot at him but hit the edge of a tree, my arrow deflected off the tree and landed at his front feet. He ran about 20 yards and stopped to look back. I hit him with the second shot. One of the few times I have ever had a second bow shot at a missed buck.

Another early November morning I was sitting near a series of fresh ground scrapes. My first series of grunts brought an instant response from a small six point that was almost 100 yards away when I first saw him. He was almost running when he passed me at about 15 yards never offering a shot.

Another time I had climbed into my stand in the early afternoon of mid October when I noticed a tall skinny tree swaying about 60 or 70 yards away in an overgrown clear cut. At first I didn’t think anything of it until it occurred to me that there was almost no wind. That almost had to be a buck making a rub. I got out my call and gave a few grunts, the tree kept swaying so I called again trying to add a little more urgency to it. That stopped the tree from swaying and got me pretty fired up thinking that a buck was headed my way. It took a while but I finally saw movement in the thick brush about 30 yards away. When the buck finally stepped into the open I was a little disappointed to see that it was only a small spike. I called in another small 4 point from that same stand one evening. I could hear him moving nearby but could not see him. After a few light grunts he ended up walking almost under my tree where he stood looking around for the other deer he had heard.

The grunt call is no guarantee, I have had a lot of hunts when there was no response to my calls even when I could see a buck and was sure he could hear me. Many times that has been during the rut and those bucks were clearly headed somewhere in particular. Sometimes deer do what they want to do and no matter how well your call has worked in the past it just isn’t going to work every time. They have worked for me enough times though that I always carry one, just in case.