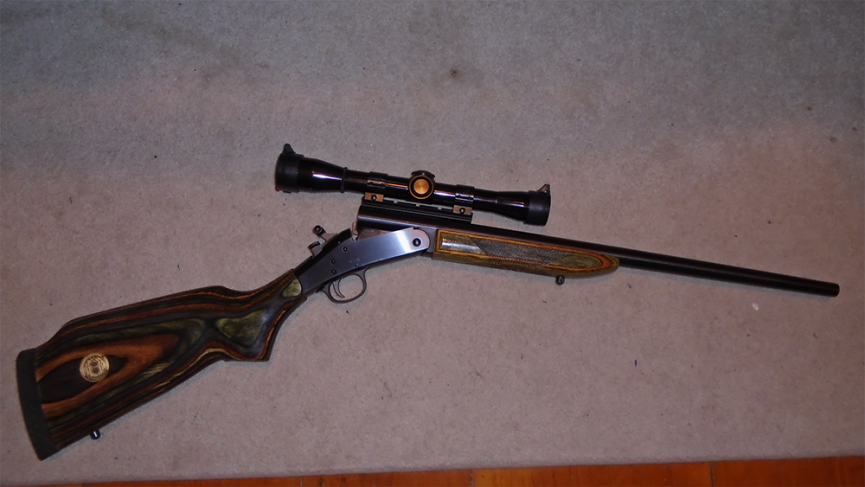 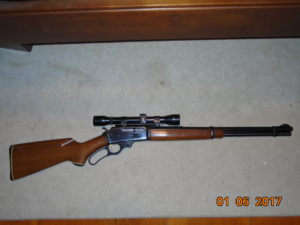 A lot has been written about deer rifles and cartridges.  There is a lot of opinion and thought about the best or most accurate or most powerful rifle/cartridge combination for whitetails. I have thought about the subject myself a lot over the years, many times while I am sitting in the deer woods not seeing any deer.
My first rifle was given to me for Christmas the year I turned 14 and I still have it, the best Christmas gift ever. It was a Marlin 336 in .35 Remington and it came with a new Weaver 4x scope. There was no safety button, just a half cock notch on the hammer and the scope was a fixed 4 power with a fine cross hair. Ammo has always been Remington 200 grain soft point. I have shot several deer with it over the years. My little brother shot his first deer, a 6 point, with it also.
When I was in my early 20’s I bought a Remington 760 pump action in 30-06 cal. That gun became and still is my favorite deer rifle. It just fits me good and I like the pump action. As far as the caliber I can’t complain about it in any way. If anything I think it is a little overpowered for my style of deer hunting. On the other hand, the purpose of a deer rifle is to cleanly kill the deer and I guess you can’t kill it “to dead.”
Over the years I have collected a few different rifles in different calibers. There was a time when I was interested in doing whatever I could to maximize my chances of taking a deer. I hunted public land for many years and there were not a lot of opportunities at a buck. Now days I am sometimes more interested in how I take a deer as much as the size of the rack. By that I mean using a bow or handgun or just a different rifle. If I know I am hunting in thick cover where shots will be close I like to use my old Marlin or a Winchester 94. I also have a single shot 45-70 that I bought for just that purpose, the swamps of the UP.
I had never given to much thought to the 30-30 cartridge until a friends son used one to take his first deer during the youth hunt. He dropped it with a single shoulder shot, the 150 grain soft point going through both shoulders and destroying the lungs. I was impressed.
This year I sat in a box blind one afternoon where shots are typically very close so I left my 30-06 at home and took my 30-30 with open Williams peep sights. A little before dark two does walked into a clearing about 30 yards away and I couldn’t pass up the chance at fresh venison. The 150 grain reload went through the back of both shoulders and split the top of the heart open before exiting. I can’t think of any other deer that went down any quicker unless it was hit in the neck or spine. The damage was more than sufficient but not excessive. If you like a caliber that works well at most Michigan ranges (under 100 yards) and is fairly cheap to shoot with light recoil then look seriously at the 30-30. There is a reason Winchester sold so many model 94 rifles. It is also a great gun for tight spaces like box or pop up blinds and is one of the nicest guns to carry. One other thought, all the ammo you could need will easily fit in the tube magazine instead of in your pocket.
Having said all that I have also used the .44 magnum in a Ruger Blackhawk revolver and a bolt action Remington 788. The .44 Magnum is another excellent medium range deer round. All of the deer I have taken with it dropped in sight from a single 240 grain soft point. The damage is less explosive than other high velocity rounds but the penetration and wound channel is more than adequate for the job. I once heard that old timers described deer shot with the 45-70 as “you can eat right up to the hole” or something similar. Meaning there was minimal bloodshot meat. The concept with the 45-70 and the .44 mag is similar, big bullet & low velocity. It shoots through whatever it hits and the bullet diameter makes for easy to follow blood trails. I have used the 45-70 to take deer and a bear. The 300 grain bullet loaded by most manufacturers seems ideal for deer. I have recovered only one bullet from the 45-70 and that was because it hit a maple sapling and then the deer. It still traveled from the shoulder to the front edge of the opposite side rear leg. It was under the hide and had mushroomed perfectly. The bear was taken using a PMC 350 grain soft point. I bought two boxes of these rounds and have not found them anywhere since, I assume they are not made anymore. The performance & penetration of this round was impressive. The bear was quartering away and the round hit him about mid rib cage and exited just in front of the opposite shoulder where it struck the bait barrel. The bear fell onto his chin before running about 40 yards. There was an easy to follow blood trail. The bullet left a big dent in the barrel next to the rim, the jacket was on the ground next to it. It appeared that the bullet and lead core separated when it struck the barrel. I will use that round again the next time I go after a bear. 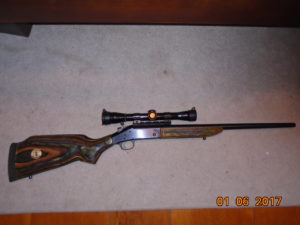 I guess I have a bit of a preference for older classic deer rifles and calibers. The old days of red and black wool and lever guns was on it’s way out about the time I started hunting. The use of bolt action and semi auto rifles was on the rise. Nothing wrong with that, like I said earlier, the goal is to convert the deer to venison and maybe if you are real lucky a nice shoulder mount.
There are tons of gun and caliber combinations out there that will work on whitetails. Pick one you like and put that round through the heart lung area and you will have your buck. The truth is that there are lots of guns and rounds that are the perfect deer gun, especially if it’s the gun you like. 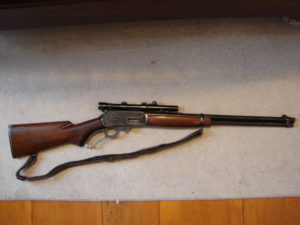 There is the classic 30-30 with either 150 or 170 grain soft point bullet. Before this smokeless powder round came out there were many different black powder rounds that hunters used and they killed a lot of game. The 30-30 was just the beginning of course. Then they came out with the .32 Winchester Special. It is only a little bit bigger in diameter than the 30-30 and velocity isn’t much different and it was also a lever action cartridge. The .35 Remington came in the lever and pump action and it shot a 200 grain soft point bullet. I guess there is an advantage to the 200 grain bullet. It seems to have the ability to penetrate a long ways but not leave the destruction of a real high velocity round. Some have said it is good for deer, bear and elk if the range is not to far, others say there are a lot better rounds, for elk especially. There was also the 300 Savage and the various other 30 & 35 caliber rounds that never really caught on. I remember an old deer hunter examining a Savage lever gun in .300 Savage. He said that when he was a kid everyone wanted a Winchester 30-30 “but man, if you had one of theses (.300 Savage) you really had something.”
If we want something with more power there are a lot of choices, everything from 24 caliber up to the 375 caliber magnums and the big bore rounds like the 45-70, 444 Marlin, 450 Marlin, not to mention the really big rounds that are typically used on African game and big bears. The trade off is recoil, expense and sometimes the issue of finding ammo as some of these calibers are not available everywhere.
If I was allowed only one gun to hunt deer here in northern Mi. it would probably be my Remington 760. The Winchester or Marlin lever action would be easy second choice picks or maybe I would start from scratch and get something completely different. Hopefully it never comes to that.
In the near future I would like to profile individual rifles and discuss some traits about them. Not to argue one over the other as an effective hunter as much as to look at the interesting qualities of each one. Now I just need to finding friends who are willing to let me handle and maybe drool a little over one of their old and not so old rifles.

Jim can be reached at:   jkushner.wgd@gmail.com