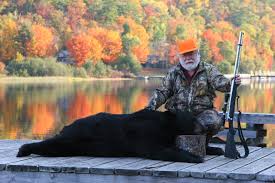 Even though there are now more black bears in parts of the UP than whitetail deer and that lopsided situation could worsen if bear license quotas are not increased significantly, the DNR does not plan on recommending any change in the number of bear licenses issued during 2016 because bear regulations are on a 2-year cycle. In other words, bear license quotas are supposed to remain the same as in 2015.

The only way to change that mindset is for concerned bear and deer hunters who want to see the fledgling Fish and Wildlife Conservation Act used the way it was intended is to bombard members of the Natural Resources Commission (NRC) with the facts. When the DNR recommended cutting UP bear license quotas last year, hunters who know better did contact the NRC to tell them that was a mistake. The NRC paid attention to some of what they heard and raised license quotas by 100 in both the Baraga and Bergland Bear Management Units, but that was not enough to make a difference.

It is essential that bear license quotas for 2016 across the UP be raised to 2011 levels to better protect the region’s sagging deer population and to better manage the Peninsula’s bears. Bears take a significant toll on whitetail fawns and they also prey on adult deer when they get the chance. An adult doe that was radio collared as part of the fawn survival study in the UP was killed by a bear and there are a number of YouTube videos that show black bears preying on adult deer, too, so it was not an isolated incident.

Black bears are at their highest levels in years and they are continuing to increase. Besides preying on deer, bruins can cause many other problems, including crop damage and attacking people. During recent years, there has been an average of one bear attack per year in Michigan. That number could rise with the presence of more bears, especially during a year with poor natural foods.

Most importantly, we now know that it was not necessary to reduce bear license quotas from 2012 through 2015 due to concerns about a declining bear population. The latest bear population estimates from the DNR show that the information they had during 2012, showing bear numbers were declining, was inaccurate. At the time, it was better to be safe rather than sorry, and reduce bear license quotas. Since the latest information clearly shows bears have been increasing rapidly, it is time to go back to 2011 license quotas.

A total of 11,745 state issued bear licenses were available during both 2010 and 2011 compared to the 6,951 that were issued in 2015; a difference of 4,794. With a growing bear population and significant reduction in bear licenses, it should be no surprise that bear hunter success rates have been increasing. The DNR and bear hunting organizations have been trying to reduce hunter success by dropping license numbers. There’s no way that’s going to work with a growing bear population.

The only way to reduce hunter success is to issue more bear licenses. That will also increase the bear harvest, but there are currently enough bears in the state that that won’t be a problem. After all, hunters registered more than 2,000 bears each year between 2000 and 2011 with no negative effects. In fact, bruins were best managed during that decade.

Bear license quotas of 11,745 in 2011 were not achieved overnight either. Michigan’s current management system involving bear management units (BMUs) and license quotas started during 1990. Only 4,191 bear tags were available that year and the harvest was a measly 723 bears. This system was established to allow bears to increase and they did. As bears increased, permit quotas were gradually increased. By 2000, 9,490 bear licenses were issued. That’s the first year the kill exceeded 2,000 (2,011).

Even with annual harvests of more than 2,000 bears, the bear population was still increasing, but at a slower rate than previously. When licenses were dramatically reduced in 2012, even though we now know that wasn’t necessary, the population increase accelerated. There are now more black bears present in Michigan than most people realize.

The DNR’s latest statewide bear population estimate, which was revealed by DNR bear specialist Kevin Swanson at a Bear Forum Meeting in St. Ignace on December 9, is for bears that are at least 1 ¾ years old as of September 1, 2014. Using a population reconstruction computer model that takes into account annual bear harvests and hunting effort, the DNR calculated that there were 10,754 bruins in the state as of that date; 8,721 in the UP and 2,033 for the Lower Peninsula (LP).

Swanson said the UP bear population has been fairly stable since 2000 in spite of the high harvests between 2000 and 2011.

That amounts to a difference of 785 bears over that 14-year period. Most importantly, the current population reconstruction of UP bears shows there was no major decline in bear numbers like previously thought. Swanson said that, based on recent data, it was not necessary to reduce bear license quotas in 2012 to prevent an overharvest of bruins.

Some bear hunters have incorrectly labeled bear harvests the last few years as overharvests because more bears were taken by hunters than the “desired harvest.” The desired harvest is a prediction by the DNR for each BMU based on previous success and license quotas. Calculation of desired harvests are subject to error, of course, if bear populations are higher than expected, resulting in increased hunting success. So even though license numbers have been reduced, the presence of more bears have resulted in higher success and the harvest of more bears.

For 2015, for instance, bear licenses were reduced by 900 from 7,831 in 2014 to 6,951, but the bear harvest increased by 12%. The desired harvest simply represents the difficulty of predicting the kill if you don’t have accurate information to start with. The predicted harvest was simply off the mark. Bears were not overharvested. In order for bears to be overharvested, enough bruins would have to be killed to reduce the population.

Swanson said that hunters can harvest far more bears each year than have been taken since 2012, and the population would continue to increase. That was proven between 2000 and 2011 when hunters bagged far more than 2,000 bruins every year.

Some hound hunters that are members of the Bear Forum blame increased technology for higher bear harvests instead of the presence of more bears. That may be the case with technology heavy hound hunting during which hunters now use GPS collars on their dogs, so they can monitor the location of each hound on the screen of receivers. Hound hunting groups routinely communicate with radios and they use trail cameras to decide which bears to put their dogs on.

The really good news is that the number of Michigan bears that were at least 1 ¾ years old (yearlings) and older was much higher than 11,000 on September 1, 2015 and that number will be higher still on September 1, 2016. The problem is the DNR does not yet know what those numbers are. They need the annual bear hunter survey report for 2015 before they can calculate what the population was before the season started and that won’t be available until some time in 2016.

That’s the disadvantage of using a method to estimate bear numbers, which generates numbers that are two years out of date when they are arrived at. This is why I’ve started a survey of hunters and nonhunters who use trail cameras to try to gather information on the number of live bears seen and photographed during 2015. That information can be reported by emailing mibearcount@yahoo.com or mailing information to Bear Count, 814 Clark St., Marquette, MI 49855. I asked the DNR about partnering on the survey of live bears, but they weren’t interested.

Based on common sense, what we do know is since the bear population has been increasing since 2012 when license quotas were slashed, the rate of increase should be higher in 2015 and 2016 than 2013 and 2014. So by the fall of 2016, there should be more bears in the state than there was during 2000. My guess is that the population will be significantly higher. More than high enough to go back to 2011 bear license quotas.

Not only will the bear population be better managed and UP deer will get a break from bear predation, hunters won’t have to wait as long to obtain a bear license. The number of years it now takes for hunters to be selected for a bear license with reduced license quotas has become too long, much longer than necessary.

As many hunters as possible need to bring the above information to the attention of the Natural Resources Commission. The Commission has the final say on bear license quotas for 2016. Commissioners who are on the NRC’s Fish and Wildlife Committee will play a key role in that decision. They are J. R. Richardson, Tim Nichols and Rex Schlaybaugh, Jr. The fact that the Commission raised bear license quotas over what was recommended by the DNR during 2015 is a good sign that they do listen to some input they receive from the public.

Also during 2015, the Commission made a change in UP deer hunting regulations even though they were in the second year of a 3-year cycle, making it illegal for bowhunters to shoot antlerless deer on single or combo deer licenses. That change was made to protect some does due to the UP’s low deer population. Increasing bear license quotas for 2016 will help save far more UP deer than protecting does from bowhunters.

UP bowhunters only harvested an estimated 4,291 antlerless deer during 2014. With bear numbers at an alltime high, they kill three to four times that number of fawns on an annual basis. Increasing bear licenses won’t eliminate bear predation on UP fawns, but it will certainly reduce it.

Addresses and phone numbers for NRC members are on the DNR’s website. One of the best ways to communicate with Commission members is via email. Cheryl Nelson is the Commission’s secretary. She will forward emails she receives to all members of the commission. Her email address is nelsonc@michigan.gov.