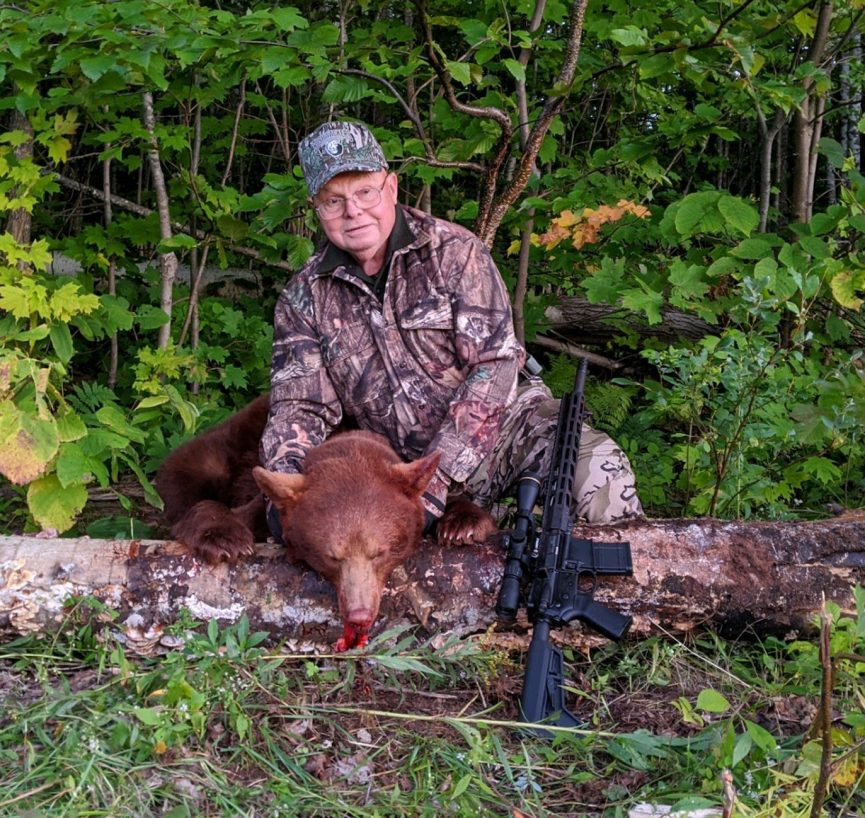 Ed Groom from Saline has always been lucky when it comes to hunting. One of the
first turkeys he bagged was a smokey gray gobbler and he got a bull moose in
Ontario with antlers that had a 58-inch spread. Then, on his first bear hunt ever in
the UP during 2020, he shot a black bear with a red coat while hunting with guides
Susie and Roy Little.
Almost all bears in the state are black in color, but there is an occasional bruin that
turns up on which the hair is a different color such as cinnamon, dark brown, blonde
or red. Color phase bears are rare in Michigan, but they may be increasing. A second
color phase bear was also tagged in the western UP during 2020.
Color phase bears have been captured on game cameras in Houghton County each
year from 2017 through 2020 during DNR research projects. A blonde cub on the
back of its black mother was photographed during 2017. A larger blonde bear was
photographed during 2018. An adult that was cinnamon in color was captured on
camera during 2019 and a larger adult male that was dark brown in color was
caught on camera during 2020.
After accumulating eight preference points toward a bear license, Groom
successfully applied for the first hunt in the Baraga bear management unit in 2020
and hired the Littles as his guides. Susie was actually his guide.
“She told me I might have a tough choice to make about which bear to shoot,” Ed
said. “The bait they put me on to hunt had a color phase bear and a bigger animal
that was black in color.”
Bear season started on September 9 in the that year.
“I hunted from a ground blind that was 25 yards from the bait,” Groom said. “My
guide told me most of the bear activity at that bait was during the afternoon and
evening, so I didn’t start hunting until the afternoon. I didn’t see any bears that first
day.
“When I checked the game camera the next day, I found out that the big black came
to the bait one minute after I left.”
The second day of the season, Ed shot the color phase bear. It showed up about 3:30
p.m.
“I made up my mind that I was going to shoot the first bear I saw,” Groom explained.
“The red bear came out at an angle from behind me to go to the bait and was only 10
yards away when it crossed in front of the blind. When I shot, it went straight up in
the air, landed on its back, rolled and ran 10 yards.”

Ed shot the bear with a Ruger .450 Bushmaster.
“When the sun hits the hair on that bear, it looks like the reddist red-head you’ve
ever seen,” he said.
The female had an estimated weight of 200 pounds and was shot in Houghton
County. Ed is having a full mount done of the bear. The second color phase bear
taken by a hunter in the UP during 2020 was also shot in the Baraga BMU. That
bruin was an adult male taken with the help of hounds on the last day of the 2020
bear season.