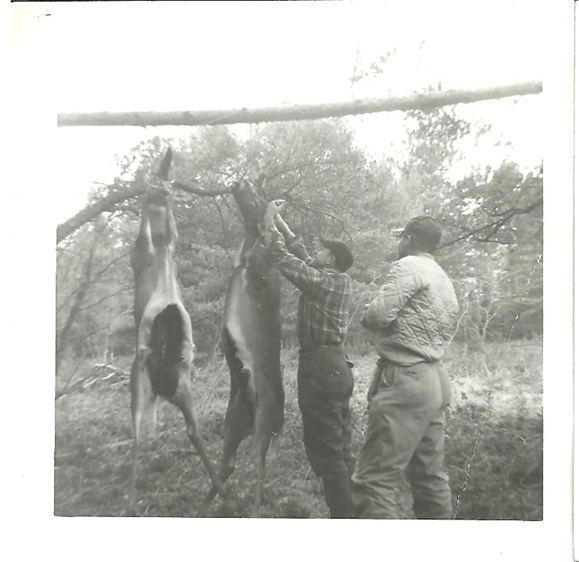 It was a long time ago but as a little kid I remember my Dad coming home from deer camp dressed in a pair of red & black wool pants, a black leather belt with a Marbles knife and a short section of rope on it. It was always a big deal to touch his week long beard, being a career firefighter this was the only time Dad was not clean shaven.

Deer camp was an old camper trailer hauled to a section of State land with the family station wagon. Dad and his brothers purchased the trailer shortly after they returned from the military Dad having served in the Korean war. It was obvious to me even then that deer camp was always a big deal…and I wanted nothing more than to be included in the excitement. 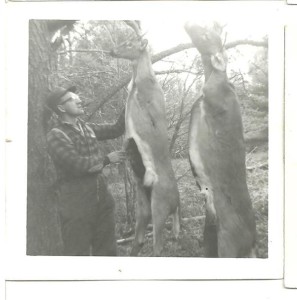 Back then you had to be 14 years old before you could hunt deer and I guess knowing that I had to wait all those years had something to do with my fascination. Family vacations in those days were always spent camping somewhere in northern Michigan and whenever a deer was spotted it was always a big deal.

The Christmas before I turned 14 I received a Marlin lever action rifle with a 4x Weaver scope.  (yes I still have it) As great as that was in a way it just added to the anticipation of a deer season that was many months away.

My first week in deer camp started with a long drive on November 13th with my Dad and older brother. We would have one day to do some quick scouting and then were up well before daylight on opening day.

There were no box blinds or pop up’s and there was no baiting or electric socks, there was no blaze orange either. There was a hand warmer that looked like a large cigarette lighter in a red felt bag. It burned for several hours on lighter fluid and it did help to keep a kids hands warm during those long hours sitting on a log or fold up camp chair.

My first year I dressed in an extra large pair of red coveralls with layers of flannel shirts and wool socks and even though I do not remember it being terribly cold that year I know I was still cold every day. A lack of deer sightings didn’t help to much either.

Dad would park me somewhere with the instruction to sit until he came back for me, if you see a deer with antlers as long as it’s ears it’s a legal buck, aim just behind the shoulder and shoot, preferably when it is broadside. There were no antler restrictions and no thoughts of the trophy hunting we see on tv today. We hunted one week of the year and any buck was a trophy. 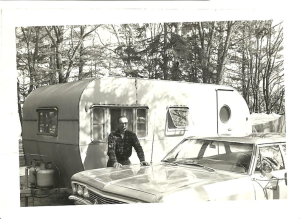 The old trailer had a couple of sets of antlers hanging on the walls and the evenings after supper were spent reliving the stories of how the big ten point was taken or how another big buck was missed by someone. After a couple of years I noticed that the stories changed a little depending on who was doing the story telling but we always looked forward to them year after year.

This was also the place where I learned some pretty classic terms associated exclusively to deer camp. “Daylight in the swamp” was always shouted by someone a good two hours before the sun was even close to brightening the horizon in the east. It took a while before my 14 year old mind figured out why they did that, didn’t it seem to get light in the swamp later than just about everywhere else ? Then there was the friendly harassment of anyone who shot a small buck. They all would have shot a legal spike but that didn’t stop them from using the “near deer” term to describe this poor specimen as they placed it on the buck pole and every night thereafter as everyone related the stories of the day.

Occasionally someone would say, “be quiet, I think I can hear his momma calling him” yes that one seems especially cruel but the reality was that guy was usually the one with a smile on his face as they drove home at the end of the week. Any buck was a good buck. One of my cousins hunted for several years before ever seeing a buck and when he finally did it turned out to be a single antlered spike. That didn’t lessen his happiness but it sure made him the target of many “near deer” type jokes. His brother suggested he now had a hat or coat hook for the wall.  A friend of his was there hunting with us and the day he left they tied that little buck to the front of his VW Beetle, the last thing he said when he drove away was, everyone is going to say “look, Mike hit a dog !”

I learned how to use a compass that first year and I learned about sitting downwind of where I thought a deer may come from and what a buck rub and scrape looked like. Other than Michigan Outdoors and the classic Outdoor Life magazines none of that stuff readily available. It just wasn’t on TV like it is now. Trail camera, what is that? They would not be invented for many years. 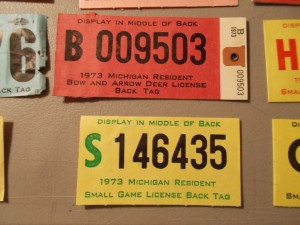 2015 was my 42nd firearm deer season here in northern Michigan. I saw only four deer and didn’t fire a shot. I have an antlerless tag but decided that the one deer I tagged during bow season would probably be enough meat in the freezer so I waited hoping for a buck. The muzzleloader season is not quite over and there is still the rest of the December bow season so I am not quite done hunting. My Dad is in his 80’s and still hunts every year. Like him I am already thinking about next year.

“Daylight in the swamp”