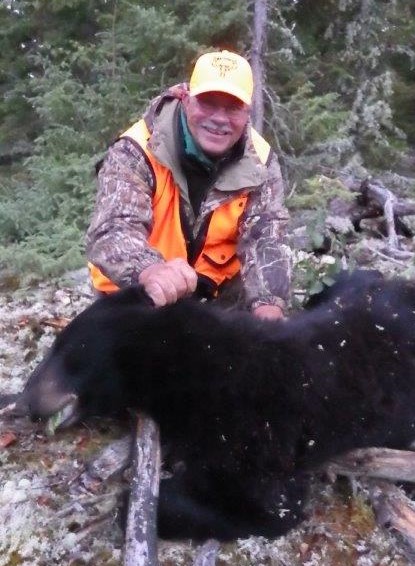 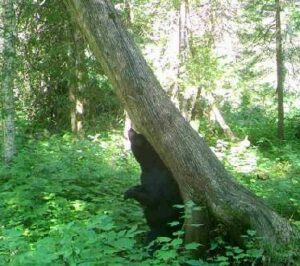 The black bear is a very adaptable critter and can be found in a wide variety of habitats. Its range goes from Canada, south to northern Mexico, and is found throughout the United Sates, with the only exception being Hawaii, which has no bears. Michigan has a steadily growing number of black bears with over 11,000 in the Upper Peninsula and around 3,000 in the northern Lower Peninsula, where the range is steadily creeping south. A black bear was recently captured in Grand Rapids and taken back up north and released.

Typically, transient bears which move that far south (some have even reached Indiana) are young males doing what I would call a “walk about”, and seeking out possible new territories. Cubs are born in a den during the winter and will stay with their mother and den up with her again the following winter, but she will give them the boot in the spring, to go and be on their own. The young bears must then seek out their own territories, and young males, especially, can be pressured by territorial older males to “get out of Dodge”. I know there have been a number of black bear sightings documented in my Thumb area, but to my knowledge they never stuck around, and eventually worked their way back up north, probably because they weren’t finding any female bears.

Black bear hunting is a passion of mine, and I’ve been at it for quite a while now. My first bear hunting adventures began in Michigan’s Upper Peninsula back when you could still buy a bear license over the counter. I never considered bear hunting in Canada until the present “bear point” system came into being, and northern Ontario has been a great place to go while I accumulated my points and attempted to be drawn for a fall Michigan black bear hunt.

I have only black bear hunted over bait, and it is an extremely relaxing pastime I much enjoy. I find nothing boring at all about sitting and waiting for a bear to come into the bait, because it gives me an opportunity to observe and enjoy nature, and there is always the sense of anticipation that a bear will silently and suddenly appear at the bait, almost like magic. It is truly amazing how such a large critter can materialize without making a sound. When this happens, folks, I can attest for a fact that it is an absolutely thrilling and unforgettable moment!

The two popular methods of bear hunting in Michigan are over bait, or with the use of hounds, and I fully support both methods. I have long enjoyed hunting with hounds, and have participated in using them for rabbit, squirrel, raccoon, fox, coyote, and bobcat, but as yet, not for bear. I do wish to experience a bear hunt with hounds sometime, which is definitely on my bucket-list.

I have also yet to experience a spring bear hunt. Most Canadian provinces offer such, as well as 8 western states. Gerry Maciok of Marquette is the President of the Back Bear Bow Hunters Society, and is striving to see a spring, bait only, bear season established in Michigan. The Black Bear Bow Hunters Society, even though being a bowhunting organization, supports and represents all forms of hunting arms for ethical bear hunting over bait, which includes bows, crossbows and firearms. This Michigan group promotes and practices conservation, while educating hunters and the non-hunting public alike on all issues that pertain to the black bear. Maciok believes that a spring, bait only, bear season will ease tensions and conflicts amongst bear hunters, which are becoming all too common in recent years.

The crux of the matter is that both bears and the hounds pursuing them do not recognize any boundaries, and this fact can sometimes disrupt matters for anyone bear hunting over bait. I know a Thumb area resident who owns property in northern Michigan, and it took 11 years for him to finally draw a bear permit for the “Red Oak” District last year. When it was allowed, he began baiting bears on his northern private property and his trail-cams documented several bears using the bait-site. His bear season was in full progress when he was finally able get away from his job and go up north. Upon reviewing his trail-cams after his arrival, he had pics of several hounds nosing around his bait-site, and never saw another bear on his property for the remainder of his bear season.

According to current MDNR surveys, about 85% of the black bears harvested annually in Michigan, are taken using bait. This obviously means the majority of bear hunters in a given year, are hunting over bait, and the minority of hunters are using hounds, which truthfully is a time-steeped method of hunting that readily can involve family and friends to come along and enjoy the hunt. Hunting with hounds can often be a group affair, and I personally consider that sort of involvement as being quality time spent sharing a very unique experience in the outdoors. However, it is quite unfortunate that bear hunting with hounds can on occasion, disrupt and even ruin the bear hunt for someone else hunting over bait.

Attempts have been made to keep bait hunters and hound hunters in separate timeframes during the fall hunts, but depending upon the particular hunt and unit, the two methods of hunting often overlap one another (I’ve been there). That is why I fully support a spring, bait-only, bear hunt which would allow an unfettered timeframe for participants.

Maciok is also a member of the Michigan Bear Forum which involves the MDNR Wildlife Division and various user groups that meet every December to discuss bear management issues, and he put the spring bear season on the table last year with a proposal for forum members to review. If agreed upon, it would be then sent as a recommendation to the Natural Resources Commission (NRC) to vote on. Logistically speaking, Maciok’s spring bear season proposal looks like this:

The application period would be January 1st to February 1st. Application results would be finalized by February 28th. Baiting would be allowed to begin April 1st. Dog training will be rolled back 2 weeks from April 15th to March 31st. The spring bear hunt begins May 1st and ends June 10th. Adjustments on tag allocations can be made the following cycle (every 2 years). The second fall hunt is shifted over 4 months in order to create the spring hunt. In this way, the MDNR and NRC will not have to allocate more tags for a spring season.

I personally believe that is a very well thought out proposal which I fully support. Only time will tell whether or not a Michigan spring bear hunt will come to fruition. Just the same, I’m saving up the bear points I’ve accumulated thus far, since my last Michigan bear hunt (in 2015), just in case. Just as with turkey hunting, I do believe it would be another splendid way to enjoy the springtime outdoors in our great state.