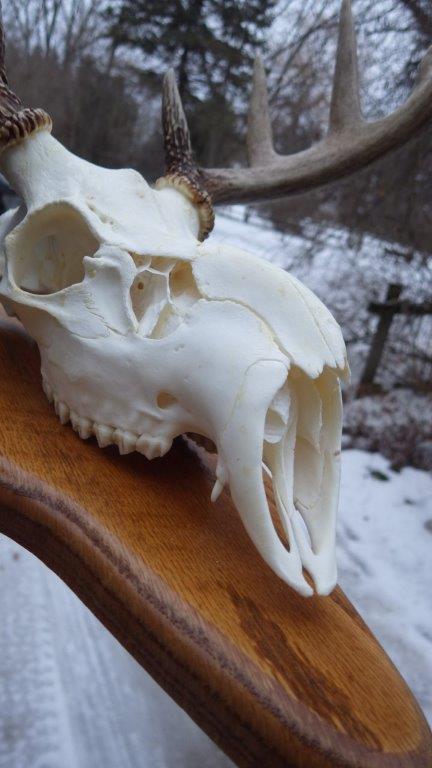 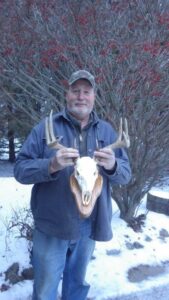 Ken Martin of Cass City truly enjoys hunting local Thumb whitetails, something he has been doing since he was a kid. Having taken his share of deer over the years, he isn’t a trophy hunter, but like many deer hunters, he always has his eye out for the “big one”. Little did he know when he went to his hunting blind on the second morning of the 2020 Michigan Firearms deer Season, he would soon encounter a dandy buck, and actually a real trophy too, in more ways than one.

Daylight was in full progress when Ken spotted what he considered a very respectable buck and ranged it at 204 yards, and readied his rifle, a scoped Savage bolt-action in .350 Legend, on steady rest. He had heard some good reports on the new .350 Legend round, featuring a very mild recoil, relatively flat trajectory and being proven to be amazingly effective on whitetails. He had (wisely) spent enough time on the shooting range to have full confidence in his new rifle and cartridge combination, and when the crosshairs were just right, he touched the trigger.

The buck was clearly hit hard and quickly disappeared into the brush, but didn’t go far. It was definitely down for the count when Ken located and tagged it. The buck was a 9-point which featured some pretty decent mass, and was one of Ken’s biggest bucks in all his years of deer hunting, and needless to say, he was quite pleased.

About a week later, I was able to examine this buck’s head (the rest of it was at the deer processor) when Ken, who owns Martin Electric, was on hand to restore the power I had lost to my kennel and stable. The head was soon going to the taxidermist to be made into a European (skull and antlers) mount, which in many ways was quite fortuitous.

This was a dandy 9-point (in my eyes anyway) and I was certain that it was at least a 3.5 year old buck, but aging by antlers alone isn’t an accurate factor by any means. However, there was something about the head-shape I found unusual, especially the very distinct “Roman” nose, which can be indicative of older bucks. I asked Ken to be sure to have the taxidermist save the lower jaw for accurate aging (which is typically discarded per a European mount), because I was real curious about this buck’s actual age.

A couple weeks later, Ken stopped by to show me his new European mount, and had called ahead to let me know I was in for a surprise, because the 9-point had “fangs”. It sure enough did, almost an inch long, and I made a point of photographing the skull from various angles, because it wasn’t your normal deer skull by any means.

The unique skull structure featured a raised, very arched and curved nature from the just below the eyes to the end of the nose. The buck had obviously been a scrapper, because the nose had clearly been broken and healed in the past, but in my opinion, the whole structure appeared to be au natural, in that the “deformity” was most likely due to ancient-related genetics, or even a birth defect. The lower jaw, which had been saved, would be officially aged at 3.5 years old. However, the lower jaw was also quite undersized, which adds more to the puzzle. None of this affected the buck’s wellbeing, because otherwise, it had been a very healthy deer (with a dressed weight of 170 pounds – which is actually a heavyweight, especially in the middle of an ongoing rut when bucks can run off a lot of weight).

I had heard about whitetail bucks on occasion having “fangs” (and being commonly referred to as “vampire bucks”), but this was the first one I have ever personally observed and had a chance to study. Although considered a rare occurrence, it certainly isn’t unheard of, and is typically found on only male whitetails. “Vampire” bucks are usually discovered only when the head is being caped out, because seeing any fangs isn’t expected or typically even looked for. I recently talked to a MDNR Wildlife Biologist who, in his 30 years of experience at aging literally thousands of deer, has found fangs on a buck only once. But he also admits, his main focus has always been at the back of the lower jaw, and is how deer are properly aged, and not the front of the upper jaw. Fangs found on whitetail bucks usually don’t exceed one inch, so they aren’t protruding out at all.

The whitetail deer genetics go back eons and are actually related to Asian deer, of which the males of some species still have very visible fangs that are literally used in territorial fighting with other males. The Chinese water deer and musk deer males have fangs, but no antlers, but the male muntjac deer has both fangs and antlers. The skull structure/profile of Ken Martin’s vampire buck sort of reminds me of the skull structure/profile found on a muntjac buck, and that makes me think (in my humble opinion) it is more a case of “throwback” genetics, which include the fangs, than a deformity of some sort. As I mentioned earlier, I believe this buck was a bit of a “scrapper”, and I can only wonder if he instinctively knew, like his ancient ancestors, to use his fangs for biting an opponent. They certainly could have served the purpose (if you got ‘em in a serious tussle, use ‘em)!

I would like to state here that I don’t consider a “throwback” as being a derogatory term in any way at all, but instead, as being very unique. I once had a person call me an outrageous “Neanderthal” due to my pro-hunting attitude (and quite possibly my physical stature too) and, well, folks, I actually took that as a great compliment.

Those primitive hunters sure knew how to successfully hunt some pretty impressive and often very dangerous big game animals in order to survive, using very limited resources and hunting tools. Although not all that handsome, they were quite physically fit and tough enough to readily deal with their rugged and very challenging environment. Nope, folks, I don’t mind being called a Neanderthal at all!

Ken Martin certainly bagged a very unique trophy buck of a lifetime, because vampire bucks sure don’t grow on trees. I’ve bagged my share of whitetail bucks over the years, but never a vampire buck, at least to the best of my knowledge, because I don’t recollect ever checking for any fangs.

From here on out, however, that is for sure going to change!