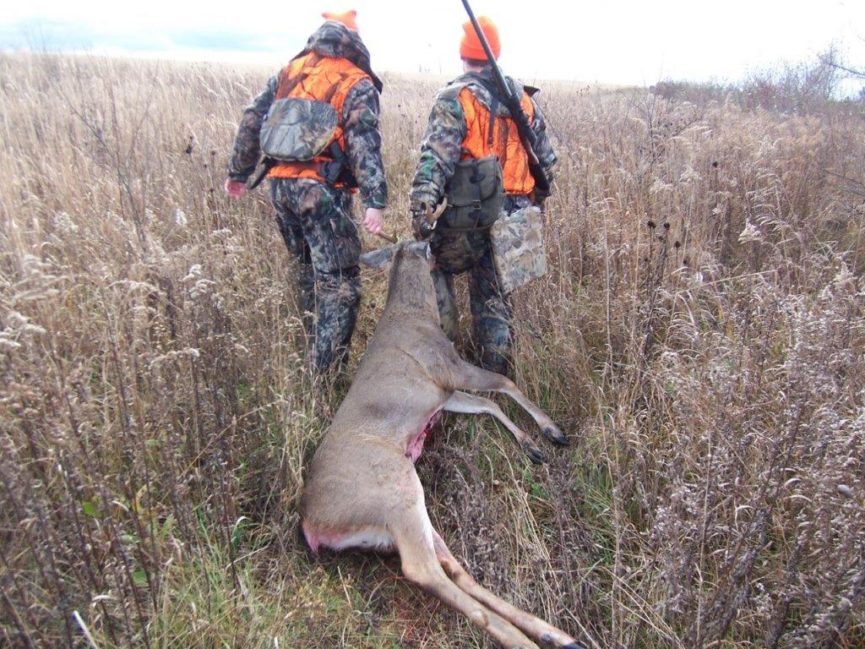 Here in the agriculture-rich Thumb, it is pretty easy to say our local whitetails can be considered as being “farm-fed”. For a fact the deer in these parts feed pretty good, which means their venison is of the highest quality when everything is properly done from the field to the table. Good venison has a very succulent nature to it and it is a primary meat source for my family which we all enjoy.

I was a state meat inspector for almost 12 years, working on various “kill-floors” in slaughterhouses, where I did ante-mortem (making sure animals to be slaughtered were in a healthy state) and post-mortem (performing an autopsy of sorts) inspections to assure healthy animals during the butchering process. A major part of my duties was also assuring everything was done in a sanitary and proper manner, and when a finished carcass went into the cooler, it didn’t get the stamp of approval unless it was something I would eat myself, a personal code I stuck to. Needless to say, folks, I have a complete grasp of where meat presented under glass truly comes from, start to finish.

Many of the slaughterhouses I dealt with also processed deer during the hunting seasons, and this gave me a firsthand view of the quality of field care deer carcasses had received, especially in regards to field-dressing (aka “gutting”) and cleanliness, and bringing matters in a timely manner before spoilage. The majority of the examples arrived in proper form but there were enough examples that were in such a deplorable condition, to say the least, that the successful hunter obviously had no clue of how to properly handle matters. The end result is often a “gamey” flavor, and in my opinion there is no such thing with properly handled procedures, from the field, to processing the meat, and on to the table.

You might assume I seem a bit callous in regards to killing and taking care of matters, but the fact is I’m a realist and a hunter to the core of my being. I will however, try to sanitize matters as much as I can, but I’m going to cover how I do matters, from start to finish (I’ve actually had some meat processors ask me to do this).

First at the get go is to fully understand the anatomy of a deer and know where to aim to properly kill the animal as quickly as possible. Sometimes the deer drops on the spot, but often they do not, and this is where knowing how to follow up on blood-trails and other sign pays dividends. It is also wise (and ethical) to be completely intimate with the chosen hunting arm and know its strengths and its limitations which are strictly adhered to.

Once the downed deer has been located, do not automatically assume it is dead and always approach in a cautious manner, from the rear of the deer with it facing away and keep a focus on its eyes that if the deer is dead, will be fixed wide open. If the eyes are closed, immediately shoot the deer again, and I tend to go for the ribcage, center mass, which is the biggest target (with arrow or bullet) and this will speed matters without wasting meat. Only when I clarify by the eyes do I give the downed deer a “boot” to double-check, and not checking the eyes first might cause a simple boot to become a literal kick-start to losing a supposedly dead deer which suddenly comes up like a jack in the box.

I always get the willies when I watch outdoor shows where a successful hunter walks right up to a downed deer and grabs it by the antlers, obviously making assumptions. Deer have the capability to defend themselves, and in the real world, they have every right to. A case in point happened to me some 30 years ago when a big buck came loping up to me in heavy cover and I dropped him just a few yards away with a shoulder-shot using a 12 ga slug. The mature 9-point dropped on the spot, but clearly looked right at me and immediately came for me even though he could only get his rear end up, and he moved fast. His nose was almost to my toes when I spine-shot him between the shoulder blades.  I’ve always fully respected that buck’s actions.

The first thing in order for a dead deer before all else, is to properly tag it. I use plastic zip-ties because they are quick, easy and stay secure. I then roll the deer on its back, and whenever possible, with the front positioned uphill to allow any blood drainage to go downhill, away from the project. I also believe the shoulder-length plastic gloves are a true blessing in keeping hands/arms and clothing clean. In the “old days” I simply rolled up my sleeves and went to work. Then came the buck that had obviously bedded in poison ivy and I paid my dues, and I’ve been donning plastic gloves ever since.

Now will come the reality folks. Always start with a sharp knife blade, as a dull blade can hurt you because it requires extra effort, and it doesn’t have to be a big blade, because I’ve dressed out plenty of deer with a simple pocketknife. If a male deer, I start with cutting back the male organ and testicles and keep all connected and leave them attached when I core out the anus. If a female deer, I first remove the udder in the event it contains milk, and I don’t want milk leaking all over. I then core out the female organ with the anus. All remains connected to eventually pull forward through the pelvic area with care being taken not to break the bladder (which appears as a small balloon near the pelvis and I never cut the bladder off as doing so will always leak urine – so everything stays connected as a single unit).

Once the anus and other organs are cored out, I open the body cavity up from the pelvis forward to the ribcage, and care must be taken not to nick intestines or the paunch (a sharp gut-hooks work great, otherwise do this with the knife blade edge pointed up and fingers on each side as a guide and holding entrails back). If it is a trophy that I wish to cape out, I stop there and reach in to cut the esophagus as far up into the neck as possible (this is where shoulder-length plastic gloves pay dividends). If not a trophy, I slice through the hide to the brisket bone and then employ a small saw (I have a Swiss Army knife which offers all I need) to saw the brisket bone, all the way from back to front. This will allow easier access in removing the heart and lungs, and I use the esophagus as good handle for a firm grip while I work the knife blade between lungs and spine, but often steady pressure will bring it all out with little cutting, and I set heart and lungs, still connected, to hang outside the body cavity.

I then go to the back and saw the pelvic bone apart, which allows easier removal of anus and sex organs, and with bladder still attached, and I set them outside of the body cavity, followed by pulling the intestines and paunch out. Everything should then be lying outside as a still connected unit and thus without contaminating the inner carcass. I then roll the deer over to drain any blood and clots, and this is where having the front of the carcass facing uphill pays off.

Typically, if one is available, I prefer to use a plastic toboggan to drag my deer out as it slides easier and keeps matters clean. Otherwise I make sure the deer is on its side while dragging to avoid getting dirt and debris into the body cavity. Once I get to a source, I prefer to lightly rinse out the body cavity with clean, cold water which removes any blood and aids the cooling process. A pressure hose isn’t necessary and can actually drive contaminates into the flesh. Anything I don’t like, I trim away instead of “washing” it off. The last thing you want to do is force wash contaminates into the flesh, as it may look good, but isn’t.

There is an ongoing debate as to whether hang a deer head-up or head-down. Some believe hanging the deer head-up allows blood to drain down into the hindquarters. Actually, the dead deer is minus a pumping heart, so any blood flow has stopped, gravity aside, and I hang my deer head-up to allow better drainage (from the rinse job) and to air dry, which allows further cooling. I’ve never had bad venison as a result (after many years) of hanging deer head-up, but I don’t argue with those convinced otherwise. It is whatever floats folks’ boats. I also leave the hide on to keep the outer carcass clean until processing.

If temperatures are cool enough, I often hang the deer and allow it to thoroughly chill. If not cool enough and flies are out and about, I take the deer immediately to the meat processor and a cooler. Aging meat is actually a science, and if you don’t understand it or the required, continual temperatures, it is best to simply have the deer processed as soon as possible.

Well, folks, that is how I do matters in a nutshell. Happy and safe deer hunting!