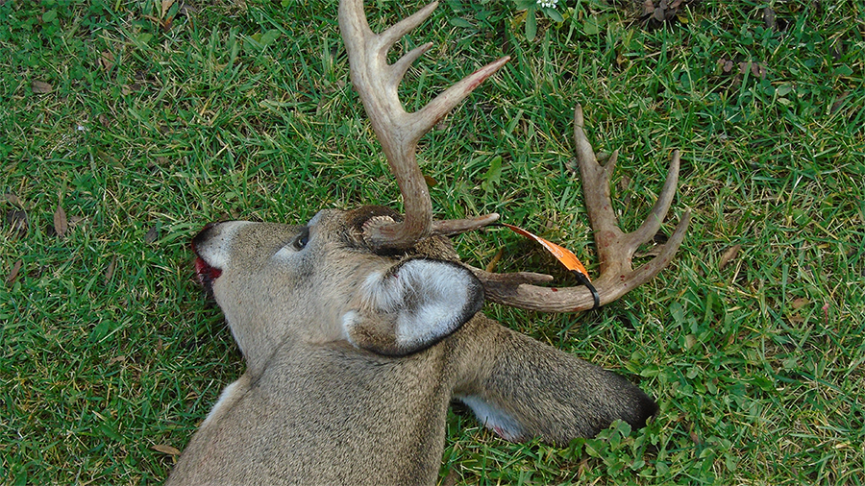 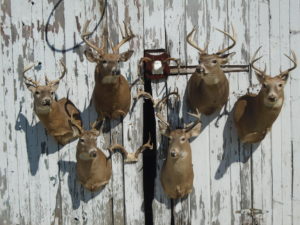 I stopped shooting 4 & 6 point bucks & started shooting 8 & 10 point bucks. I also started seeing fewer deer than when I was baiting. That was one of the hardest things I had to get used to but eventually I became convinced that I just wasn’t going to have success with bigger bucks as long as I was continually seeing and spooking the same groups of young deer.

I do have the advantage of having lived and hunted the same piece of property for more than 20 years. Even though I have only about 15 acres of huntable woods I have learned the deer travel patterns and found that they are pretty consistent from year to year. The biggest downfall of hunting small pieces of property exclusively is that you only have a certain number of options for stand sites and the wind always dictates when you should or should not sit one or the other. I am convinced that any deer that has been around for very long will almost always approach a baited stand from downwind.

When I decided to stop baiting and just hunt travel routes I missed seeing deer on a daily basis but I also noticed that the deer I did see were usually very calm and they usually had no idea I was there. I always try to hunt from a tree stand and since the deer seem to move fairly consistently from year to year I regularly use the same tree(s).

The real turning point for me was one year when I had a number of nice bucks on camera at a bait site. They were even visiting that spot during the middle of the day. After a few days of hunting there I realized the majority of the deer were circling downwind from the stand and that was why I was not seeing those nice bucks that were on my camera. Pretty soon the only pictures I had were of does, fawns and young bucks.

I decided to set up on the ground about 100 yards downwind of the baited stand just to see what was going on. That first night I saw a big doe and her two fawns, they were clearly circling downwind of the bait before heading in to it. Just before dark that same night I saw another deer, I could not see its head but it was a big bodied deer & it was moving away from the bait. What I also noticed was that all of those deer passed within easy bow range of a large cluster of maple & ash trees. A couple of days later I snuck in there as quietly as I could and put a stand in those trees. I didn’t hunt it until 5 or 6 days later. 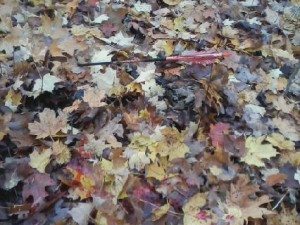 On the first evening I hunted that stand an hour and a half before dark I saw a nice buck headed slowly my way. I shot that 9 point at less than 20 yards. When he fell within sight of the stand I decided I was done with hauling bait.

That is the same stand my nephew shot his first deer from, an 8 point. As I write this there is a 10 point hanging in my barn, arrowed at 13 yards from the same stand. There is another 10 point on the wall that I arrowed from a stand only 30 or 40 yards from there. My Dad’s biggest buck as well as several others were all shot in that same general area during the gun season. Last year I shot two nice bucks on opening day of the gun season as they moved along another travel route on that same small piece of woods.

I know of several people who have taken nice bucks over bait and I know of some hunters who hunt the same stands year after year, lugging bait in regularly. They have the occasional nice buck on camera but rarely do they ever see those deer. One guy was so hung up on his baited stand that he refused to hunt a spot where there were many more deer, just no box blinds or bait piles.

Having said that. Deer hunting is supposed to be fun, hunt any way you want as long as it’s legal and you enjoy yourself. I will never give up my deer rifle but bow & arrow will always be my favorite way to hunt. There has always been something very exciting about having a deer, any deer within spitting distance of you and never even knowing you are there.

A quick tip, don’t be afraid to try new things or maybe even some old things. What works for one guy will work for you, what didn’t work last year may just be the trick this year. The 10 point I shot this morning had his head down when I shot. His nose was in a mock scrape I had made a few days before. I have tried mock scrapes before but never noticed any results, I tried it again after recently reading a magazine article where the author said ha always makes them under his stand. He stated he did nothing more than scrape up the dirt with his boot, there is now something for any buck approaching your stand to be looking at ( instead of you) and the scent of fresh dirt in the air doesn’t hurt either. It never worked for me, until it did this morning.