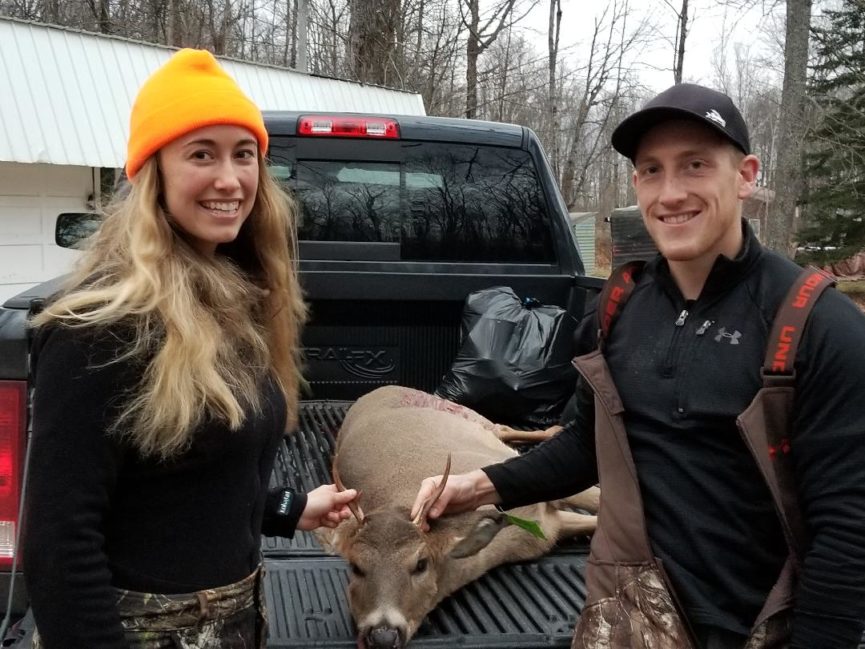 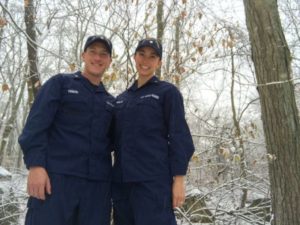 You May Recognize These Two From The Cover Pic. Ryan & Nicole Are Both Serving In The US Coast Guard. “Thanks for your service”!

In my opinion it’s really about the enjoyment of hunting and what really makes it fun for you, not what someone else thinks is fun. In my younger days just seeing a deer while hunting was heart pounding excitement for me. I wanted a buck so bad I could taste it, but my opportunities were few and when they did come I usually messed up ! There were a lot of reasons for that but the lack of success only increased my enthusiasm and drove me to try harder.

As the years went by and my success increased I started to raise the bar so to speak on I would consider harvesting.  I also found more & more that I wanted to try something different occasionally to keep things interesting. I think about the guys who backpack miles into the Adirondacks and sleep in a tent for a week. In sometimes downright miserable conditions they still have a real good time and go back year after year even with a very low success rate. I used to do a tent camp in the UP with two friends, with the right gear we stayed comfortable and had a great time even though we took very few deer. It seems like the harder the conditions or the method used the lower the bar when it comes to success. 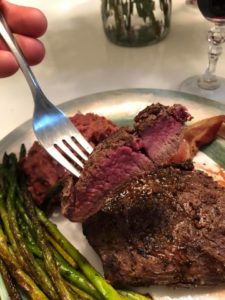 Photo courtesy of Ryan and Nicole…an obvious benefit and sometimes ‘the reason’ some folks hunt.

Before the compound bow and now the crossbow, archery success was very low yet there are still bow hunters who use traditional equipment and keep hunting. For them taking a nice buck is a thing to be proud of, as it should be. When I first started bow hunting the compound didn’t exist and I regularly heard that any deer taken with a bow was a good deer. Reading some of the many hunting related forums out there it’s easy to see that success isn’t measured as much by antler size as it is by the hunt itself. 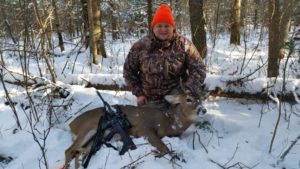 WGD Hunter Posing With His UP Whitetail Taken With A Rifle He Personally Assembled.

A friend who got started hunting late in life set the bar at bucks only and he only hunts with a crossbow. His first buck was a year & a half old 6 point. He was so excited at getting that buck he couldn’t stand still for several hours. The next year he held out for a nice 8pt that was on his camera even though he only had pictures after dark. One really nasty afternoon he sat his stand and arrowed that same 8 point dropping it with a perfectly placed shot. Talking about it months later it was clear that he was still excited about that hunt but he ended the conversation by saying that he didn’t know if he was going to be able to top that one. 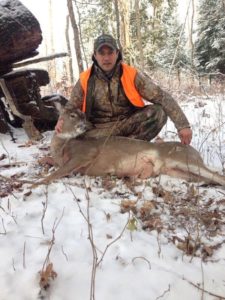 WGD hunter with a doe he harvested using his muzzle loader.

I suspect that he may try to top it and if he succeeds he will have another great memory. If he holds out a few seasons he may lower his standards a bit or find that a little different method of hunting will add to the enjoyment for him.

Sometimes hunting on your own can have some challenges that make it enjoyable other times a week in a hunting camp with a good friend or two will be worth the time spent even if no deer are taken. Some of my best memories of past hunts have been in a camp somewhere. Some of my best memories of success involved the taking of a nice buck when I was still hunting a new piece of property or maybe the shot was taken at long range or short range when only second before I was looking at nothing but trees. The sudden appearance of a deer from nowhere, realizing it’s a buck and taking the shot then just as suddenly it’s over. Or the deer runs off not giving another shot. Then there is that doubt, did I miss, I didn’t see any sign he was hurt as he bolted away. Then the feeling of excitement when you find evidence of a good hit and the tracking job that follows.

One year I had almost all of the elements described above. A new piece of woods, by myself, late season & still hunting. I knew a deer was nearby but had not seen it. Then after a long wait, on edge I got a quick glimpse of an antler with two points and most of a deer’s head. Then it was gone. More tense moments waiting and searching. Wanting to move but telling myself not to. Then suddenly he is in an opening and a quick shot before he once again is out of sight. He did that back hump and kick before running off so I was pretty sure of a hit. A scant blood trail brought in doubts about where he was hit. Careful tracking thinking it was going to start raining any minute and then I see him laying on his side just ahead. An even better feeling when I lift his head and find he is much bigger than I originally thought, a 9 pt. The shot, it was right through the heart. 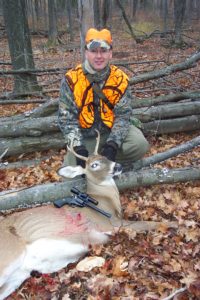 The author with a Michigan whitetail harvested with a .44 mag pistol

That was a great memory for me. I have others, taking deer with a handgun, several archery kills that fell in sight, not all bucks either. I have a couple of great memories of deer taken after a long season of both bow and gun hunting without taking a shot. Then suddenly everything comes together and all those hours sitting or sneaking through the woods is over in a few seconds and maybe it just happens to be your biggest buck ever or maybe you were joined by a family member that you have not been able to hunt with for a long time.

The bottom line and again, it’s just my humble opinion, is that the size of the rack should not be the only measure of success. It is however a very good reason to gloat a little when ever you get together with some good hunting friends. Hunt hard, hunt safe but most of all hunt because you enjoy it and use whatever (legal) method increases that enjoyment.  BTW…enjoy your venison table-fare!