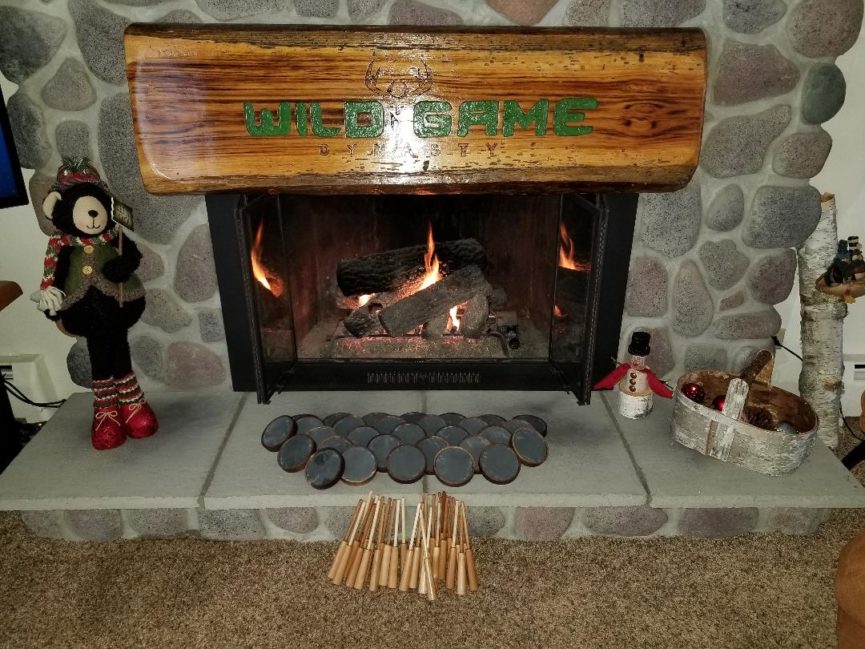 The summer after Gary first purchased his place at East Lake I helped him out with some demo & remodel.   The “priority project” was removing a really old tub & toilet and replacing with new plumbing and shower stall.   The old pipe was black metal and came apart (more or less) in our hands. Seriously, it was as old as it was ugly!

My friend, Matt,  also helped out with the project.   When fall rolled around we planned a 4 day hunt with Gary. I believe we were the first to actually hunt at Wild Game Dynasty (formerly ELO).   For me that turned out to have a special meaning.   For about a year and a half prior to that summer I had been fighting a serious illness and recovery was pretty long. While I could get around ok I wasn’t doing any long hikes or heavy lifting.

This trip may have been the last time I hunted over bait…not that it really matters.  Matt & I had scouted some spots with help and guidance from Gary. I had hunted that area before so I had a general idea what to look for & where to go. My stand site was on a slight ridge overlooking a spot of low ground with tall grass & tags. There was a natural shooting lane and with some minor trimming and brushing in my pop up I felt pretty confident in the blind.  We baited a few times before season opened and although I did not set up a trail camera,  I was happy to see the bait was being eaten and numerous deer tracks in the soft, wet ground.

Opening day arrived.   The three of us got into our blinds well before daylight.  Daybreak turned  into mid morning  as the wind was picking up making conditions not ideal for this spot. With limited options I decided to stay put and hope for the best (I should have known better and had a plan B).   I sat all day and no deer sightings.   If nothing else I did have ample time to arrange my homemade shooting sticks to fit the blind and help me steady my gun that I had never hunted with before…a .450 Marlin Guide Gun. Like most lever actions it is compact and suited for a smaller size pop up blind. It’s 325 grain Hornady bullet seemed a little more than necessary at the 50 to 60 yards I would probably be shooting, but there was always the chance of a monster UP buck showing up and my needing a little extra fire power.

Day two was a repeat of day one with us seated and waiting for daylight. There were a couple of changes though, it was frosty, cold and clear that morning. The kind of frost that clung to everything and sparkled as the sun came out.  It really was a spectacular morning, plus the wind had changed making near-perfect for this stand.  I kept warm & comfortably with my rifle barrel across the shooting sticks & the butt in my lap. My hopes were high that day.  But nothing moved or made a sound, not even a distant gun shot.

I had two windows to watch out of, one down toward the bait and the other to my right where it was open enough that I might see any deer approaching from that direction. Then it happened, I don’t know what time it was but the sun was getting higher and it was almost directly behind me. A good thing to have when deer are in front of you. They can’t see when looking into the sun any better than we can, can they?

Anyway, “”it” happened without any warning.  I was looking toward the back of my shooting lane and I caught a quick glimpse of ‘brown’ moving through a small sunlit opening. I just knew this was a deer and it was clearly moving in my direction. A second later I saw it again, a deer moving through another sun lit opening and I was now asking myself, did I see antlers that time?   This caused me to sit up straight in my chair. My hands were on my rifle & I watched intently for the next bit of movement, its really thick outside my small shooting lane. At about 60 yards a buck stepped into an opening just to the left of the lane. He stood staring in my direction and then at the bait. I knew he couldn’t see or smell me so I waited and tried to count antler points. Three points to one side Gary said. He appeared to be a six point but at this angle I couldn’t tell if he had brow tines. Slowly he turned and headed toward the shooting lane, I was watching through the scope but I still couldn’t tell if he was legal.

The buck then stepped into the back edge of the lane and stood with only his head and neck in the open looking at me, now I could see two small brow tines. So small in fact that I questioned if I should let him walk. Then he turned and walked up to the bait. He stood facing me straight on, eating a little then looking straight at the blind.   How do they know? Maybe he had come by the day before & smelled me, maybe it was scent left from handling the bait. I’ll never know for sure but he stood there a long time facing me straight on. I was glad for the shooting sticks because I was watching him for far longer than I could have held the gun up. Ok, I thought,  “Matt and I had discussed it…we wanted venison and a buck on the new pole we had set up at camp.”   I would wait until he turned and then take my shot.

I waited and I waited. Eat a little, look a little. I even put my gun down for a while, I knew he wouldn’t stay here much longer and depending how he decided to leave it was possible I might not get a shot. I put the gun up to my shoulder and sat with the hammer back, safety off and finger off the trigger, watching through the scope. Then he did it, his head moved slightly to the left and he moved about two feet, it was more like he just hopped sideways. I saw only a little bit of his shoulder and then damn he was facing straight at me again. He was clearly comfortable now as his head was down more than it was up. He must have been chasing does all night or something because he sure seemed hungry.

Then I made a decision, he was basically 50 yards away.  I had sighted in my gun at 50 yards and it was shooting real small groups. I decided to take the shot, head up or down I planned to aim mid neck so that a spine hit would drop him and if it was off a little the bullet would still pass into the chest.

His head stayed down, the cross-hairs were right where I wanted them and I squeezed just like I was at the range. At the shot there was a big spray of white in the blind window, all the frost had been blasted off the edges of the window. The buck simply dropped to the ground with no other movement, onto his chest and belly like he was laying down. Of course his head was the first thing to hit the ground but I was a little surprised that he didn’t kick or at least roll over. That couldn’t have worked any better I thought. I watched him through the scope after chambering a second round. One back foot moved up and down about three times and then he was still. No tracking this time, I didn’t relish the thought of crawling through the tangle of swamp he had just walked out of.

After a few minutes I stepped out into the sunshine and stretched my legs before walking down to the deer. He was laying directly on top of what was left of the bait with almost no blood.  I pulled him up onto my low ridge and down the other side to tag & do the field dressing. There was even a small pool of water for me to wash my hands when I was done, after I broke up the ice on top. Then I dragged him into a shaded spot and stood looking at my buck for a few minutes.

No bragging rights with this one I thought but in reality it was my biggest UP buck and it was the first “ELO”  buck taken. Nothing wrong with that. By the way, that big .450 bullet struck just the edge of the spine/neck and then did just what I had hoped, it angled down through the chest and exited right where the sternum ends. Really as clean as it gets. All of the neck meat went into sausage and the rest was untouched. 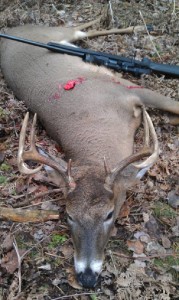 Gary & Matt were  nice enough to drag him out for me shortly after sunset.  A much nicer buck was taken not far from there the second week of the season by a lucky hunter from Florida, that story is also shared within this blog.  My congratulations to him, even if he did come in second place!