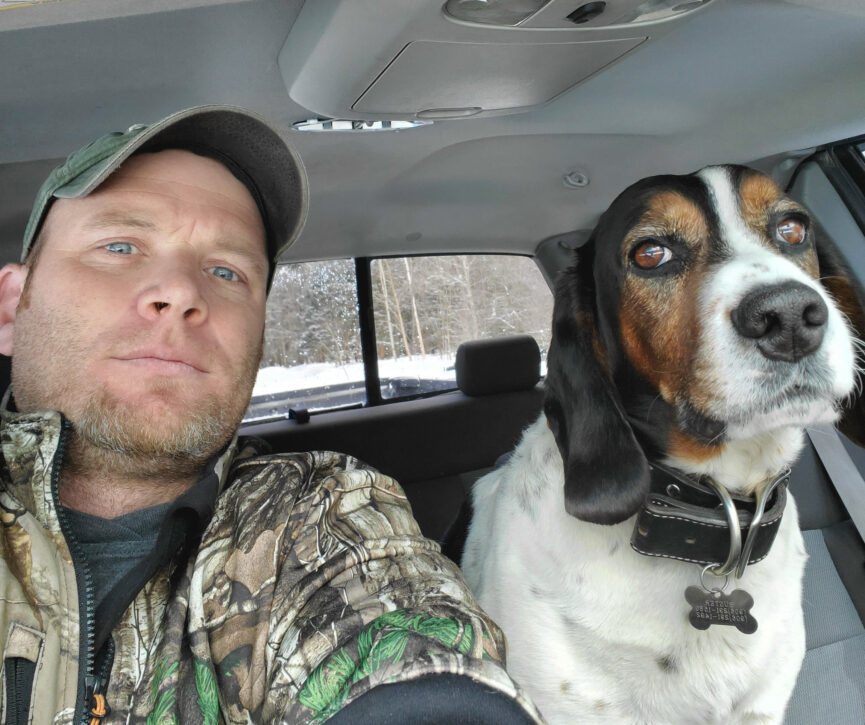 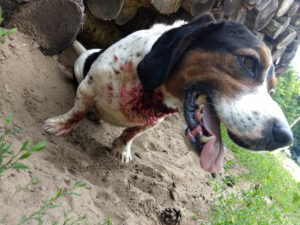 Brian Krupla from Newberry, Michigan has a good reason for wanting wolves in the Great Lakes Region removed from the endangered species act. Last summer, he was forced to kill a wolf to protect himself and one of his dogs and he’s concerned about the safety of his daughter. Krupla could have been the state’s first instance of a wolf attacking a human in modern times on August 2, 2019, if he had not armed himself before trying to rescue his dog from a wolf about 10:00 a.m. that morning.

Brian had let two of his rabbit dogs outside, which are mixed breed beagles, and before long “both dogs went nuts.”

“The female was near the house barking and the male was facing the woodline and barking,” Brian explained. “A wolf then came out of the woods and grabbed the male and started carrying him off. I keep a loaded 12 gauge in the house for protection. I grabbed that and ran out to try to save my dog.”

Krupla ran after the wolf and covered about 100 yards when he saw the wolf had his dog pinned against a stump, trying to kill it. Brian fired a shot toward the wolf to try to get the predator to let go of his dog, and it worked. After the wolf released its grip on the dog, however, it charged Brian.

“The wolf curled off to the left after I shot and then saw me,” Brian said. “After it saw me, it came right at me. I was following it with the barrel of my shotgun. The eyes on him were like right out of a Stephen King Novel.”

When the wolf was 8 to 10 feet away and still coming, Brian shot the wolf with a load of number 8 shot and it fell to the ground. The wolf had to have been close for such fine shot to have that effect on the predator. If Krupla had not had a gun to defend himself, he could have been attacked, too. Fortunately, that was not the case.

With the wolf down, Brian ran to his dog, dropping the shotgun to pick the dog up. The dog’s name is Buster. Besides beagle, he’s got some Bassett and Bluetick Hound blood in his background, according to Krupla. The dog weighed about 40 pounds and was easily carried by the much larger wolf.

Brian said the wolf was long and lanky, about six feet long. He estimated its weight at close to 100 pounds.

“Buster was lifeless when I picked him up,” Krupla commented. “I thought he was dead. I carried him to the house. He came to by the time I got him back to the house. I was relieved he wasn’t dead, but I wanted to get him to the vet as quickly as possible to take care of his wounds.

Fortunately, Buster survived. The heavy collar he was wearing with metal name tags saved the dog’s life. Although Buster had wounds on his neck, the collar prevented the wolf from doing more serious damage. Buster was put on medication to help his recovery.

Conservation officers Michael Evink and Cole Van Oosten visited the scene to investigate what happened. Brian’s shotgun was still on the ground where he picked Buster up. The shell casings from the shots Brian fired were also where he ejected them and blood from the wolf where Brian shot it confirmed how close it had come to Krupla.

Although the wolf had gone down after Brian shot it, the predator had gotten up and left the scene when Krupla carried Buster back to the house. Brian used one of his beagles on a leash to locate the wolf where it died. The wolf had traveled about 50 yards from where Brian shot it.

“It was a bad experience,” Brian said. “It was one of the most traumatic things I have had to deal with in my life. I keep having nightmares about a wolf grabbing my daughter and I can’t catch up with them. I’m thankful that I got my dog, but I’m scared to death to let my daughter play in the yard. My daughter was at a friend’s house when the wolf grabbed my dog. Otherwise, she would have been playing in the yard with my dogs. I carry a pistol 24/7 now for protection.”

A 10-month-old puppy that Brian had disappeared a short time before the attack on Buster and Krupla is now convinced the pup was killed and eaten by a wolf. He said his neighbors are also missing dogs that probably suffered the same fate.

“I used to have chickens and ducks and now those are all gone,” Brian concluded. “Something took those, too. Wolves may have taken them also.”

No charges were filed against Krupla because he shot the wolf in self defense. Conservation officer Evink gave Krupla a verbal warning, however, for shooting the wolf.

DNR large carnivore specialist Cody Norton at Marquette reported that there had been 5 events involving wolves preying on dogs through August of 2019.

Not all dog owners who lose their pets to wolves in Michigan report their losses to the DNR, however, because there is no mechanism to reimburse them for their loss. And because Michigan wolves are listed under the endangered species act, even though they do not qualify for such listing, the DNR can’t do anything about wolves that prey on dogs. There are a minimum of 1,000 wolves in Michigan’s Upper Peninsula.

Due to the fact Brian was able to save Buster from the wolf that tried to kill the dog, Brian and his family were able to enjoy hunting snowshoe hares with Buster last winter.