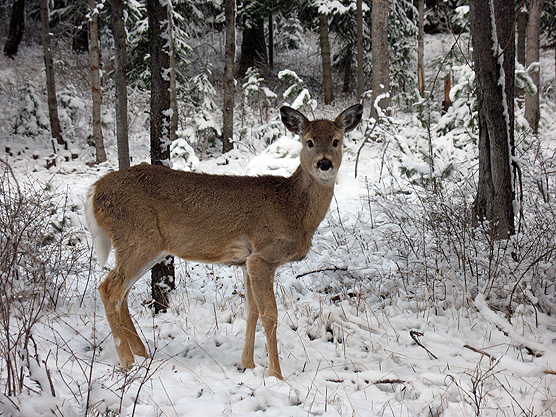 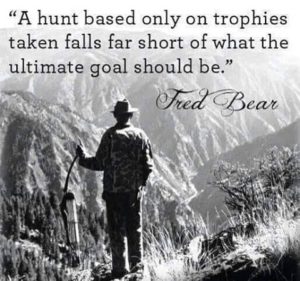 As I sat in my deer stand toward the end of the season I thought a lot about what I might be able to write about that was entertaining or at least interesting. An idea came to me after I had taken a doe one evening…

My Dad offered his blind because he was not hunting anymore and had regularly been seeing deer there. As opposed to my regularly not seeing deer here.  So I loaded up my open sighted 30-30 and drove over to sit for the evening. Dad’s elevated box blind overlooks a small opening in a valley behind his house, a 50 yard shot here would be a long one. I had thoughts of filling my antlerless tag if the opportunity came but never really made up my mind until just before it happened. Three does walked into the opening a little before dark and milled around only 30 yards away. I had my gun out the window and followed one of the bigger deer as it walked across the opening. When it stopped broadside I lined up my sights on it’s shoulder and thought about the best place to aim for a quick recovery. With a scope I wouldn’t hesitate to take a neck shot at this close range but my confidence with open sights and a gun I rarely shoot made me decide on the shoulder shot. The problem was a second deer now stood behind this one. I debated the neck shot again as that target was in the clear. I decided to wait, if a clear shot didn’t come I would not be to disappointed.
Then it happened, my deer was broadside and the other one had turned away giving me a clear shot. I was concentrating on the front sight and was surprised when the gun went off. The deer’s reaction was immediate, she leaped sideways landing about 30 feet away and crashing to the ground. After I chambered a second round she got up and made the same long leap directly in front of me, crashing to the ground again. She didn’t get up this time. It was over in a lot less time than it takes to read about it. Pretty impressive for the mild mannered old 30-30. Two things occurred to me right then, the first was that the lever action really is pretty fast when it comes to a followup shot. I was ready to shoot again before the deer made it’s second leap.
This is where the regret part comes in. I looked down at my deer with feelings of elation at taking the deer cleanly and with a classic old gun (something that I like to do, the same reason I bow hunt) and regret at having killed this deer. This is something that has started in the last few years and I sat for a while thinking about it. The thought to write about the subject came to me but it has been several weeks of thinking rather than writing and then I picked up a copy of Field & Stream. Inside the back cover I read an article on the same subject and the author described my feelings almost exactly. He had taken a doe with his bow and after recovering it he had regrets. He explained how he dreaded the kill but loved the hunt and was back in another tree days later.
I too, love the hunt and was back in the woods days after taking the doe. Not to mention, taking a deer out of a place my Dad said to ‘go and hunt’…pretty cool!  I remember reading another magazine article many years ago an this same subject. The author talked about the importance of the hunt and said that the kill was the anti-climax. I personally have not had the experience of stepping out of the truck and shooting a trophy on opening day but I was with a new hunter who did, twice. I took him out in the dark for his first deer hunt during the youth season. We sat in the ladder stand and whispered as we waited for daylight. Minutes after it got light a nice 8 point walked by and he shot it. The following year it was an even bigger 9 point minutes after daylight came. After we recovered the deer he looked at me and said, I must be the luckiest hunter alive, but my hunt is over already. Some of the best hunting and fishing memories come from some of the hardest hunts with the most difficulty. Another writer said the best hunt he could imagine would be taking a trophy buck on the last day.
I can agree with that because I love the hunt, too.