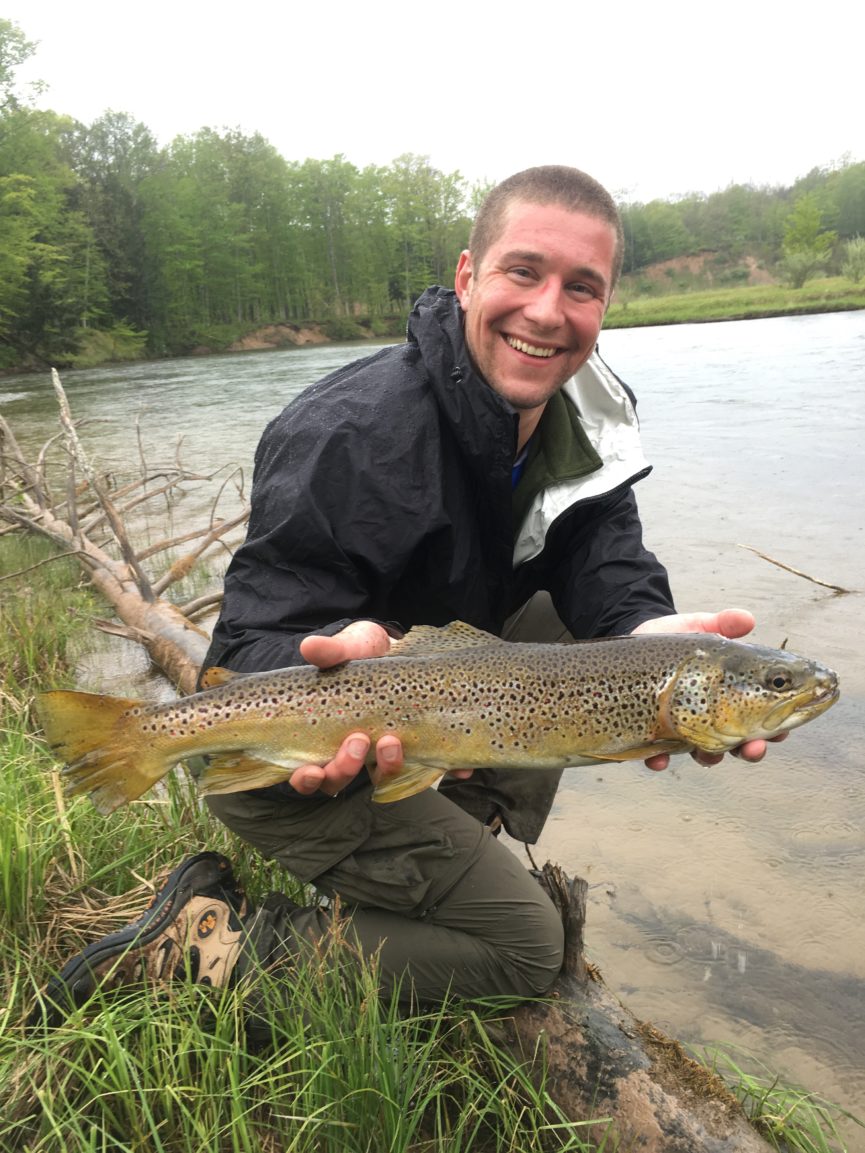 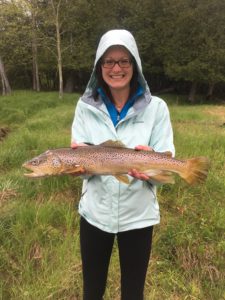 My adventurous wife, Rachel, and I planned a backpacking excursion on the Manistee River Trail this spring. We both agreed to pack our fishing poles in hopes of catching some trout. The weekend arrived and our trek to our camping spot began.  After setting up camp we decided to wet a line. I caught a small brook trout and lost a nice one so I gave my spot up to Rachel and slid downstream so she positioned five feet upstream of me,  right behind a nice slack water eddy. After casting for a while with no action we noticed a big fish splashing around, swimming in circles, and almost beaching itself on the shore of the eddy just upstream from Rachel. The splashing eventually stopped and we thought the large fish was chasing baitfish and eventually retired back to the deep water with a full stomach. We also noticed that this fish had a large wound on its head. From the size and body type of the fish, I thought it was a large sucker that had gotten hit by a boat prop or possibly grabbed by a large bird of prey. After the excitement had worn off and a plethora of casts with no results, we decide to stop fishing and explore the woods for a while in hopes that when we return to the river and that the fish will be biting again. Four hours later we decided to try fishing again…this time in a steady rain. Rachel was on shore behind me watching me wade into the river and cast frantically to no avail. Suddenly we heard splashing from the shore of the same eddy. I was unable to see what was causing the splashing.  Rachel was downstream in the water near the river bank, so she walked over to investigate.  She yelled over to me, “Oh my gosh it’s a big trout, get over here!”  I exited the water and as quietly as possible walked over to her position. As I neared Rachel I saw a huge brown trout that had beached itself on the bank. While setting my pole down I inched over to the bank. The trout didn’t move. With one fluid motion I positioned myself above it and reach down to grab it… then tossed it up on the bank.  After our initial excitement tapered-off we noticed that the gash on the fish’s head was pretty severe; so severe that its skull was exposed and bleeding plenty. After snapping a few quick pictures of the majestic beast, we attempted to revive and release the fish. Unfortunately due to the severe injury it wasn’t able to be released and eventually expired.  Not letting the 27” brown trout go to waste, I quickly filleted it and cooked it on tinfoil over hot coals. It tasted amazing despite our bittersweet encounter.  That fish was likely 15+ years old and smarter than any fish I’ve ever caught (or grabbed). We’ll likely never see a trout that big in our lifetimes and are fortunate that it was able to feed us. Fortune favors the adventurous.