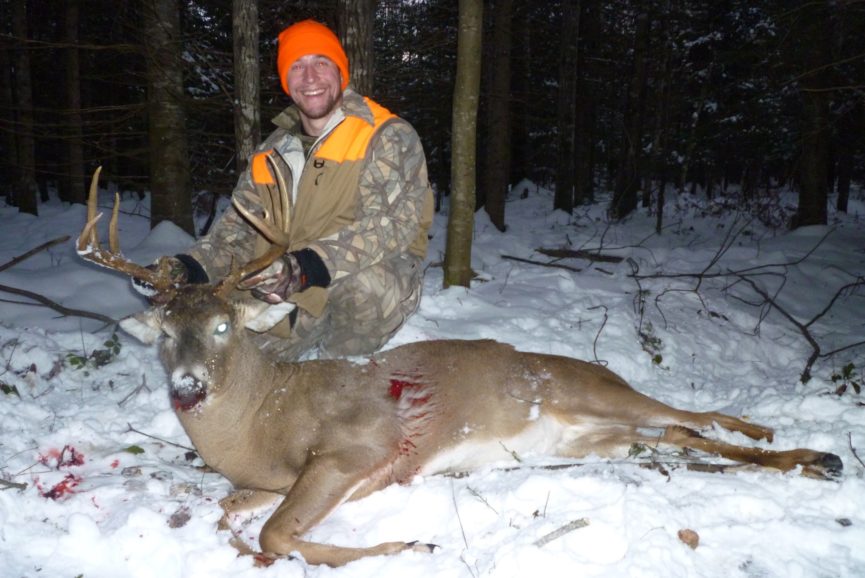 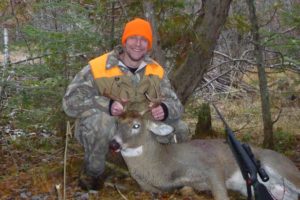 I’ll start this story off with the fact that I’m by no means a hunting expert. I haven’t shot any “Booners” and I’m relatively new to hunting. However, for a newer hunter with limited background and experience, some components of hunting stick out more than others in terms of importance. Although my learning curve was steep, I’ve cultivated a great appreciation for scent control and prevention. I thought I’d share my observations concerning scent control and prevention, and its importance in a successful hunt.

My hunting obsession started late; I was really more of a fisherman growing up. Here, scent isn’t much of a factor. I had gone hunting when I was young, tagging along a few times while my father hunted small game and deer. I thought of it more as a slow methodical walk in the woods, never paying any attention to wind direction, topography, approach angle, etc. I was 26, had already graduated college, and was married when I went hunting with my in-laws for a weekend in Michigan’s Upper Peninsula. I agreed to go under the principle of spending time with family and experiencing their decade-old tradition of November UP hunting. I truly did not really even think of pulling the trigger. We met Gary Morgan from Wild Game Dynasty, got familiar with our hunting areas, and settled in for the evening. I had yet to experience the opening day eve jitters.

The first year, I borrowed my father-in-law’s old hunting bibs and jacket, a reversible set (with a unique camo pattern) that absorbed water better than paper towels and had been stored in the family’s living room closet. I had been shown photos that depicted family members wearing this same set of bibs in past hunts. It seemed like a rite of passage and I was honored, to say the least. I also borrowed a pair of boots, a rifle, and brought my old college backpack into my blind with me.

My first sit was a magical affair. So many squirrels, birds and other wildlife completely unaware of my presence, I felt like I was part of something bigger than myself. My blind was situated in a fork of a downed tree, with tree branches and snow piled up on the left side, so the left door was mostly shut, aside from a 2-inch slit that offered me a very limited view. No point in having it open, I thought. The wind was coming from my left to right consistently throughout the morning and before lunchtime I could hear something approaching from the windward direction. I could hear the clop of hooves as the deer entered into a small creek, and a subtle disturbance of water as the creature crossed the creek and warily approached the small clearing I was vigilantly scanning. My adrenaline level shot through the roof from each cautious step of the mystery creature. I could hear the compression of snow under the weight of each step. I snuck a glance through the slit to see a large mass of brown fur blocking out the light. My hands started to shake and I could hear my own trembling breath. I thought this was it, I was going to get up close and personal with a Michigan wild public land deer. As the large deer began to take its next step, I saw the single hanging strand of thread in the blind window, that was once slanted to the right, begin to waver and then start to move left. The deer stopped its progress into my shooting lane immediately. The silence didn’t last long, a split second actually, as the deer crashed away into the brush, splashed through the creek, and out of my life forever. BUSTED.

One of my life’s philosophies is to worry about the things you can control. This is usually a stress management strategy applied at my daily job or college class work. But if can also be applied to hunting and more specifically, to limiting my human-generated odor. I learned pretty quickly that to be a successful hunter, this was something I needed to take seriously. I can’t control the wind, but I can control how much of my odor I put out into the environment. So I took precautions to ensure this interaction had a different outcome the next time, if I was fortunate enough to get another opportunity.

I bought a tightly locking tote and kept all my hunting gear inside. To take it a step further, inside this tote, I kept my hunting bibs, and newly acquired base and mid layers in a garbage bag with dry leaves and pine boughs to both mask my scent and provide a natural scent for deer. (Note: Rotate the pine boughs or take them out after a week or else they’ll decay and your hunting clothes will smell of mold.) I invested in scent-free deodorant, body wash, and scent killer spray to douse myself in before I entered the woods. I don’t wear my mid or base layer to breakfast because the clothing can pick up the smell of bacon and eggs before going out hunting. When I wash my overcoat and other hunting gear, I use scent-free detergent and never those items outside when my neighbors are mowing their lawns or burning brush. I even eat an apple on the way into my blind to mask my morning coffee breath.

The next year, I shot my first deer, a nice 8-point buck that dressed out at 165 lbs. One year later, I shot a huge 135” 9-point, despite my best intentions at self-sabotage. 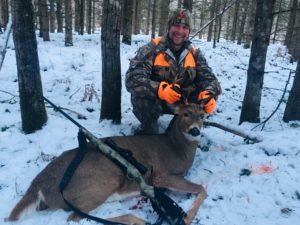 I can’t prove that my scent limiting strategies actually worked, maybe I would’ve harvested these deer even if I didn’t take these additional precautions, but after this latest year’s experience, I am convinced that my preventive measures made a difference.

On a cold morning with a light northwest wind in my face I sat on the edge of a swamp with a shooting lane to my left and one to my right with pines surrounding my little slice of paradise. Around 8:30 a.m., I a group of three does came into my left shooting lane from the same direction as the prevailing wind. They came in from my 10 o’clock, straight at me to 15 yards and crossed to my right shooting lane, grazing as they slowly walked, totally unaware of my presence. The group had one large mature doe, the largest I’d ever seen. I figured she was the matriarch. Another doe in the group was also a large two- or three-year-old, but smaller than the matriarch, and to round out the group, a small curious one-and-a-half-year-old doe. When the bachelorette group reached my right shooting lane, they still were grazing but started to make their way toward my blind some 15 yards downwind. Then continued to get closer and then began to disperse. The matriarch held steady 15 yards away grazing on the right fringe of the shooting lane, the second doe went a little farther past the pines that marked the boundary of my right shooting line and into the fringe brush at 15 yards. It was so thick outside of my shooting lane, I could barely make out her brown body among the thick tangle of branches. The smallest doe continued down the shooting lane cautiously toward my blind to 10 yards and then to 5 yards. I was frozen in place, controlling my breathing, but ready to for the inevitable snort and white flag again. Eventually, she took a few steps into the pines that lined the right side of the shooting lane and progressed past the window of my blind. I could hear her cautiously continue to walk around my blind until she was to my 6 o’clock and completely downwind of my position. My mind flashed to four years ago and the deer that busted me so quickly, but this time I had a different outcome. No crashing away, no snorting, stomping, or signs of distress from behind me. Just the occasional rustling of brush behind me as the young doe explored. Meanwhile the other two does also began to progress down my lane toward my blind and stopped at 10 yards. The matriarch craned her neck left and right to make visual contact with the others that were obscured by the blind. The wind began to swirl and I remained still, controlling my excitement, and trying to keep my whole body from shaking from the adrenaline rush. The matriarch took a few steps toward me and was a mere 5 yards away. Time stood still. While her tail remained at ease, she licked her nose, trying to detect my scent and even went as far as to stomp her foot in the snow. In hindsight, I think this was not to raise the intruder alarm or show distress but rather to say, “Where are you, my little travel companion?” Nevertheless, the small doe behind me did not stir.

After what seemed like an eternity, I began to hear the smallest doe make her way back around the blind from the same direction that she had come from. Then the group of does began to work their way away from the blind toward the back end of the clearing and eventually out of my life forever.

Would the group of does have detected me if I hadn’t taken my scent control measures? Probably.

Would I have had the opportunity a day later to harvest another nice 8-point if I hadn’t taken my scent control seriously? I don’t know.

One thing I do know with absolute certainty: with the right mindset, you are not likely to have an “unsuccessful” hunt. Go out into the woods with an open mind, no expectations, and experience something that makes you feel small.

Special thanks to my father in-law for showing me this awesome pastime as his father had showed him.