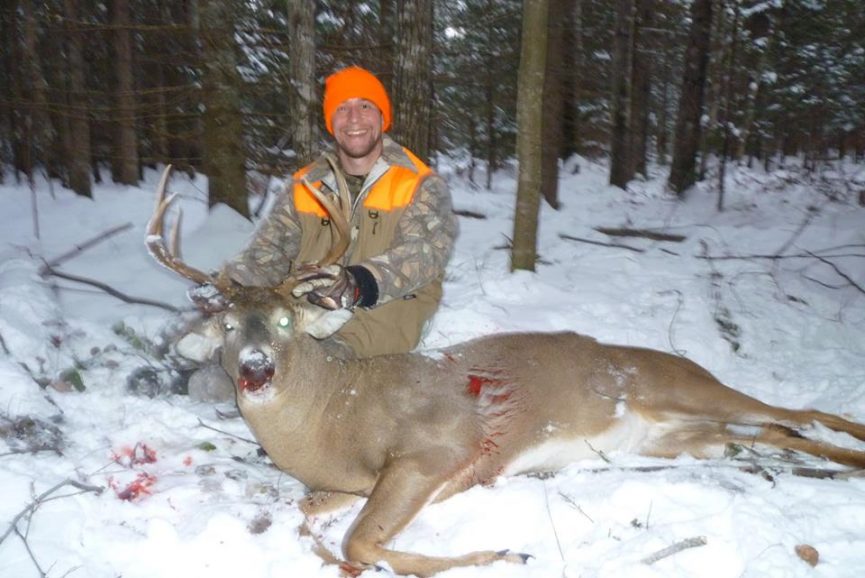 The Smith family has been traveling to Michigan’s upper peninsula for the whitetail deer gun season for well over six decades. When I married into the family I became part of that tradition…a tradition I embraced and hold near to my heart.  This year, 2016, ‘our opening day’ began with the first weekend of the season.  Saturday and Sunday were marred by a snowstorm that had 20-30 mph winds and gusts of 45 mph. This storm dropped 2-4″ of snow on the eastern UP as well as drive temperatures down into the high 20’s low 30’s. The high winds didn’t help the deer movement and caused me to huddle around the heater for longer than normal. For the past day I sat at the spot affectionately called “the gas can”. I sat all day Sunday with no deer movement or fresh sign on the bait pile. I sat at the same spot from sun up till 11 on Monday morning. The “gas can”  didn’t show good deer sign and I had lost confidence so I decided to make the switch. I headed out of the woods, and met up with Gary back at ELO.   Gary drew up a map and familiarized me with the new area I’d be hunting.  I instantly bought into the new spot and caught the passion Gary was passing onto me for eternal optimism.

Driving  to the new spot I scanned the radio for a song that would get me in the hunting mindset. The familiar “Hooo Hoooo” of Take The Money And Run, by the Steve Miller Band greeted my ears. ‘Steve Miller band songs  are as good as any’ I thought and my excitement grew. We parked on the side of the road and walked north into the woods. We entered in the middle of a low lying bog with many young aspens growing from the muck underfoot to far overhead. I followed Gary as he bobbed and weaved through sticks and muck to the closest orange trail marker and then the next. We gradually angled right after a 3/4+ walk and headed slightly east. We reached the swamp edge and were engulfed in thick pine trees. The pop-up ground blind was nestled into a downfall on the eastern edge of the swamp facing into a  small, but dense border of mature pine trees that surrounded the swamp. Beyond the trees lay a ridge that acted as a natural funnel.

Arriving at the new spot was an adventure, but my attention quickly turned to deer hunting. As I settled into the ground blind I found the  wind in my face and the smell of rut in my olfactory senses.   I describe it as a combination of farm goats and hay; a horrible description I know, but to any hunter it’s as recognizable as the smell of freshly cooked bacon. Confidence coursed through my veins.  Deer tracks and scrapes were scattered throughout the area. Squirrels, blue jays, and chickadees were raiding the bait pile and bouncing limb to limb. Watching these creatures was entertaining and reminded me of children bouncing off the walls. I used the grunt call off and on for a couple hours, but for the last one hour I sat in silence, statuesque. 3 hours passed with no deer movement. I decided to break the recent silence and let out a loud doe bleed. A few seconds passed and a response to the call came from my right, through thick brush. To further the discourse with the mystery creature, I let out a short “half-bleat” by letting the plunger descend  halfway down the can and then putting my thumb on the hole located on the bottom of the can to activate the call. A few more seconds passed and I heard some rustling from the thick brush, 15-20 yards ahead of me on the right. I looked under the thick brush and see a set of hooves coming into the small clearing in front of the blind.  A large doe, probably 175-180 lbs, emerged from the thick brush. She locked eyes with me and tried to figure out who or what I was. The wind was in my favor and I was frozen in my position. She could tell that something was off but couldn’t prove it her senses and stayed wary as she browsing the vegetation beneath her.   I thought to myself, ‘this is so cool…I’m just glad I got to see a deer today’. Every 5-10 seconds she would look up at me and rotate her head to look back from the thick brush from whence she came, and then back to the ground. Because she kept looking back over her shoulder where she came from I thought that she either had a fawn back there or a buck was following her. I took the time when she put her head down to eat to grab my rifle from the front corner of the blind and place it on my lap. I also took some quick picture and video. I heard some rustling in the heavy brush behind her and she took off. She then reappeared facing the rustling. She returned to putting her head down to eat, looking at me, and then towards the way she came; and the rustling. A twig snapped in the brush and she bolted for good. I looked under the brush to my right and another set of hoofs appeared. These hoofs and legs we’re visibly larger than the does. They stayed stationary for a moment and then started to move out into the clearing. I clicked off my safety because I knew something was about to happen but I had no idea how special it would be. 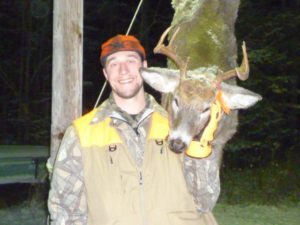 A large brown mass emerged from the thick brush but didn’t fully commit to walk out in the clearing. My heart instantly elevated to my throat as I gazed on the biggest buck I’ve ever seen. His antlers were tall and the main beams as thick as some of the larger tag alders nearby. Attached to the rack was a large head with a neck almost twice the size of my last deer; and my last deer was no slouch in the neck department. His front shoulder to his tail stayed hidden in the periphery of the clearing, concealing the rest of his body. He locked eyes with my for what seems like an eternity but probably couldn’t have lasted  longer than 30 seconds. I had the feeling that he was looking for any reason to take off. I had to shut my mouth, control my breathing to breathe through my nose without making a snorting sound. Being situated downwind and not moving worked in my favor and he began inching out into the small clearing. I began to raise my rifle to my shoulder and rotate the barrel out the window of the blind to face the behemoth… SSCCRRAAPPEE!!!..like nails on the chalkboard, alarm bells, etc!  The sling of my rifle, dangling below the stock rubbed against the bottom of the blind window. I thought I blew it BIG TIME. I froze in place with my arms fully outstretched hovering the rifle in the blind window. Time stood still and I locked eyes again with the big buck; His body was fully tensed and ready to bolt into the safety of the thick brush surrounding the clearing. If it was possible I believe my heart was working at 200% capacity.  We stared  at each other for minutes, which felt like hours, neither of us moving a millimeter. He licked his nose and moved his head to the side to try and figure out where the noise came from and if the noise indicated a threat. For some reason he didn’t flee.   My arms began to quiver from the adrenaline rush which quickly turned into physical strain from holding a rifle in a fully outstretched position. Finally, after a 3 minute stare down, the beast slowly put his head down and I was able to complete the motion of putting the rifle on my shoulder. I put the cross hairs  just behind his front shoulder in preparation to squeezed the trigger. “Don’t mess this up” I thought. A mantra that has served me well in landing effective shots. I exhaled half a breath and squeezed the trigger….BAANNGG!!!

My ears were ringing slightly as the buck trotted away slowly with his tail between his legs. I knew I had hit him good. To this point I hadn’t seen the whole body and the specimen paled in comparison. I followed him with my eyes until he disappeared from sight, then I listened for the rustling of branches. Several seconds later I heard a thud and I knew he went down hard. I sat there in silence for a few minutes processing what just happened and also trying to regulate my heartbeat; which I believe every animal within 2 miles could hear. I couldn’t believe what just happened. The feeling of having that beautiful animal, a gift from God,  so close and to experience that stare down where thousands of outcomes are possible is a feeling I can’t describe. It’s more exhilarating than your first kiss. It’s a more accomplished feeling than graduating from school. It’s more intimate than catching a huge fish. The only life event that I’ve experienced that  can compare is getting married due to the blending of all these characteristics.

I ejected the spent cartridge and placed it in my vest for safe keeping. I texted the group that I had shot a monster and got out of the blind to stretch my legs. After taking more time to calm myself down, I walked to the spot where I had shot the buck and was greeted by a line of consistent, firetruck-red, blood drops following the route in which the deer trotted away. The snow helped highlight a visible and consistent blood trail and shot location, made tracking quick. The end of the tracking revealed the deer ran about 40 yards before colliding at the base of a scotch pine.  Definitely a clean kill.  The field dress showed the heart was cut in half. 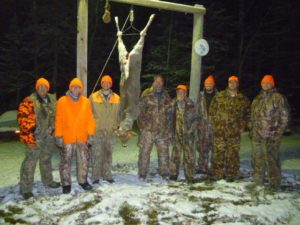 Hunting for me is, for lack of a better word, an experience. To swap stories, connect, and spend time with family and friends is priceless. To sit out in the woods and feel like you are of part of nature, a series of interconnected (mostly invisible) cycles that make up the majority of the world, is enlightening. The cherry on top is to see deer. But the bulk of the sundae is spending quality time with family and sitting in the woods with the feeling of being part of something that is far bigger than you.  Amen!

The drive home was surreal…tailgate down and wearing my Kromer.   Life’s good!